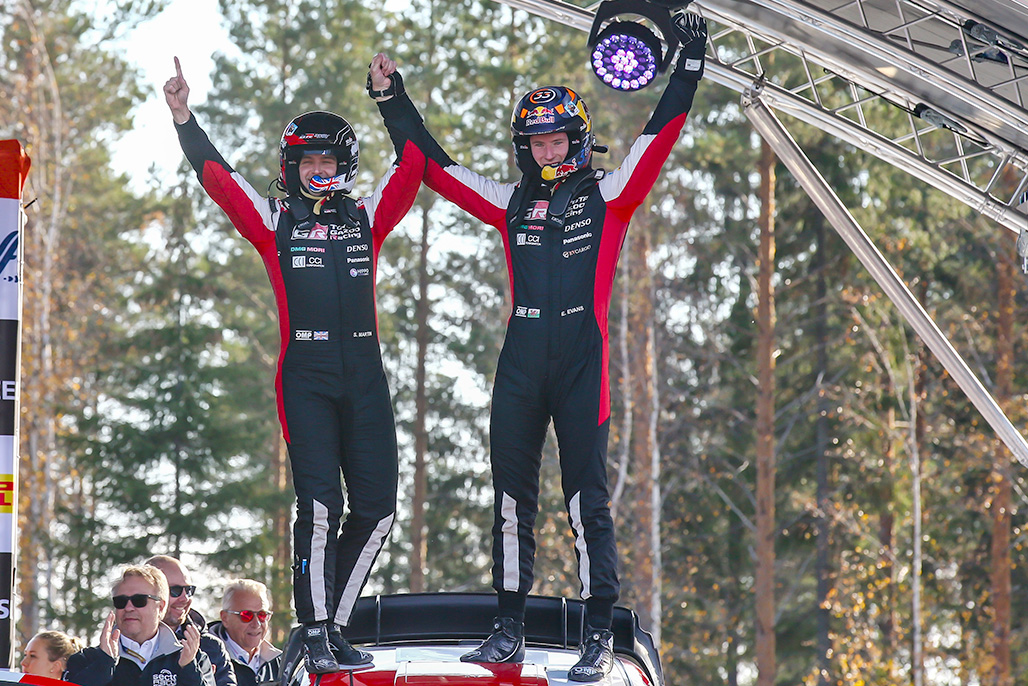 The TOYOTA GAZOO Racing World Rally Team is celebrating a fourth home victory on Rally Finland thanks to an outstanding weekend from Elfyn Evans and his co-driver Scott Martin. The British duo are now the only crew who can catch team-mates Sébastien Ogier and Julien Ingrassia – who finished fifth in Finland – from winning the championship with two rounds remaining, meaning a Toyota driver is now guaranteed to win the title for a third year in a row. The team has also taken a step closer to clinching the manufacturers’ championship.

In the first Rally Finland to be held for over two years, the team faced strengthened competition on the high-speed gravel roads. Evans was its best-placed driver at the end of the opening day on Friday in third overall, having produced a strong performance despite running second on the road. On Saturday morning he surged into the lead with four stage wins out of four, and he took an advantage of 9.1 seconds into the final day.

The result means that the Toyota Yaris WRC – built in the rally’s home city of Jyväskylä – maintains its unbeaten record on its home roads since its debut in 2017. It is the car’s 25th WRC victory in total, on what was its final gravel event before new technical regulations are introduced for 2022. It’s also the 200th WRC podium for Toyota, which becomes only the third manufacturer to reach the figure.

With his second win of the season, Evans reduces the gap to championship leader Ogier to 24 points with a maximum of 60 available. In the manfuacturers’ championship, Toyota’s lead is increased to 61 points.

Ogier succeeded in his main aim this weekend of reaching the finish and banking more points towards the championship, and became increasingly confident with the car after making setup changes on Saturday.

Finishing one place ahead of Ogier in fourth overall was Esapekka Lappi and Janne Ferm in a privately-entered Toyota Yaris WRC – a strong return to the car with which they claimed a home victory four years ago.

After being caught out during Saturday, both Kalle Rovanperä and TGR WRC Challenge Program driver Takamoto Katsuta were able to restart on Sunday and gain further experience from their maiden Rally Finland starts in the top category of the WRC.

Jari-Matti Latvala (Team Principal)
“To win Rally Finland is always very special and even more so for our team, so we are really happy to win here again. The competition was stronger here this year, but the performance of Elfyn shows that we had a fast car. He was not necessarily one of the favourites to win but he proved that he was the fastest driver this weekend. He did an incredible job. In the Oittila stage in the darkness on Friday night he found another gear and showed his confidence, and after that he was able to take the lead and control it. He can be very proud of his victory. In the drivers’ championship it’s now only between Seb and Elfyn, and the manufacturers’ championship is looking very good for us.”