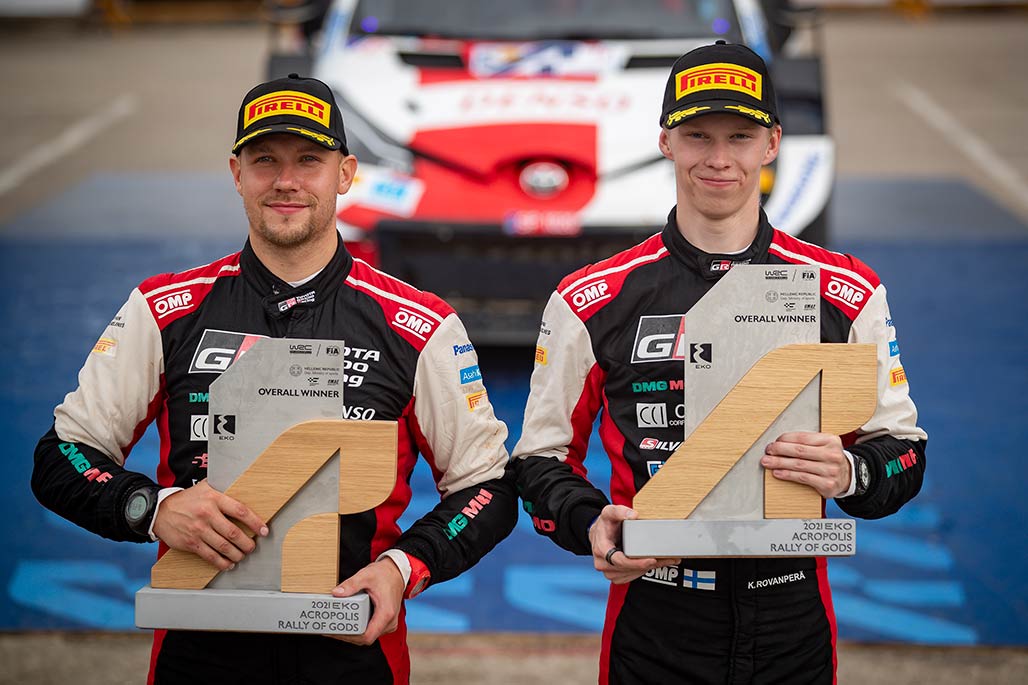 TOYOTA GAZOO Racing World Rally Team’s Kalle Rovanperä has claimed a second outstanding FIA World Rally Championship victory in three events after conquering the legendary Acropolis Rally in Greece at his first attempt. Sébastien Ogier completed a double podium finish for the Toyota Yaris WRC, strengthening both his and the team’s positions at the head of the championship standings.

On the return of the WRC to Greece for the first time since 2013, Rovanperä and Ogier formed part of a top three covered by just 3.9 seconds at the end of Friday. A storming start from Rovanperä and his co-driver Jonne Halttunen, in which they won all four stages in the opening loop, allowed them to make a gap to their opposition, and they led by half a minute going into the final day.

Rain brought challenging conditions for the final day, but Rovanperä produced an incredible stage win in the day’s opening Tarzan test, completing it 14.1s faster than anybody else despite having a mixture of hard and soft tyres fitted to his car. Rovanperä then went on to seal the victory in style on the shorter second running of Tarzan with the fastest time in the Power Stage.

The Toyota Yaris WRC locked out the top three places in the Power Stage, with Elfyn Evans second fastest and Ogier third.

After their closest championship rivals hit trouble on Friday on the notoriously gruelling stages, Ogier and co-driver Julien Ingrassia focussed on securing a valuable podium finish while also keeping the pressure on the crew in second. With his sixth top-three finish of the season, Ogier now leads the drivers’ standings by 44 points with three rounds remaining.

Delayed by a technical issue on Friday, Evans and co-driver Scott Martin produced a strong fightback to take sixth overall with their fantastic run through the Power Stage. Evans remains second in the drivers’ standings.

Thanks to a fifth double podium result of the year and the bonus points from the Power Stage, the team has increased its manufacturers’ championship lead to 57 points.

Jari-Matti Latvala (Team Principal)
“This was a weekend where we didn’t expect to win. I was really happy to see the performance from the start from all of our drivers. Kalle especially showed amazing speed and it was great to see how calm and mature he was the whole weekend. Sébastien once again did a great performance, driving like the champion he is and gaining the points both for his own championship and for the team. Elfyn unfortunately had a problem in the beginning of the rally, but he came back and did an amazing performance in the Power Stage, so I’m really proud of all our drivers.”
Press release Toyota GAZOO Racing WRT