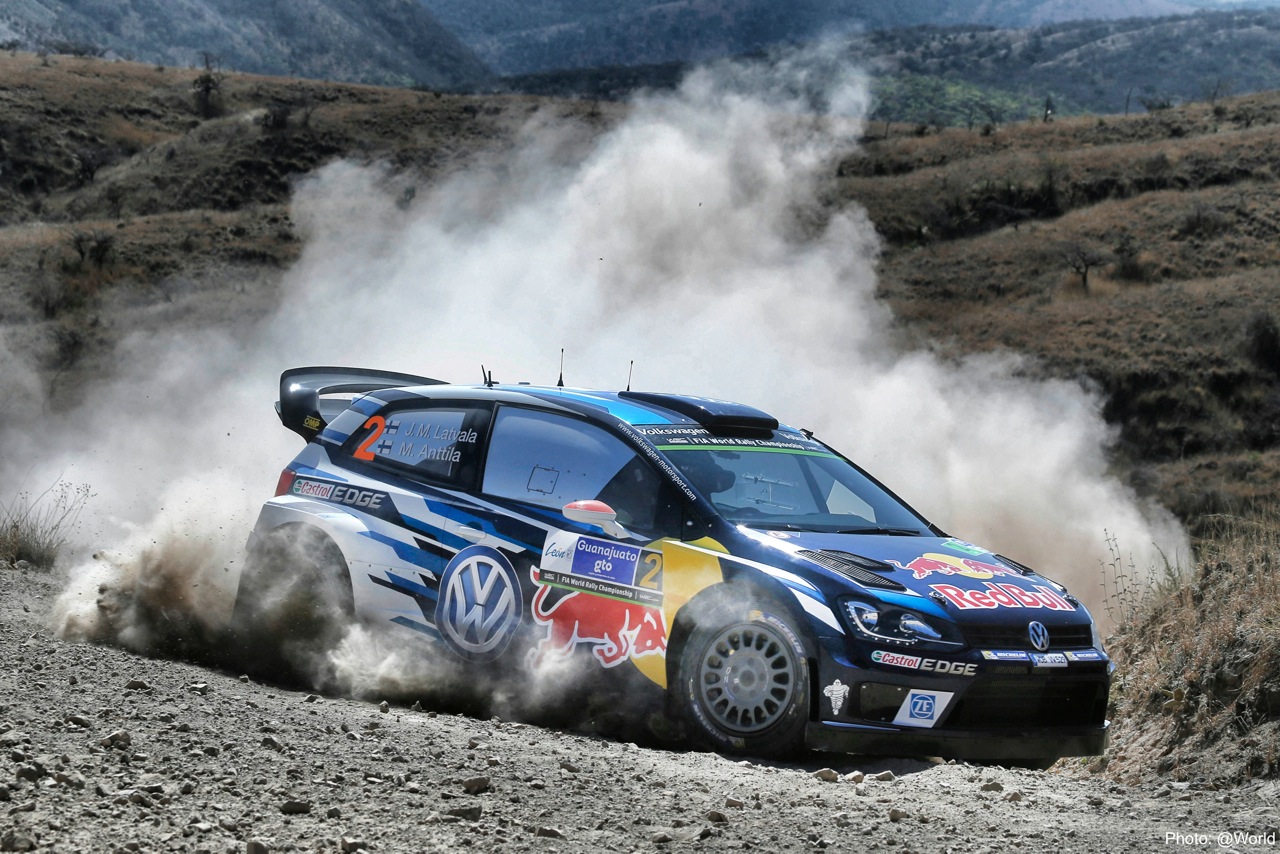 The fans call him “La Bala” – the bullet. Jari-Matti Latvala and his co-driver Miikka Anttila really lived up to this affectionate nickname in the first third of the distance at the Rally Mexico. The Finnish duo snatched the lead ahead of their Volkswagen team-mates Sébastien Ogier/Julien Ingrassia (F/F) on Friday at the third event of the season in the FIA World Rally Championship (WRC). Andreas Mikkelsen/Anders Jæger rounded off the strong team result with fourth place. The cornerstone of success – all of the day’s best times went to Volkswagen – the three Polo R WRC duos opted for a clever and daring tyre selection. Ogier and Mikkelsen went for soft Michelin competition tyres as the first drivers to take to the track in the morning. Latvala, who was eighth to take to the special stages, went for a combination of soft and hard tyres. All three of the drivers went for hard tyres in the afternoon. And considering their starting position, this was the perfect choice for the Volkswagen duos.

Two passes of “El Chocolate” with its ascent to 2,743 metres above sea level, two passes of “Las Minas” and three passes of the spectator stage nearby the service park in Léon – the Rally Mexico really put man and machine to the test. Latvala/Anttila take an advantage of 32.1 seconds over Ogier/Ingrassia into the rally Saturday, which with nine special stages and 152.40 kilometres against the clock is the longest day of the Rally Mexico. Dani Sordo/Marc Martí (E/E, Hyundai) follow them with a deficit of a further 43.5 seconds in third place, ahead of Mikkelsen/Jæger.

Jari-Matti Latvala, Volkswagen Polo R WRC #2
“All in all it was a very positive day for me. Naturally my starting position gave me an advantage in the morning in particular, but it was far from an easy day. On the first pass of the “El Chocolate” stage, it was very slippery in places and I couldn’t tell whether I was fast enough. But I kept my rhythm and that was the right decision. And in the afternoon I even extended my lead with the right combination of risk and caution. The starting position is very good, but there is still a long way to go.”

Jost Capito, Volkswagen Motorsport Director
“A fantastic day for Volkswagen in Mexico, and I think that we put on a great show for our many fans on the special stages and in the service park, and in particular got great results. A perfect team performance was required today. The weather crew collected the data in the morning, the engineers and drivers made an extremely clever tyre selection together, while taking the different starting positions of our drivers into account. The fact that we finished the first day with a one-two lead and fourth place was far from guaranteed. The fact that we achieved this makes me proud. I take my hat off to our drivers – all three of them delivered a top performance today.”

… two product presentations for Volkswagen Mexico. During the rally around Léon, two new sporty models were unveiled on the North American market. The Polo GTI was presented before the ceremonial start in Guanajuato, and the official presentation of Passat R line took place in the service park. The two presentations underline the annual great involvement of Volkswagen Mexico in the third WRC event.

… a very pleasant stop. On the way to the special stages on Friday morning and afternoon, the rally route went straight past the Volkswagen engine plant of Silao. All of the approximate 600 employees at the plant lined up for the three Volkswagen Polo R WRC drivers of Ogier, Latvala and Mikkelsen and cheered on their “colleagues” from France, Finland, and Norway. The drivers thanked them with a brief stop and a mini autograph session before heading to the legendary “El Chocolate” stage.