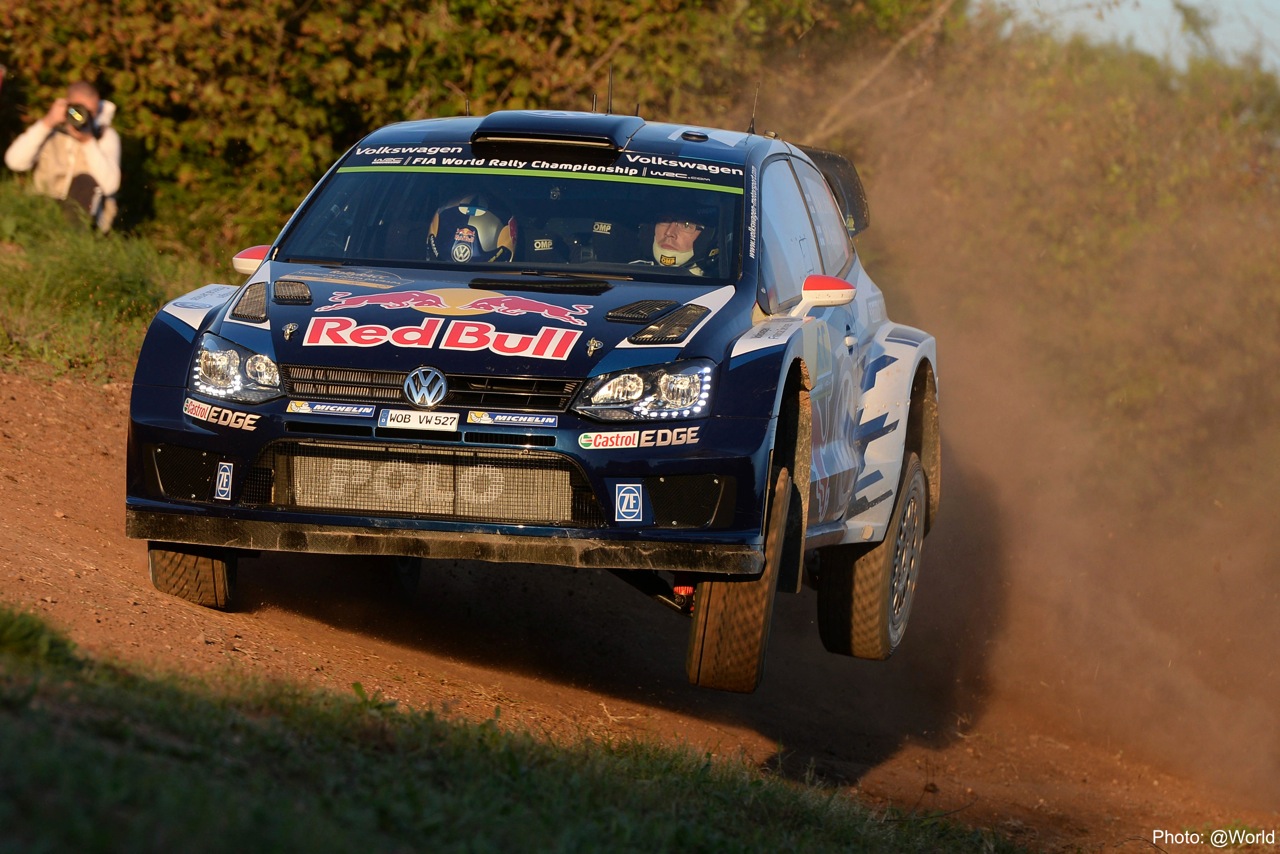 May the best man win: Volkswagen lines up with three winning crews at WRC finale

Three natural born winners striving for the perfect end to the season: Volkswagen is all set for one last big push at the 13th and final round of the 2015 FIA World Rally Championship (FIA). The old and new world champions* Sébastien Ogier/Julien Ingrassia (F/F), Jari-Matti Latvala/Miikka Anttila (FIN/FIN), who have won three times this season and are currently second overall, and Andreas Mikkelsen/Ola Fløene (N/N), winners for first time on their last outing in Spain, have nothing to lose and are out to put the icing on the cake at the end of what has been a successful season for all three pairs. They could yet equal one of Volkswagen’s records in the forests and hills of Wales, which traditionally form the backdrop for the Rally Great Britain. 11 of the 12 rallies to date in 2015 have been won by the Polo R WRC. Should Volkswagen claim a 12th victory of the year, it will equal its own record of 12 wins from 13 rallies, which it set in 2014. With a total of 24 podium finishes, the 2015 season has already been more successful than last year. However, the task will be far from easy: the damp, muddy and slippery gravel roads that are typical of Wales make the Rally Great Britain a unique challenge on the WRC calendar. 19 special stages and a total 310.15 kilometres against the clock await the competitors in 2015.

“What we have achieved this year is incredible. Out of twelve possible wins, eleven have gone to Wolfsburg,” said Volkswagen Motorsport Director Jost Capito. “So there’s no doubt that we want to be right at the top again in Wales. And in line with our principle: may the best man win. Without any team orders at all, we can already look back on a year in which all three drivers and co-drivers have won for us. All three of them will try to shine once again in Wales – preferably with a win – and carry this momentum into the next season. So purely from a Volkswagen perspective it will be a very interesting rally. And our rivals will also want to end the season on a positive note – and make our lives as difficult as possible.”

Fun in the mud: the classic with unique conditions

The rally in the north of Wales will not be a stroll in the park: “Gartheiniog”, “Aberhirnant” and “Alwen” – as Welsh as the names sound, the special stages through dense forest are real humdingers and require the utmost concentration. Not least because of the weather conditions, which are difficult to predict, making the traditional event on the island one of the biggest challenges on the calendar. The surface in Wales is just as unpredictable as the weather is unforeseeable. On more than one occasion in recent years, the surface has transformed from gravel to mud in a matter of minutes. Just 19 special stages and 310.15 kilometres against the clock await the drivers and co-drivers this season, and most of them should still be more than familiar: almost 90 per cent is the same as last year’s route. This will benefit anyone who has hung on to their pace notes from last year.

Still hungry: what Volkswagen can still achieve in Wales

The Polo R WRC has contested 698 special stages since its debut at the 2013 Rally Monte Carlo. It will reach the 700 mark on the second stage of the Rally Great Britain – “Sweet Lamb”. However, another milestone is within sight in Wales: so far, the Polo has 489 stage wins to its name. A strong performance could see Volkswagen rack up stage win number 500. However, the three Volkswagen riders will really have to put their foot down to pull off this remarkable achievement: they have just 19 special stages, in which to reach the next milestone at the Rally GB.

Volkswagen has its sights set on another achievement in Great Britain: win number 12 of the season. Volkswagen is currently the only manufacturer in the history of the World Rally Championship to have achieved a round dozen victories in one WRC season – in 2014. While Volkswagen’s three winners – Ogier, Latvala and Mikkelsen – could equal this figure, they have already surpassed one of the Volkswagen team’s own records: 24 podiums from this season’s 12 rallies to date is already more than last year, when they notched up 23 top-three finishes. In total, the Polo R WRC has claimed 65 podiums in 38 rallies, including 33 victories.

Two-man battle for the runner-up spot in the WRC: Latvala vs. Mikkelsen

The outstanding level of success enjoyed so far in the 2015 season means one thing is already certain: the Driver, Co-Driver and Manufacturer titles all go to last year’s world champions Sébastien Ogier, Julien Ingrassia and Volkswagen Motorsport. Another certainty is that, as in 2014, the top three positions in the Driver and Co-Driver competitions will be occupied by Volkswagen crews. The only question still open is who will finish second. In pole position in the race for the runner-up spot are Jari-Matti Latvala and Miikka Anttila, who go into the final round with a 24-point lead over Andreas Mikkelsen and Ola Fløene. A maximum 28 points are up for grabs in Wales. Mikkelsen/Fløene’s only hope of snatching second place in the championship is to win the final rally of the year. For Latvala/Anttila, another four points would see them end 2015 as the runners-up in the World Championship.

“The special stages at the Rally Great Britain mainly run through forests and are fast and flowing to drive. I like that because it reminds me of the rally in Finland. That is not the only reason the Rally Great Britain is like a second home rally for me. I associate a lot of great experiences with Wales: I made my WRC debut there in 2002, and won the rally in 2011 and 2012. I would obviously love to repeat that feat this year. Miikka and I had a few problems in the first few rallies of the year. However, we turned a corner together and are now looking to crown our successful second half of the season with a good result. A successful end to the season would allow us to take even more momentum into the ‘Monte’ next year. That is definitely our goal. I would like to take this opportunity to say a big thank you to everyone in the team. They have done an outstanding job all year. We will now push as hard as we can one final time, before we head off for a hard-earned break.”