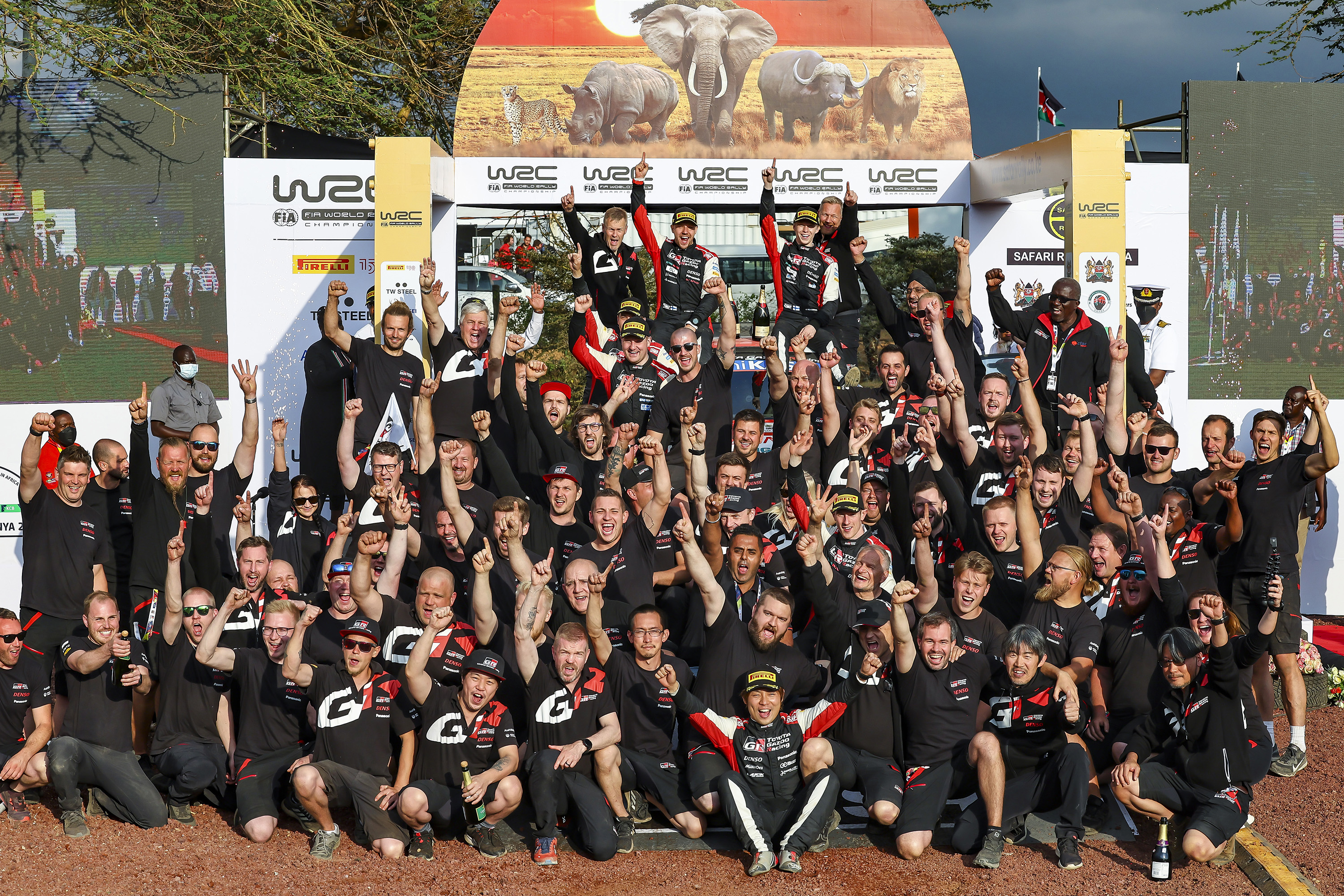 TOYOTA GAZOO Racing has claimed a historic result at the legendary Safari Rally Kenya with Kalle Rovanperä leading a remarkable clean sweep of the top four positions for the GR YARIS Rally1 car. Elfyn Evans and Takamoto Katsuta joined him on the podium with Sébastien Ogier in fourth.

It is also a landmark 10th victory for Toyota on the famous African event, and the first time it has achieved a 1-2-3-4 finish in the WRC since the very same rally in 1993. Only once has any other manufacturer achieved the same feat in the championship in nearly three decades since.

In its second running since returning to the WRC calendar last year, the Safari delivered even tougher conditions, including deep ‘fesh-fesh’ sand on Friday and wet and muddy surfaces on Saturday in addition to the ever-present rocks and stones. It was by far the hardest challenge yet for the new generation of hybrid-powered Rally1 cars, but the GR YARIS survived everything that the Kenyan terrain could throw at it to remain reliable and dominate the weekend without any major issues. The next best-placed car finished eight-and-a-half minutes adrift of the Toyota quartet.

Rovanperä had an early scare when he ran wide on the very first corner on Thursday’s opening super special in Nairobi and knocked a tyre off its rim. But he and co-driver Jonne Halttunen ran faultlessly thereafter on the way to their fourth victory in six rounds, increasing their championship lead to 65 points.

Evans and his co-driver Scott Martin also performed superbly and ran their team-mates close for the victory, remaining within 20 seconds of the lead until the rain hit on Saturday afternoon. They finished up 52.8s away as they scored their second podium of the season.

TGR WRC Challenge Program driver Katsuta once more drove an excellent and smart rally in the demanding conditions of Kenya to claim his second career podium, one year on from taking his first at the very same event. It’s also a maiden podium for his co-driver Aaron Johnston, the pair entered under the TGR World Rally Team Next Generation banner.

Ogier, the 2021 event winner, led for most of Friday in the defence of his crown until he had to stop and change a tyre on the day’s final stage, losing over two minutes. He and co-driver Benjamin Veillas fought back to fourth overall and, with their team-mates focused on reaching their finish, set the third-fastest time in the rally-ending Power Stage to add to the team’s points haul from the weekend. Its manufacturers’ championship lead has increased to 62 points.

Jari-Matti Latvala (Team Principal)
“To achieve a 1-2-3-4 here at the Safari Rally is an exceptional result. It’s nearly 30 years since Toyota managed the same feat here in Kenya with the Celica and I can only thank our team and our drivers for the superb job they have done. When we were developing the GR YARIS Rally1 we focused above all on making a really strong and reliable car. This was really the most important thing on this event and the car has worked really well in such difficult conditions. Our drivers have also driven this rally exactly the way it needs to be driven, which is in a very smart way, and it was great to see them all thinking about the result for the team rather than their own personal ambitions.”

What’s next?
Rally Estonia (July 14-17) takes place over fast and smooth gravel roads with many crests and jumps, as well as some more technical sections.