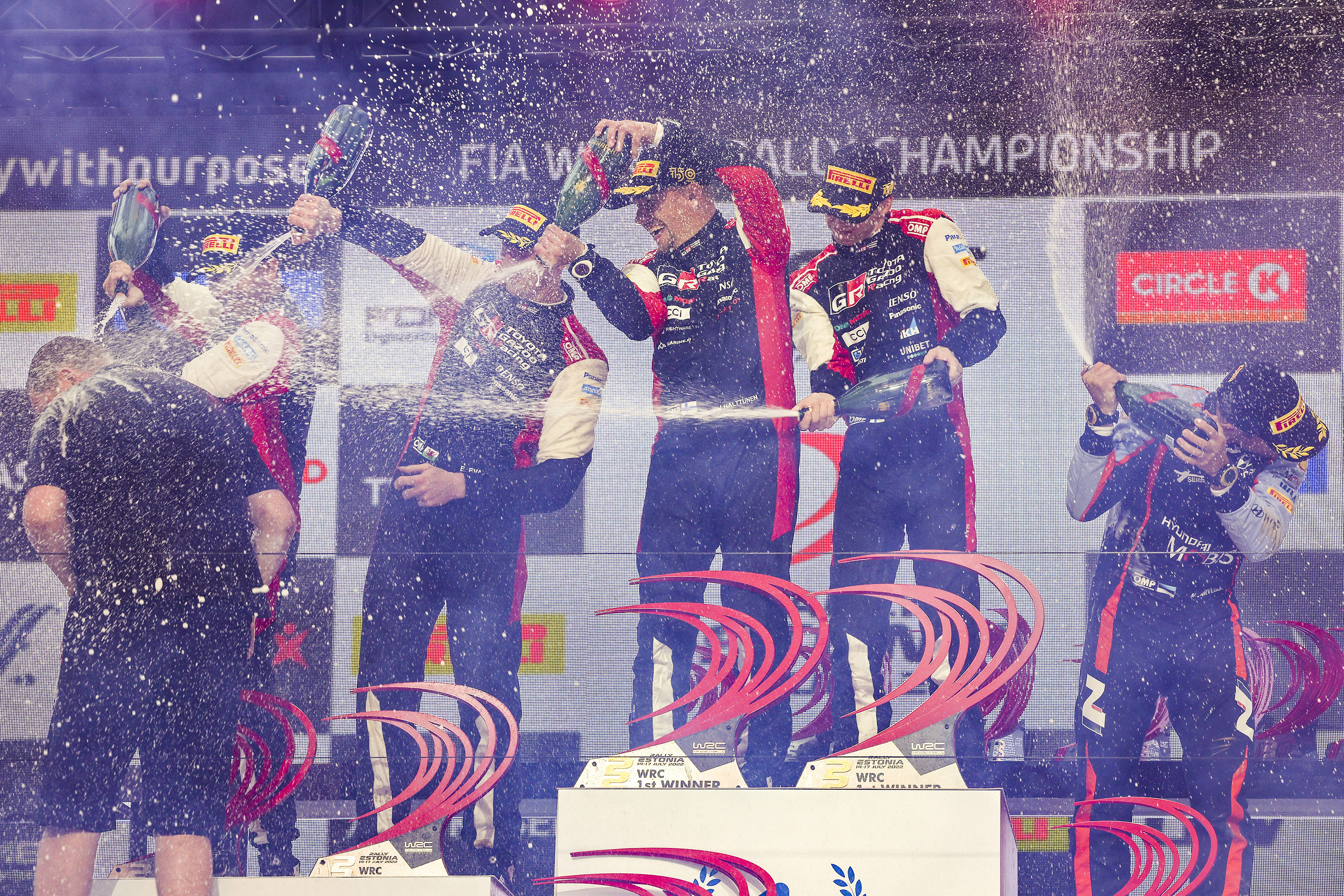 Kalle Rovanperä has continued his remarkable 2022 season in the FIA World Rally Championship with his fifth victory from the last six events, leading a one-two finish at Rally Estonia for the TOYOTA GAZOO Racing World Rally Team after a high-speed battle with team-mate Elfyn Evans.

After a series of rougher gravel events, the smooth and fast stages of Estonia provided a test for the outright performance of the new generation of Rally1 cars, one the GR YARIS Rally1 HYBRID passed with flying colours by dominating the weekend. It recorded the fastest time in all 22 full-length stages, beaten only narrowly in the two short super special stages held on Thursday and Saturday evenings.

The weather ensured a challenging weekend from start to finish with short and sharp rain showers making conditions extremely changeable and unpredictable for the drivers.

Evans excelled in a mostly dry start to Friday, winning all four stages during the morning to lead Rovanperä, who did well sweeping the loose gravel stages as championship leader and then capitalised on wet weather in the afternoon to move ahead. He and co-driver Jonne Halttunen were then dominant through Saturday, winning seven stages in a row and continued that form into Sunday morning.

The worst of the weather however was saved for the final two stages. Both Rovanperä and Evans were more than half a minute slower than some competitors as conditions worsened during SS23 but were able to maintain their overall positions. They then made the most of improving conditions as the sun came out for their runs at the deciding Power Stage, Rovanperä setting the best time by a huge 22.5 seconds over Evans to claim maximum points for himself and co-driver Jonne Halttunen, who increase their championship lead to 83 points after seven of 13 rounds.

Evans and his co-driver Scott Martin have climbed to third in the standings after a second straight second-place finish and their third of the season.

With the Power Stage result, TGR also scored maximum points towards the manufacturers’ championship this weekend and now lead by 87 points.

Fighting back after losing time when a tyre came off its rim on a landing on Saturday, Esapekka Lappi won two stages on Sunday and gained sixth place overall on the final stage, where he set the fourth-fastest time despite experiencing considerably worse conditions than his team-mates.

Takamoto Katsuta continued his unbroken scoring record so far in 2022 in his TGR WRT Next Generation entry by finishing fifth overall, improving his confidence and performance over the event despite the difficult conditions.

Jari-Matti Latvala (Team Principal)
“Kalle keeps on surprising us every time with what he is able to do. The conditions were extremely difficult in the Power Stage especially, but the more difficult the conditions, the stronger Kalle seems to be. But we also need to remember the whole team effort that has gone into this result: To win so many stages this weekend proves that the GR YARIS Rally1 HYBRID is fast as well as reliable, with all four cars inside the top six at the finish. Elfyn delivered another very solid performance with consistency and speed, and both Esapekka and Takamoto also had good runs to the finish. We can be very grateful to have the best drivers and the best team in rallying.”

What’s next?
Rally Finland (August 4-7) is the fastest rally on the calendar, run over smooth gravel roads containing many jumps. It’s also a home rally for TGR WRT, which has its headquarters close to the service park in Jyväskylä and has won each of the last four editions.