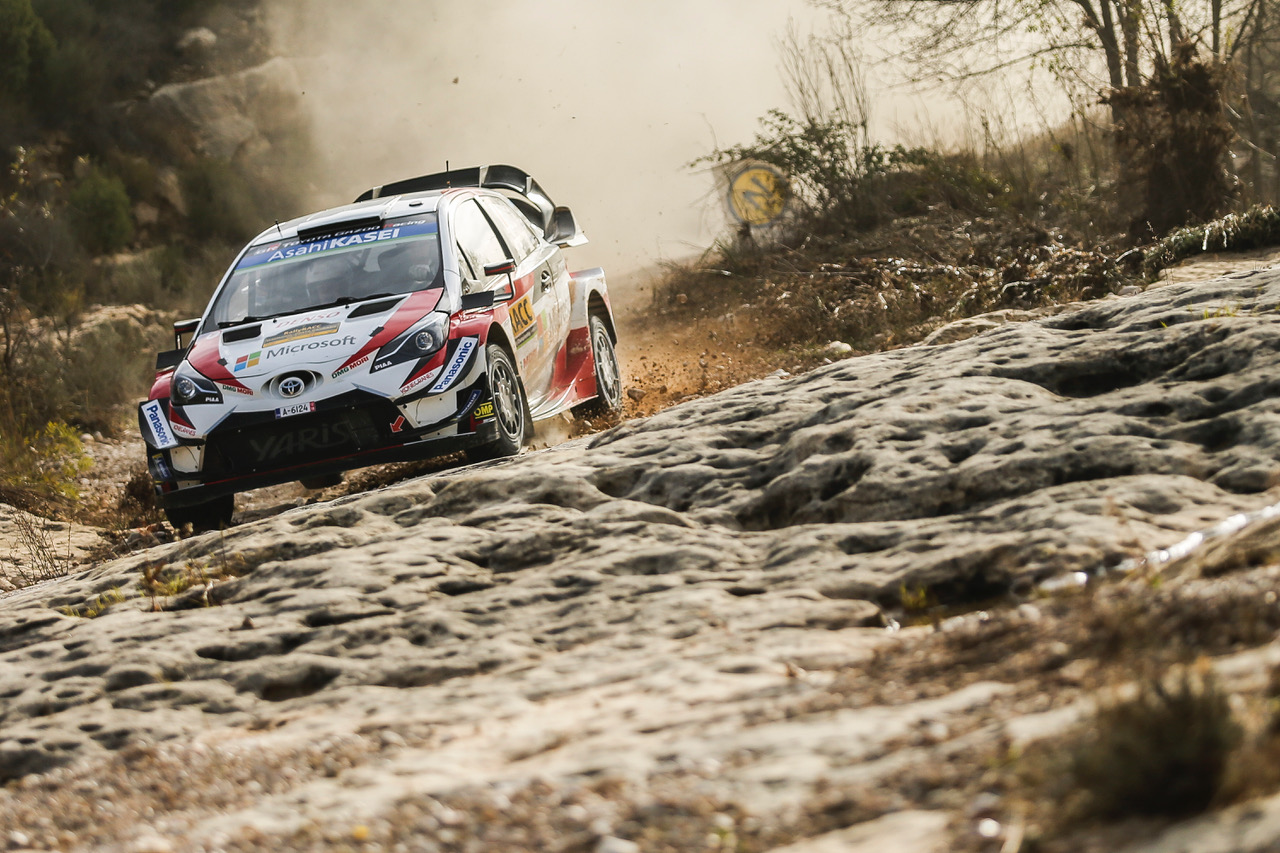 Ott Tänak leads Rally de España by nearly half a minute after a superb performance on gravel on the only mixed-surface round of the FIA World Rally Championship. Tänak and team-mate Jari-Matti Latvala both demonstrated the strength of the Toyota Yaris WRC: Latvala displayed rally-leading pace and took three stage wins, even though a puncture unfortunately cost him time in the overall standings.

Tänak won the first of the day’s six stages and then claimed the rally lead on the next test, where Latvala set the quickest time to move up to second place. Latvala was on course for another stage win on the longest stage of the day, the 38.85-kilometre mixed-surface La Fatarella-Vilalba test, when he sustained a punctured rear-left tyre that cost him approximately 50 seconds. This gave Tänak an overall lead of 11.7s, which the Estonian extended to 26.8s by the end of the day. His performance boosts his chances in the drivers’ championship, after building a significant margin over his two title rivals with two days on asphalt remaining, despite being only just behind them at the front of the road order on today’s loose gravel roads.

Latvala’s puncture meant he began the afternoon in 10th place overall but he dominated the afternoon, taking a narrow second place on SS5 before winning both SS6 and SS7. These performances promoted him to fifth place, and only just over 10 seconds away from second position.

Esapekka Lappi experienced a tough day in the team’s third car, ending the day in 10th overall. He set a strong fourth-fastest time on the last stage, however, to be within touching distance of the drivers ahead moving onto asphalt.

Quotes:
Tommi Mäkinen (Team Principal)
“It has been a brilliant day for Ott, who has shown again just how strong he is at the moment. We can see that the fight for the drivers’ championship is most definitely still on, and it’s a really exciting battle between the three drivers. Jari-Matti has driven so well today. He was very unlucky to get the puncture: Without that he could be leading. His confidence is high and I think he is still in a good position. For Esapekka it was more difficult, but I know he is looking forward to the change to asphalt for tomorrow. It seems there is a high chance of rain, but we can be confident because we had a very good test in these kind of conditions before the event.”

Jari-Matti Latvala (Driver car 7)
“I had a very good feeling with the car and with the driving from the very beginning today. The first two stages went well, and the third one was going really nicely too, even on the asphalt where I’ve struggled in the past. Unfortunately, we then got the puncture, which was incredibly frustrating. But we were able to keep the same speed in the afternoon, and this is the most important thing. The driving has been easy and I haven’t had to think about it too much.”

What’s next?
Tonight, the team’s mechanics convert all three Toyota Yaris WRCs into asphalt configuration during a 75-minute service. Tomorrow, the crews will head north east from Salou and tackle the Savallà, Querol and El Montmell stages twice either side of service. The day will end with a short street stage on the seafront in Salou.