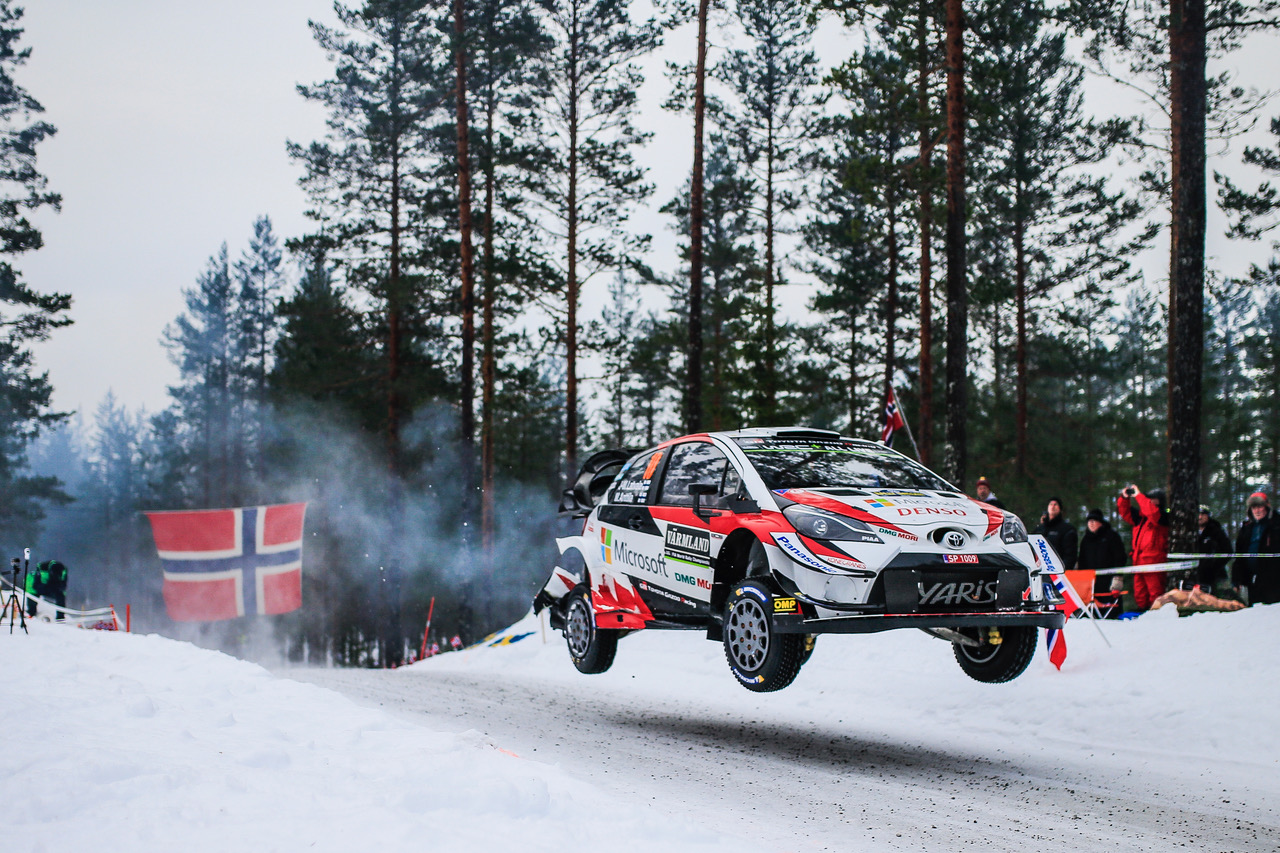 TOYOTA GAZOO Racing World Rally Team drivers Ott Tänak and Jari-Matti Latvala both fought over the lead on the first full day of Rally Sweden, which featured a wide variety of stage conditions amid warmer-than-usual weather in the season’s only full winter rally. Tänak ended the day in second place overall, only two seconds behind the leader.

In the morning, the drivers at the front of the field enjoyed consistent conditions, and Tänak took advantage to win two of the three stages and lead the rally during mid-day service. With the ice and snow thawing in the above-freezing temperatures, the stages featured a combination of gravel and slushy snow for the second pass during the afternoon loop.

Latvala immediately moved from third overall to claim the rally lead on the afternoon’s first stage. He was holding second when he got stuck in a snowbank on the final stage of the day, but will restart on Saturday.

Tänak was disadvantaged by his road position in the afternoon, but made up 11 seconds compared to the leader with a great performance in the final stage.

In his second event with the team, Kris Meeke ended the morning loop in eighth position and then showed strong pace in the afternoon, quickly climbing as high as fifth position. A brief stall at the start of SS7 contributed to him ending the day in eighth, but still part a very close fight for fifth.

Driving a fourth Yaris WRC entered by his own GRX Team, Marcus Grönholm stopped on SS4 after going off the road, but will also restart on Saturday.

Quotes:
Tommi Mäkinen (Team Principal)
“It has been a very challenging day with the conditions but our cars have been performing well. What happened to Jari-Matti this evening was disappointing for everybody. He had been doing a very good job. But Ott has also been doing well, especially with his road position, and I think he is in a really good situation for tomorrow. Kris has been feeling good in the car again and the times were coming during the afternoon, when I think his style was suiting the conditions better.”

Jari-Matti Latvala (Driver car 10)
“For the most part, today was a great day. The car has been really good to drive and I was enjoying a big fight with Teemu Suninen. I was using my tyres a lot which was OK when we had the gravel ruts, but then the last stage was icy with more snow on the top of the surface. I was pushing too hard for the conditions on my used tyres and it caught me out. Now it will be important to get back out there tomorrow and to try and get a good feeling with the driving.”

What’s next?
Tomorrow, the crews venture west from Torsby for a loop of three stages run either side of service that includes the Vargåsen stage, featuring the popular Colin’s Crest jump. The day ends with a repeat of the rally-opening Karlstad super special stage and a shorter ‘sprint’ version of the Torsby test that was first run this evening.