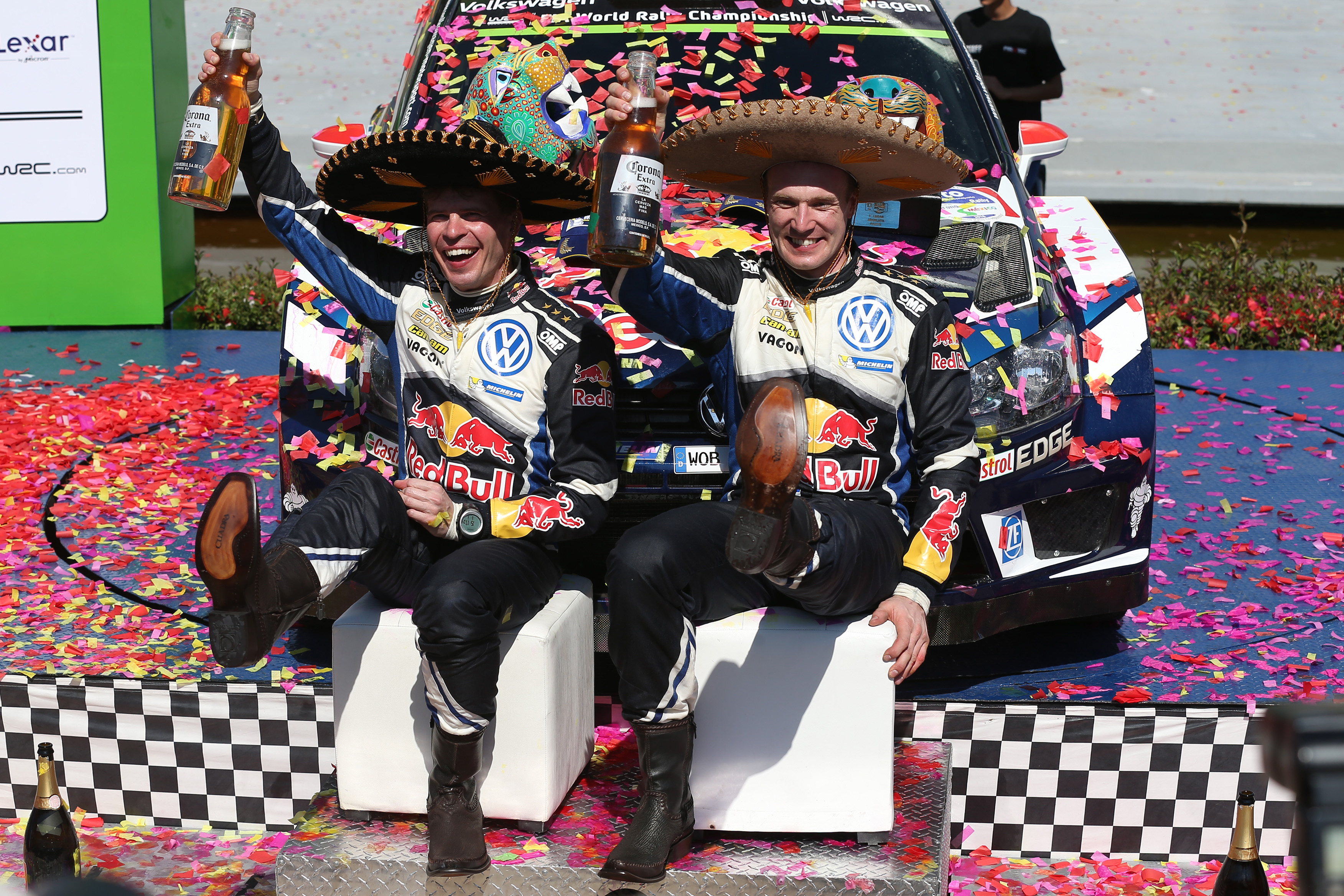 37th victory for the Polo R WRC: Latvala/Anttila win in Mexico, ahead of Ogier/Ingrassia

Volkswagen equals own record of twelve wins in a row in front of 300,000 spectators

Back in business, and making history for Volkswagen in the process – Jari-Matti Latvala/Miikka Anttila (FIN/FIN) claimed an important victory at the Rally Mexico. The Volkswagen duo enjoyed an emphatic return to form, dominating the rally to triumph ahead of team-mates Sébastien Ogier/Julien Ingrassia (F/F) and fight their way back into the title race. They also presented the Polo R WRC with its twelfth win in a row, equalling the longest winning run in the history of the FIA World Rally Championship (WRC). The latest success sees Volkswagen draw level with its own record of a dozen successive victories, meaning the Wolfsburg-based car maker can set a new record at the coming rally in Argentina. The win also marked Latvala/Anttila’s first at the Rally Mexico, and the 16th of their careers.

From the 2015 Rally Portugal to the 2016 Rally Mexico – Volkswagen has equalled its own record. Twelve wins in a row marks the second time the manufacturer has achieved the longest winning run in the history of the World Rally Championship. Volkswagen had previously completed a dozen back-to-back victories with the Polo R WRC between the 2013 Rally Australia and the 2014 Rally Finland. The third longest winning run is held by Citroën, who managed eight successive wins in 2011.

With 37 wins from 42 rallies, the Polo R WRC also remains the car with the highest win ration in WRC history. The World Rally Car from Wolfsburg has now overtaken the Citroën C4 WRC in terms of the sheer number of wins, and is now fourth in the all-time list, behind the Subaru Impreza, Lancia Delta and Ford Focus – although it has contested far fewer rallies.

Battle for podium ends in early retirement for Mikkelsen/Jæger

A fightback that went unrewarded: Andreas Mikkelsen/Anders Jæger (N/N), in the third Polo R WRC, suffered a set-back in the battle for the Drivers‘ and Co-Drivers‘ World Championship. Running fourth, they launched an assault on third-placed Dani Sordo/Marc Martí (E/E, Hyundai) and had successfully brought the gap down before they went wide in a left-hander 32 kilometres into the “Otates” stage on Saturday. They hit a buttress and consequently had to retire from the rally. The Polo R WRC could not be repaired on-site in the Service Park. However, it is now being prepared as planned for the Rally Portugal.

Volkswagen remains unbeaten in Mexico, courtesy of Latvala/Anttila’s win. Sébastien Ogier’s victory in 2013 was the Polo R WRC’s first success on gravel, and was followed by a further two wins for the three-time world champion in 2014 and 2015. Victory for Latvala and Anttila brings to an end a winning run for French drivers that dated back to 2006.

Longest stage of the season, highest point on the WRC calendar

The Rally Mexico is not only littered with superlatives on paper, but also represents an enormous challenge for man and machine. The competitors reached the highest point of the season on the “El Chocolate” stage – 2,746 metres above sea level. The fact that air pressure and oxygen content drop with altitude presents the engine engineers with a huge task. It is also extremely physically demanding for the drivers and co-drivers. Fitness was put to test on the longest stage of the year – “Guanajuato”, which is exactly 80 kilometres long. The last time the WRC featured a longer stage was back in 1986, at the Rally France on Corsica.

The Mexican rally fans deserve a special mention. They carried the competitors through the weekend on a wave of euphoria, not only at the traditionally emotional start to the third round of the season in Guanajuato, but also on the special stages and in the Service Park. This gave Latvala, Ogier, Mikkelsen and the Volkswagen team an extra boost of motivation. The enthusiasm of the rally fans in Mexico knows no bounds and is the icing on the cake at a perfectly organised rally. Volkswagen Mexico’s temporary exhibition area in the Service Park was also well-attended, attracting thousands of fans over the course of the four-day event. 80,000 fans flocked to Guanajuato to watch the start live, whilst a total of 300,000 spectators lined the special stages.

Cherry on the cake to finish: Power Stage points for Ogier and Latvala

Sébastien Ogier and Julien Ingrassia clocked the fastest time on the Power Stage to score three bonus points in the Drivers’ and Co-Drivers’ World Championship. In doing so, they extended their lead to 38 points. Jari-Matti Latvala and Miikka Anttila picked up an extra two points courtesy of second place on the Power Stage. With 27 points to their name, they are now sixth in the overall standings – 50 points behind leaders Ogier/Ingrassia. Andreas Mikkelsen and Anders Jæger left Mexico empty-handed, but are still third in the world championship with 33 points.

Volkswagen increased its advantage in the manufacturers’ standings by 28 points and now leads closest rival Hyundai by 33 points.

Quotes after day three of the Rally Mexico

Jari-Matti Latvala, Volkswagen Polo R WRC #2
“I am very happy and satisfied. This is a fantastic result, not just for me, but for the whole team. After the disappointing results in the first two events, it was important to finally pick up points. I managed that with the win. Naturally, I had a good basis with my starting position this weekend, but the longest rally of the season still had to be mastered. We found a good set-up and also chose the right tactics. My thanks go to my engineer Fabrice van Ertvelde and my mechanics in particular. However, we will by no means be resting on our laurels, rather we will take the momentum with us to Argentina.“

Jost Capito, Volkswagen Motorsport Director
“The Rally Mexico was a total success for Volkswagen – especially as winning here is far from a matter of course. At no other rally do we hit the same heights as here – a Herculean task for the engine department, for whom the thin air poses a tricky problem when it comes to engine management. The rally also features the longest special stage on the calendar. That is also a big challenge for the chassis department and our tyre partner Michelin. We did a top-class job of overcoming these challenges as a team. Our drivers and co-drivers, in particular, deserve the utmost respect. Jari-Matti Latvala and Miikka Anttila made the most of their starting position and intelligently took advantage of being one of the last World Rally Cars onto the route. On the other side of the coin, Sébastien Ogier and Julien Ingrassia superbly overcame the disadvantage of opening the route. All in all, this one-two is a huge effort, and one that we at Volkswagen are very proud of.”