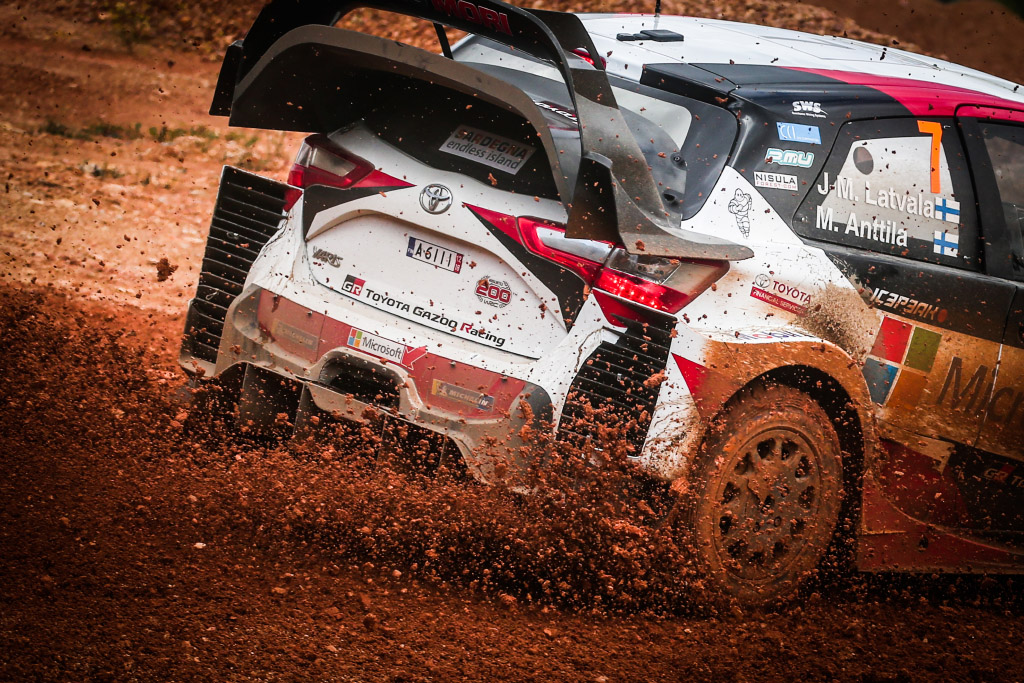 The day’s eight stages took place in unusually changeable weather, with rain showers mixed with in the sunny conditions that are more familiar in Sardinia. On the third stage of the day, Tergu – Osilo 1, Tänak claimed a stage win, maintaining his record of posting a fastest time on every rally he has contested in the Toyota Yaris WRC since he joined the team at the start of 2018. After his day came to an early end on Monte Baranta 2, the team will investigate the damage and determine whether he can restart under Rally2 rules tomorrow.

Latvala enjoyed an incident-free day and won the final test of the day as he moved up into third place, 4.4 seconds ahead of Lappi. After a puncture had caused him to be cautious during the morning loop, Lappi leapt up the leaderboard when he was second quickest in a very wet second run through the Tula test, and repeated that result on the final stage of the day.

Quotes:
Tommi Mäkinen (Team Principal)
“We don’t know exactly what happened to Ott. The team are investigating to see whether it will be possible for him to restart tomorrow. It is a very unfortunate situation because I know that Ott really wanted a good result here for his championship bid. It has been a very tricky day. We had a very good test here in Sardinia before Rally Argentina, but then it was completely dry. Today the conditions were completely different with a lot of mud and very little grip, and the setup we had this morning was not the best without the information for what would work in these conditions. Later this afternoon it was drier and both Jari-Matti and Esapekka improved their performances. They are right together on the leaderboard and it could be a good battle between them tomorrow.”

Jari-Matti Latvala (Driver car 7)
“Today has been very positive. I was too cautious on the second stage this morning but then I started to find the rhythm and the speed. In the second run through Tula the conditions were more like Wales with the rain and the mud, and it was so slippery. I lost a lot of time at the end of that stage, but after that the conditions got better, I felt like I could push more and then in the final stage of the day I had the confidence to attack and we won the stage. It’s very close with Esapekka going into tomorrow. I like tomorrow’s stages and the most important thing will be to have a clean run. Then, if we can keep the speed up as well, we will be in a good position.”

What’s next?
Saturday’s action is based the east in the Monte Acuto region, where there are three stages that will each be run twice. This includes the Monte Lerno stage, home to the famous Micky’s Jump. The two loops are separated by another visit to Ittiri – scene of Thursday night’s opening stage – following midday service in Alghero.