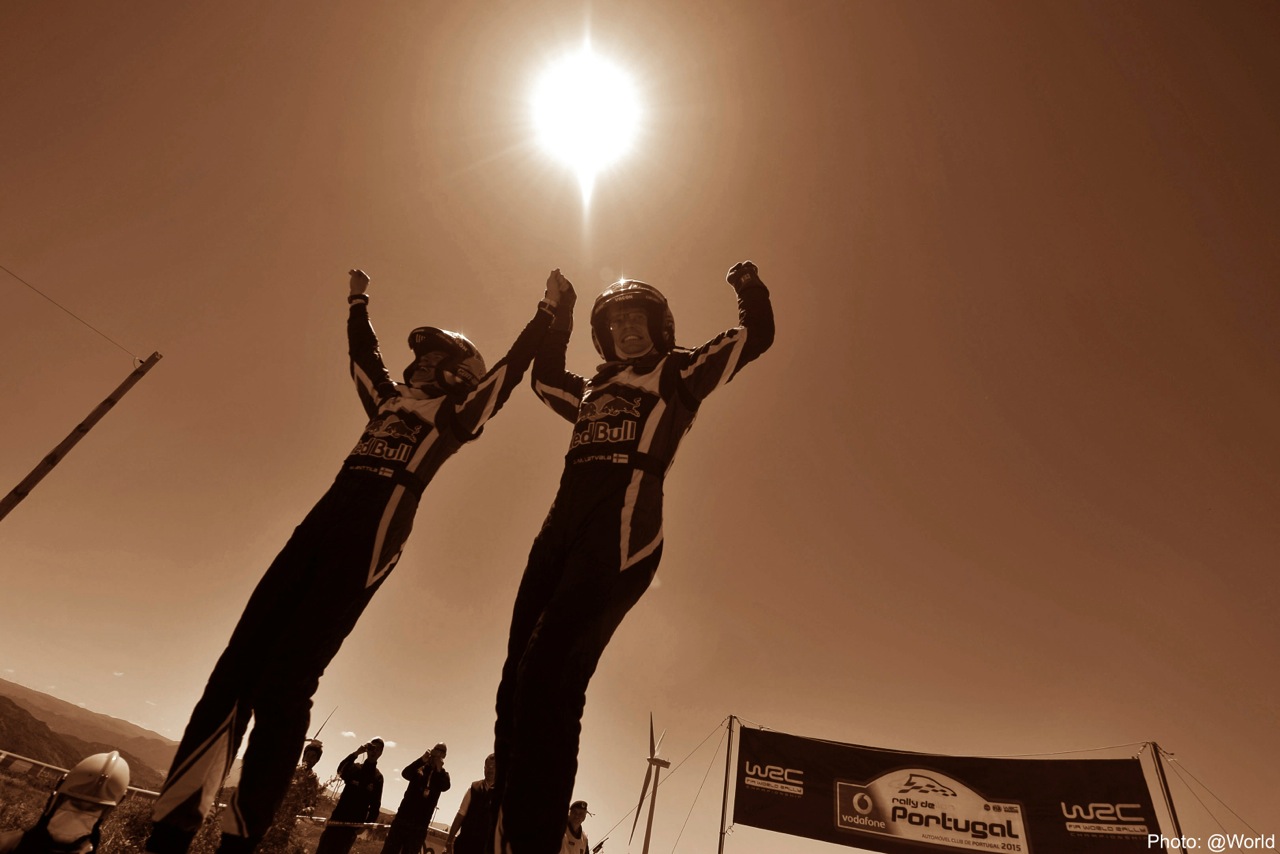 As good as it gets: Volkswagen got a triumphant one-two-three win in the FIA World Rally Championship (WRC), seeing them celebrate the most successful rally in the history of the Polo R WRC. In Portugal, at the fifth event of the season, Jari-Matti Latvala/Miikka Anttila (FIN/FIN) won ahead of their team-mates Sébastien Ogier/Julien Ingrassia (F/F) and Andreas Mikkelsen/Ola Fløene (N/N), and with the triple success on the power stage, also secured the maximum number of points in all three WRC standings for the works team from Wolfsburg. This makes Volkswagen the first manufacturer to achieve this since the introduction of the special stage for which bonus points are awarded to the top three. The total of 122 championship points for the drivers’, co-drivers’ and manufacturers’ standings were the icing on the cake of an extremely exciting Rally Portugal, in which all four manufacturers – alongside Volkswagen, the teams of Citroën, Hyundai and M-Sport-Ford – fought for the lead, and a four-way battle for the podium kept thousands upon thousands of enthusiastic fans on tenterhooks right to the end.

During the Rally Portugal, the Volkswagen brand board members Dr. Arno Antlitz (Controlling and Accounting) and Dr. Heinz-Jakob Neußer (Technical Development) paid a visit to the works team. Dr. Neußer and Dr. Antlitz are regular guests in the service parks. Dr. Antlitz was also on site at the team’s Rally Dakar win in 2011. “The one-two-three win in Portugal is a magnificent success for Volkswagen. It underlines that the drivers and co-drivers, the whole team, and the Polo R WRC were once again the measure of all things, in extremely difficult conditions for both drivers and cars,” said Dr. Neußer, who is also responsible for Volkswagen’s involvement in motorsport. “At the same time, the open contest for the win proved just how fascinating the sport on offer in the World Rally Championship is – a first-class stage for our cars. I am proud of the whole team.”

Thrilling final: only 0.065 percent made the difference

Advantage Latvala on Friday, pursuit Ogier on Saturday and Sunday: A thrilling duel for the win intensified right up to the closing special stage, the legendary classic “Fafe”, with the win going to Latvala with an advantage of 8.2 seconds. 10.4 seconds separated Jari-Matti Latvala and Sébastien Ogier going into the final special stage. Only a further 16.4 seconds placed Andreas Mikkelsen in third. In the end, only 28.6 seconds separated the top three – converted to a distance, this was 0.2 percent of the kilometres of special stages covered. And only 0.065 percent between Latvala and Ogier.

The conditions in Portugal proved difficult for drivers, co-drivers and World Rally Cars. For the first time since 2001, the Rally Portugal was held in the north of the country again, proving to be new territory for the majority of competitors. The special stages were covered in a thick layer of loose gravel, which produced more grip with every World Rally Car that covered the track. The tyre selection proved to be a challenge. The fastest option was the soft compound of the Michelin competition tyres. With the quantity of soft and hard compounds available, the trick was also to economise wisely over the four days of rallying.

A matter of honour: 172 plus one – Finland ahead of France in the nations ranking

The duel between Jari-Matti Latvala and Sébastien Ogier in Portugal was also the duel for the lead in the battle of the nations in the all-time rankings of the WRC. Going into the fifth event of the season, the two most successful countries in WRC history were level-pegging. Jari-Matti Latvala’s win saw Finland retain the upper hand. The Volkswagen drivers Latvala and Ogier are the only regular starters for their countries in the WRC elite and are fighting this prestigious battle amongst themselves with identical equipment. Ahead of the upcoming WRC events, Finland is now slightly ahead with 173 wins, France has 172 to its name.

It was also a successful rally for Portugal. With Jari-Matti Latvala, his long-term chief mechanic Jose Azevedo da Silva and his mechanic Rui Cabeda won their home rally. Also to the delight of the thousands upon thousands of fans along the rally routes and in the service park, who despite their great passion for the sport, stuck to the strict safety zones, enabling a successful Rally Portugal.

Best result of the season: eleven number ones – stage wins for Volkswagen, one special win for Ogier

Volkswagen secured eleven of the 15 possible stage best times at the Rally Portugal – and in this respect, also achieved the record of the season (73.33 percent). In light of the regulation changes to the starting order for 2015, the previous record of the season stood at 66.66 percent – achieved in Sweden and Argentina. Volkswagen have bagged a total of 392 out of 569 possible best times since January 2013 (69 percent).

Furthermore, for the 23rd time in 30 power stages, it was one of the Volkswagen duos who picked up the three bonus points for the best time – Ogier/Ingrassia. Out of 87 chances to pick up bonus points since the Rally Monte Carlo in 2013, the drivers from Wolfsburg have capitalised on this 52 times.

Latvala, Ogier and Mikkelsen finished in first, second and third to add podium finishes 49 to 51 to Volkswagen’s name. This saw the works team from Wolfsburg achieve another milestone on their 31st start in the WRC with the Polo R WRC.

Ogier ahead of Mikkelsen – Volkswagen has regained a one-two lead in the drivers’ and co-drivers’ standings. Ogier leads with 105 points, with Mikkelsen behind (63). Jari-Matti Latvala’s win sees him move up from ninth into fifth place – he now has 46 points to his name. In the manufacturers’ standings, Volkswagen is 43 points ahead of Citroën, making them as far ahead as the maximum number of points for a manufacturer per rally.

“That was a very important win! Not just for me, but for the entire team. That was the right response to the poor result in Argentina. For me personally, it was important to get back in the points after my long lean period – and to do that with a win is awesome. It was an exciting battle with Sébastien Ogier, who really put us under pressure. However, I resisted it at the crucial moment. Thank you to my team for their work and support when things were not running so smoothly lately. I am looking forward to the next rallies.”

“What a great reaction from the entire team here in Portugal after the huge disappointment in Argentina! Portugal was Volkswagen’s most successful rally since we lined up with the Polo R WRC, and a lot of people have made a valuable contribution to this outstanding triumph – particularly our drivers and co-drivers. Jari-Matti Latvala produced a strong, mature display and, like Sébastien Ogier, made the most of what he had to play with. This time Seb just missed out. Andreas Mikkelsen also put in a very fine performance on his debut with the second-generation Polo R WRC. I take my hat off to all three. They once again had a dream team behind them, who did a flawless job. Every one of them did their utmost to banish the memory of Argentina. I am incredibly proud of our team.”