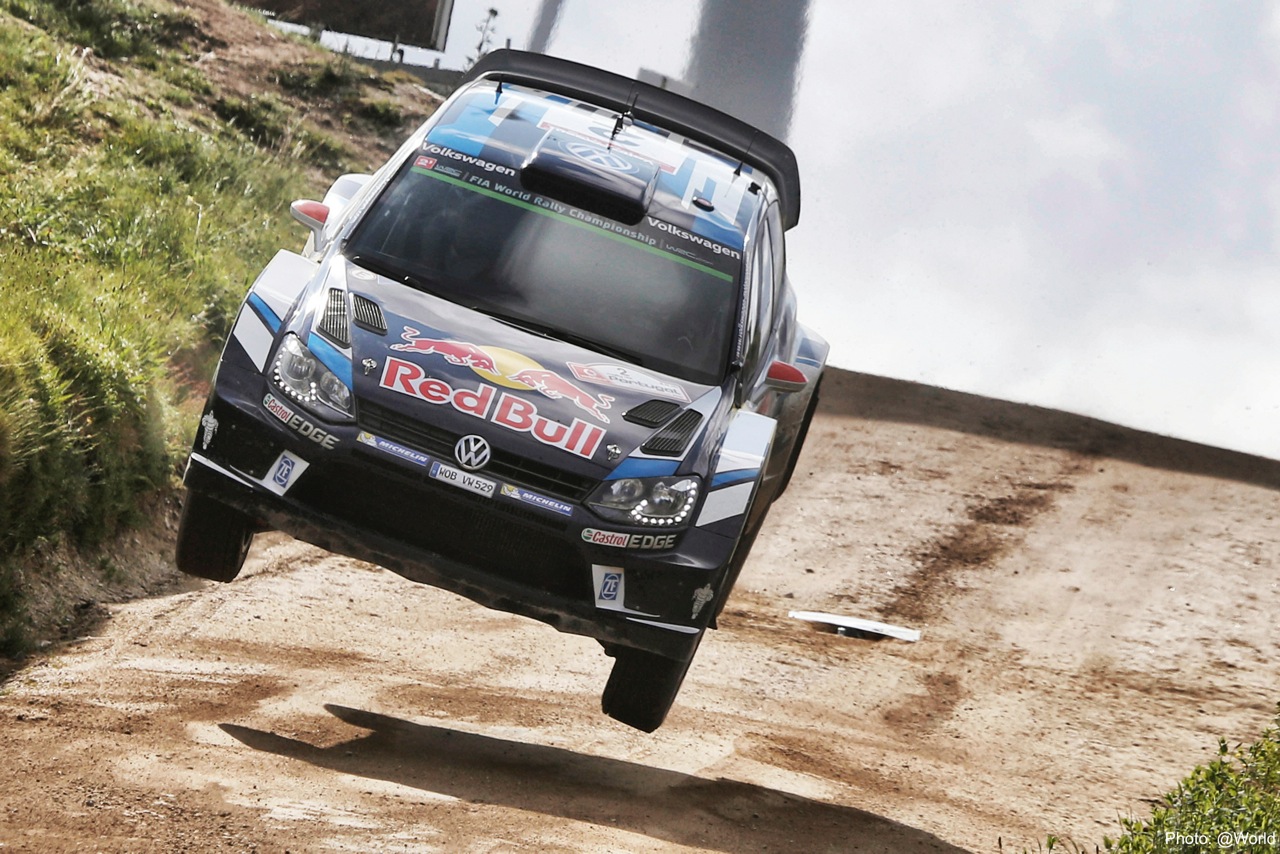 Excitement right down to the wire, Mikkelsen beats Ogier, lucrative points haul – Volkswagen took an important step towards the defence of its titles at the Rally Portugal. Andreas Mikkelsen/Anders Jæger (N/N) finished runners-up for the works team from Wolfsburg, ahead of Sébastien Ogier/Julien Ingrassia (F/F) in third. In doing so, they claimed podium finishes number 75 and 76 in the Polo R WRC’s 44th rally. This result sees Mikkelsen/Jæger climb into second place in the Drivers’ and Co-Drivers’ Championship, while Ogier/Ingrassia once again extended their lead at the top of the standings. Jari-Matti Latvala/Miikka Anttila (FIN/FIN) finished sixth in the third Polo R WRC to help Volkswagen extend its lead in the Manufacturers’ Championship. Victory at the Rally Portugal went to Kris Meeke/Paul Nagle (GB/IRL, Citroën).

“The Volkswagen team once again produced a very impressive performance, and the battle between Andreas Mikkelsen and Sébastien Ogier was very exciting,” said Dr. Herbert Diess, Chairman of the Board of Management of the Volkswagen Passenger Cars brand, who was visiting the Rally Portugal. “As championship leader, it is okay to be disadvantaged to a certain degree. However, it is hard to accept that you have absolutely no chance of winning, just because you are leading the championship. As such, two podiums are a very, very good result – particularly with regard to the title defence in the World Rally Championship. It was impressive to see how professionally and harmoniously the entire team worked together.”

Roughly 100,000 fans on the iconic Fafe stage, and thousands more along the entire rally route – the Rally Portugal was once again enough to give anyone goosebumps. The three Volkswagen duos were spurred into outstanding performances by the Portuguese crowds, who are always both passionate and fair. Volkswagen reached another milestone at the Rally Portugal: on the 803rd special stage since 2013 with the Polo R WRC, the three Volkswagen duos finished first, second and third for the 102nd time. This also marked the 562nd stage win for the Wolfsburg-based car maker – that is 70 per cent of all the stages the successful World Rally Car has contested. Volkswagen won every stage from Saturday lunchtime onwards in Portugal.

Despite suffering a set-back, Jari-Matti Latvala and Miikka Anttila produced a fighting display for the Volkswagen team and played a major role in helping extend the lead in the Manufacturers’ Championship. The Finnish duo hit a hole in the road on Friday’s extremely demanding fifth stage, “Ponte de Lima”, resulting in a loss of power steering and a direct time loss of 45.6 seconds. What followed was a true feat of strength, which allowed Latvala/Anttila to end the day in the top ten. The pair fought their way back to sixth place overall on Saturday. Volkswagen, with the team consisting of Ogier/Ingrassia and Latvala/Anttila, extended its lead over Hyundai in the Manufacturers’ Championship by 13 points to 49.

The first WRC event on European gravel proved to be a test for man and machine in equal measures – and the Rally Portugal lived up to its reputation as being particularly tough on the cars. With a loose layer of gravel covering the stages on the first loop, and sharp stones on the second, the drivers really had to be on the ball at all times – and they once again proved to be up to the task.

A one-two-three on the Power Stage – Volkswagen picked up a full haul of bonus points towards the Drivers’ and Co-Drivers’ World Championship at the Rally Portugal. Sébastien Ogier/Julien Ingrassia set the fastest time to score three extra points, Jari-Matti Latvala/Miikka Anttila earned two for finishing second on the Power Stage, and Andreas Mikkelsen/Anders Jæger one for the third-fastest time. This was the 35th Power Stage victory for Volkswagen with the Polo R WRC in 43 attempts, and the 74th, 75th and 76th time that one of the works duos from Wolfsburg had scored bonus points. The Volkswagen drivers have amassed 171 extra points since 2013. After five of this season’s 14 WRC rallies, Ogier/Ingrassia top the Drivers’ Championship with 114 points, 47 points clear of Mikkelsen/Jæger in second place. Latvala/Anttila have 37 points to their name.

Quotes after day three of the Rally Portugal

Jari-Matti Latvala, Volkswagen Polo R WRC #2
“Coming into the rally we obviously had completely different ambitions. However, after the way it panned out, we have to be happy with sixth place. We were able to contribute some valuable points towards the Manufacturers’ Championship, and second place on the Power Stage was also a nice way to finish. I must say a big thank you to my team and the fans out on the route, who supported us magnificently. I will certainly look forward to returning next year. Now our focus switches to the next task in hand, in Sardinia.”

“We have extended our lead in the world championship – we can be happy with that. Given their starting positions, Andreas Mikkelsen and Sébastien Ogier got the absolute maximum out of the rally, and both can be proud of what they achieved. Andreas and Anders drove the best rally of their career so far here in Portugal. Jari-Matti Latvala was unlucky on Friday, but then put in a remarkable effort for the team and scored valuable points. As such, we can look back positively on the rally. Two podium finishes is a really good result. We would like to pay a big compliment to the organisers of the Rally Portugal, and to the fans. Thousands of fans cheered us on enthusiastically – and always with a view on safety. A great example for many other rallies.”

… trial bike ace and Red Bull athlete Kenny Belaey. And a spectacular jump over all three Volkswagen driver/co-driver pairings on his special bike in the Rally Portugal service park. The Belgian is fittingly nicknamed “The Magician”, as his high-speed leap over the Volkswagen drivers – lying on the ground at the time – not only amazed hundreds of fans, but also the entire Volkswagen team. “It is absolutely fantastic what Kenny does on his bike,” said Jari-Matti Latvala. “The way he makes his way around the obstacle course is really impressive. And the jump over us drivers and co-drivers was breath-taking.” The Finn could very well mean that literally: after all, he was in potentially the most perilous position at the end of the line of bodies on the floor. Latvala did not notice that Belaey actually landed just one metre beyond him. He had his eyes firmly shut during the stunt.