By jmlatvala.com 7 years agoNo Comments
Home  /  WRC  /  Spain  /  One of a kind: Volkswagen takes on a mixture of asphalt and gravel at the Rally Spain 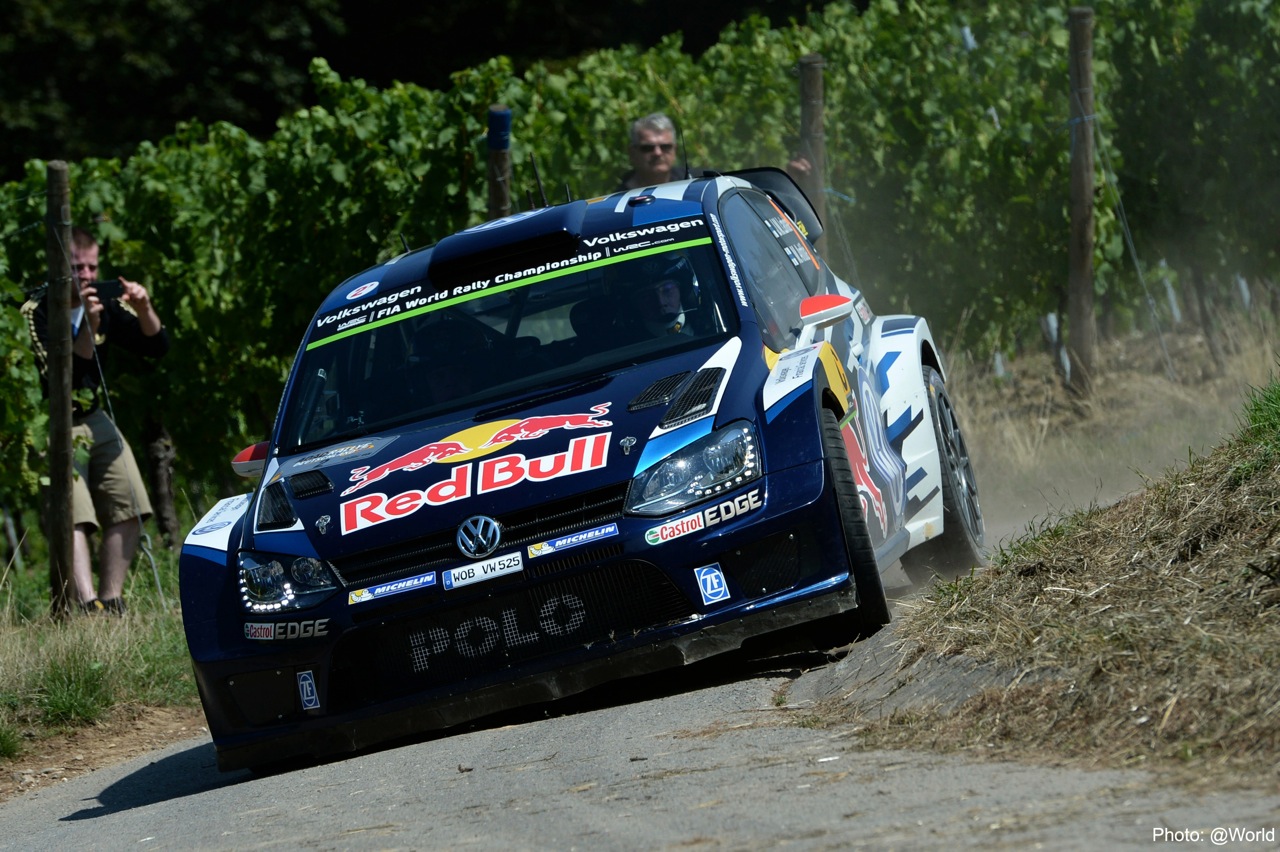 Two appearance, two wins so far for Ogier/Ingrassia and the Polo R WRC in Spain

51 per cent unfamiliar terrain at penultimate WRC round of 2015

Wolfsburg (16th October 2015). All eyes on the surface – Volkswagen faces a unique challenge when it lines up with the Polo R WRC at the Rally Spain (22–25 October). The twelfth and penultimate round of this season’s FIA World Rally Championship (WRC) is the only one on the WRC calendar, at which the drivers go up against the clock on both asphalt and gravel. Two men, in particular, have proven to be experts in this field: reigning champions and champions elect* Sébastien Ogier and Julien Ingrassia (F/F). Last year, the two Frenchmen wrapped up their second World Championship title on the Iberian Peninsula, with one round still to come. In 2013, when Volkswagen won the Manufacturers’ Championship, the winners in Spain were once again Ogier/Ingrassia. Second place in a Volkswagen one-two in both years went to Jari-Matti Latvala/Miikka Anttila (FIN/FIN), who are currently second in the World Championship and arrive in Spain on the back of their recent victory on Corsica. Success at the Rally France on Corsica saw Latvala/Anttila extend their advantage in the overall standings over the third Volkswagen duo of Andreas Mikkelsen/Ola Fløene (N/N) to 34 points. Should Latvala/Anttila retain at least 28 points of their lead on Mikkelsen/Fløene, who are third in the World Championship, they would be guaranteed to end the season as runners-up in the overall standings.

“The Rally Spain is unique. We must ensure the Polo is ideally set up for both gravel and asphalt,” said Volkswagen Motorsport Director Jost Capito. “This not only means that the driver and co-driver must be wide awake and able to adapt well to the changing conditions, but also puts the entire team to the test – particularly the mechanics. We have done a good job of switching from gravel to asphalt for the past two years, and have been successful in Spain. This year, we are obviously hoping to make it a hat-trick of wins. Jari-Matti Latvala and Miikka Anttila dominated on Corsica and travel to Spain brimming with confidence. Sébastien Ogier and Julien Ingrassia were unfortunate at their home rally – it goes without saying that they are now hungry to bounce back with what would be their eighth win of the season. Andreas Mikkelsen and Ola Fløene have not yet given up on second place in the overall standings. It will certainly be exciting.”

Asphalt, gravel, asphalt, asphalt – this sequence of road surfaces is what awaits the elite of the WRC on Thursday and the three subsequent days of rallying. And that is not the only challenge: the 51st staging of the Rally Spain features a total of 23 special stages – seven more than in 2014 – with 331.25 kilometres against the clock. The driver/co-driver crews must write new pace notes for 51 per cent of the route.

A wide range of challenges – the 2015 Rally Spain

The Rally Spain poses a wide range of challenges to the drivers and co-drivers. Like last year, the 3.2-kilometre “Barcelona” special stage will be held on Montjuïc on Thursday evening. The site of the International Exposition in 1929 and the 1992 Summer Olympics will attract spectators aplenty when the WRC elite open the Rally Spain on the narrow route in the Catalonian metropolis. In contrast, Friday is set to be a dusty affair, as the itinerary features the first of the gravel stages – all of which are covered with a fine layer of gravel, more of which will be swept off the road with every World Rally Car that passes. Typical: the “Terra Alta” special stage, with its five changes of surface and central asphalt section. At 35.68 kilometres, it is also the longest stage at the Rally Spain.

After giving the World Rally Cars a complete overhaul to switch to their asphalt set-up, the teams then face a total 199.45 kilometres against the clock on Saturday and Sunday. Parts of last year’s “Riudecanyes” stage will this time be tackled in the opposite direction on “Duesaigües”. The second running of this stage will also form the Power Stage, on which extra points towards the Drivers’ and Co-Drivers’ Championship are up for grabs. The rally has made the two roundabouts on this stage famous throughout Spain. It goes without saying that the drivers must pull off a crowd-pleasing donut on one of these. Narrow, winding downhill sections also define this famous stage. The Rally Spain demands a lot of feel for the car on the gravel sections and a good sense for the perfect line on the winding asphalt roads, some of which are reminiscent of classic racetracks.

Two wins from two appearances, the first one-two in the history of the Polo R WRC, the Manufacturer’s title with one round to go in 2013, and the Drivers’/Co-Drivers’ Championships for Sébastien Ogier and Julien Ingrassia last year – the asphalt and gravel roads of the Rally Spain have proven to be a happy stomping ground for Volkswagen. Last year, Ogier/Ingrassia and Latvala/Anttila pulled off a spectacular tenth one-two with the 318-hp four-wheel drive car from Wolfsburg. Coming into this year’s Rally Spain, the three Volkswagen crews now have a total of 16 one-twos to their name.

“The Rally Spain is one of my favourite rallies. Last year Sébastien Ogier and I had a very close battle. I pushed hard right to the finish, and won the closing Power Stage. Unfortunately I missed out on victory by just over eleven seconds. I was not 100 per cent in gravel mode at the start of the rally. I had focussed more on the asphalt set-up, so won most of my special stages on the final day of the rally. However, you must also be set up for gravel on the opening day in Spain if you want to be right up there. I have learned from that: I now know how I need to set up the Polo and that I have to drive cleanly on these sections. The surface on the gravel stages is relatively hard, but it is covered by a fine, loose layer. Victory on Corsica has definitely given me plenty of confidence. There are just two rallies remaining this year – and I want to be in contention to win them both.”

… Carlos Sainz won his home rally twice? “El Matador” won in 1992 and 1995. At his side: Luís Moya, now a member of the Volkswagen Motorsport team.

… Sebastián Salvadó won the inaugural Rally Spain? The Spaniard was victorious at the wheel of an Alfa Romeo in 1957.

… the first time the Rally Spain was not won by a Spaniard was in 1983? The Italian pair of Adertico Vudafieri and Tiziano Siviero won in a Lancia Rally 037.

… the Rally Spain is being held for the 51st time this year, and the 23rd time as a round of the World Rally Championship? The event, which is run by the Reial Automòbil Club de Catalunya (RACC) first featured on the WRC calendar in 1991. Only once – in 1994 – did the Rally Spain only count towards the 2-Litre World Rally Cup.

… the Rally Spain was held on the Costa Brava between 1991 and 2004? Back then, the rally headquarters were in the party stronghold of Lloret de Mar. However, there has also been plenty on offer in the way of leisure activities since 2005: the headquarters, media centre and service park are housed in the grounds of the PortAventura Resort.

… France is the most successful nation at the Rally Spain? Since the rally first appeared on the WRC calendar, it has been won by a Frenchman on 16 occasions. Sébastien Loeb alone won eight times between 2005 and 2012. Volkswagen driver Sébastien Ogier contributed two victories to the French total in 2013 and 2014.

… the body shell of the Polo R WRC is made in Pamplona? Last year, 150 employees from the Volkswagen factory in Pamplona made the 400-kilometre journey to watch their three Polo R WRCs in action, courtesy of an invite from Volkswagen Spain.

The mechanics could produce a record-breaking performance at the Rally Spain. During the 75-minute service on Friday evening – the longest of the season – they will convert the Polo R WRC from its gravel configuration to the asphalt set-up. For an idea of the sheer effort required, look no further than the number of individual components that must be replaced. Per car, the mechanics must swap 13 modules, consisting of 1,348 individual parts – that is a total of 4,044 parts for all three Polo R WRC.