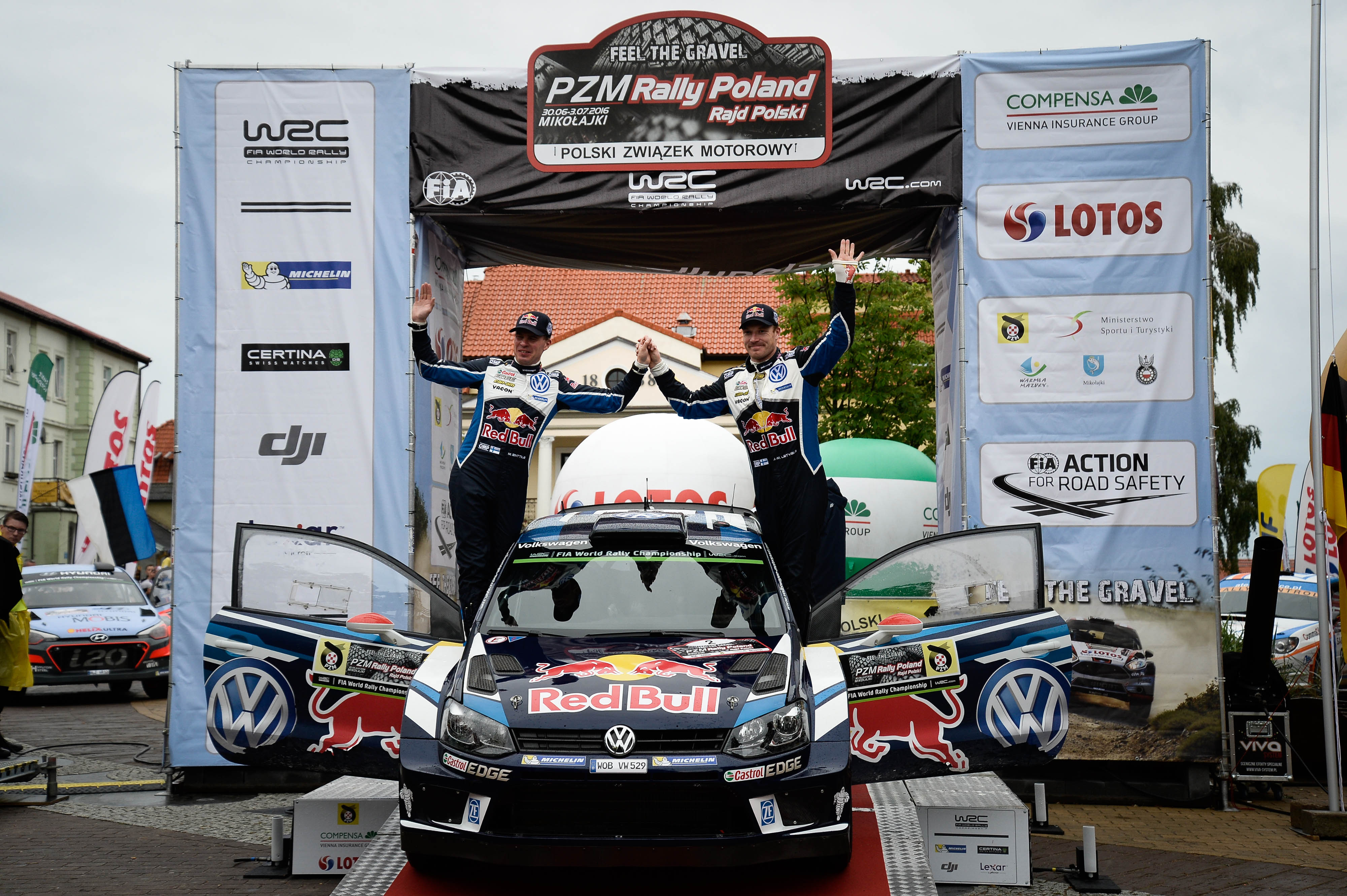 Thrilling right down to the wire, with fortune favouring the brave: Andreas Mikkelsen/Anders Jæger (N/N) produced an outstanding display in Poland to take their second victory in the FIA World Rally Championship (WRC). The duo in the Volkswagen Polo R WRC finished just ahead of runners-up Ott Tänak/Raigo Mõlder (EST/EST, M-Sport-Ford) in an exciting finale, in which they benefitted from Tänak’s last-minute misfortune, as the long-time leader lost time due to a puncture. Victory sees Mikkelsen/Jæger close the gap to fellow Volkswagen pair Sébastien Ogier/Julien Ingrassia (F/F), who finished sixth, in the race for the world championship. As the season reaches the halfway point after seven of 14 rounds, Ogier/Ingrassia and Volkswagen head to the coming rally in Finland (28.–31.07.2016) on top of the overall standings. Mikkelsen/Jæger are second, 51 points behind the three-time world champions. Volkswagen maintained a lead of 61 points over its closest rival Hyundai in Poland. Jari-Matti Latvala/Miikka Anttila (FIN/FIN) ended the Rally Poland in fifth place in the third Polo R WRC.

51 points lead – Sébastien Ogier/Julien Ingrassia lead the World Rally Championship going into the second half of the season. Their closest rivals are team-mates Andreas Mikkelsen/Anders Jæger, whose victory at the Rally Poland saw them climb into second place in the Driver and Co-Driver competitions. Jari-Matti Latvala and Miikka Anttila have moved up into fourth place, 75 points behind the leaders. Volkswagen has opened a nice gap in the Manufacturers’ Championship: at the end of the first half of the season, the Wolfsburg-based car maker leads Hyundai by 61 points. 25 points are awarded for a win.

Fist searing heat, then torrential rain – these were the two faces of the 2016 Rally Poland. With high temperatures, dust and loose gravel, the two opening days – Friday and Saturday – were a huge challenge, particularly for the first crews onto the route. In contrast, the competitors were greeted with a soggy route on Sunday morning, after overnight rain completely changed the character of the Rally Poland. In both cases, accurate pace notes were the key to success.

Speed, speed and more speed – part one of the high-speed festival

The Rally Poland is one of the fastest rallies on the FIA World Rally Championship (WRC) calendar and formed the start of the high-speed phase of the series, which continues with the Rally Finland (28.–31.07.2016). In 2016, the average speed was 106.16 kilometres per hour. And that despite the traditionally slow spectator stages and raining stages on Sunday significantly lowering the average speed of the rally.

The 37th Power Stage win for Volkswagen, and the 31st for Sébastien Ogier: the closing stage of the Rally Poland was once again a huge success for the car maker from Wolfsburg. Thanks to the stage win for Ogier/Ingrassia and second place for Latvala/Anttila, Volkswagen has now picked up extra points on 83 occasions – and that in only the 45th Power Stage since the manufacturer joined the World Rally Championship at the 2013 Rally Monte Carlo.

Jari-Matti Latvala, Volkswagen Polo R WRC #2
“First of all, congratulations to my team-mate Andreas Mikkelsen. He drove a fantastic rally. It is obviously bitter for Ott Tänak to lose first place with so little of the rally remaining, but that is the ruthless nature of our sport. For me, today was the best day of the Rally Poland. Unfortunately, I found my rhythm far too late. Despite this, the good times on the special stages and second place on the Power Stage are a decent way to finish the rally and earned some valuable points in the Manufacturers’ Championship. Next up is the Rally Finland – my home race and the highlight of the year. I am really looking forward to it and will prepare as well as possibly for it.”

“Andreas Mikkelsen and Anders Jæger can be proud of their performance. They fought courageously, never gave up, and deserved to win. The late set-back is obviously a great shame for Ott Tänak and Raigo Mõlder. They would also have fully deserved to win. We have great respect for their effort – I am sure that their time will come in the World Rally Championship. Sébastien Ogier and Julien Ingrassia also performed brilliantly, although this was not reflected in the result due to the expected time loss they suffered as the first car on the road. They were far better than their result suggests. Jari-Matti Latvala and Miikka Anttila battled back after a disappointing start to the rally. All in all, we are happy with the performance of the entire team. The whole troop worked flawlessly and fought for every millimetre.”