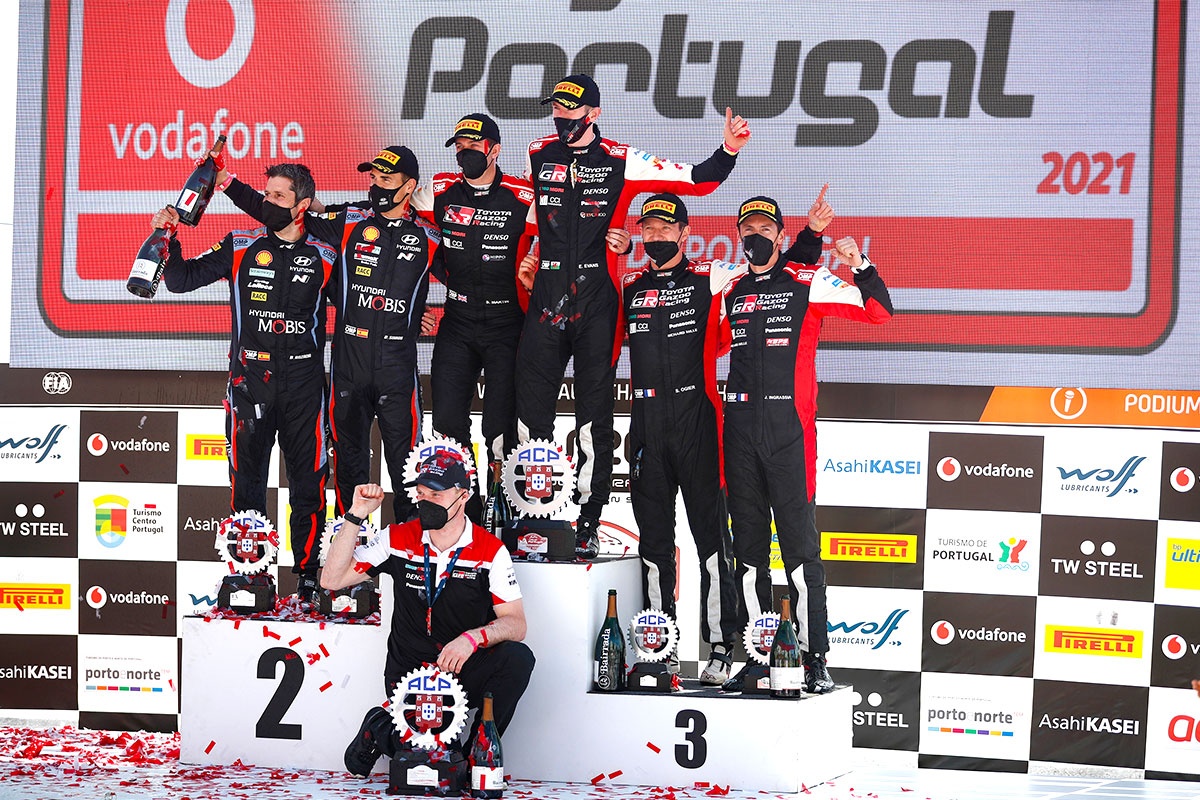 The TOYOTA GAZOO Racing World Rally Team is celebrating its third win and double podium finish from four events so far in 2021 after Elfyn Evans claimed victory at the Rally de Portugal. Sébastien Ogier finished third and continues to lead the drivers’ championship – two points in front of Evans – while the team has extended its lead in the manufacturers’ standings.

Along with co-driver Scott Martin, Evans drove a consistent and intelligent rally and was rewarded with the lead on Saturday afternoon. His advantage coming into the final day’s five stages was a narrow 10.7 seconds, but he stormed through the opening test 8.9s quicker than anyone else to almost double his margin. He claimed two further stage wins later during the morning – bringing his tally for the weekend to six – and ultimately sealed victory by 28.3s. It’s the fourth win of his WRC career, and his third since joining Toyota at the start of 2020.

Ogier and co-driver Julien Ingrassia recovered well from the disadvantage of running first on the road on Friday and sweeping the loose gravel stages. Securing third overall, he saved his tyres for the rally-ending Power Stage to try and secure as many points as possible. He set the third-best time, giving him three bonus points and his two-point advantage in the standings over Evans, who was fifth-fastest in the same test as he sealed the overall win.

Finishing a superb fourth place after a fast and consistent weekend, Takamoto Katsuta claimed the best result of his career to-date, driving a Yaris WRC as part of the TOYOTA GAZOO Racing WRC Challenge Program.

After retiring due to technical reasons on Saturday afternoon, Kalle Rovanperä restarted this morning, taking the opportunity to gain further knowledge and also setting the fourth-best time in the Power Stage.

Quote:
Jari-Matti Latvala (Team Principal)
“We are very, very happy with this result. At the beginning of the rally it wasn’t looking like we would finish on the highest step of the podium. But in rallying you have to complete every corner until the end of the very last stage, and in the end we won the rally, which is always a fantastic feeling. Elfyn has been the most consistent driver over the weekend and the performance has been at a high level as well. And generally the team has been doing really good work over the weekend with a lot of positive things to take away: Seb scoring the third place, bringing great points for the championship, and also Takamoto taking his best ever result in fourth. Unfortunately it was a more disappointing rally for Kalle, but I’m sure he will be very motivated to come back strongly.”

What’s next?
Rally Italia Sardegna (June 3-6) features fast and narrow stages coated with fine and sandy gravel, which is swept away by each passing car to leave rockier and rutted roads. Exposed rocks, as well as trees at the side of the road, can catch out the unwary. Temperatures can often be high, increasing the stress on the cars and the tyres.