By jmlatvala.com 5 years agoNo Comments
Home  /  WRC  /  Australia  /  Rally Australia – Volkswagen trio on course for the podium in Australia, Ogier at the front 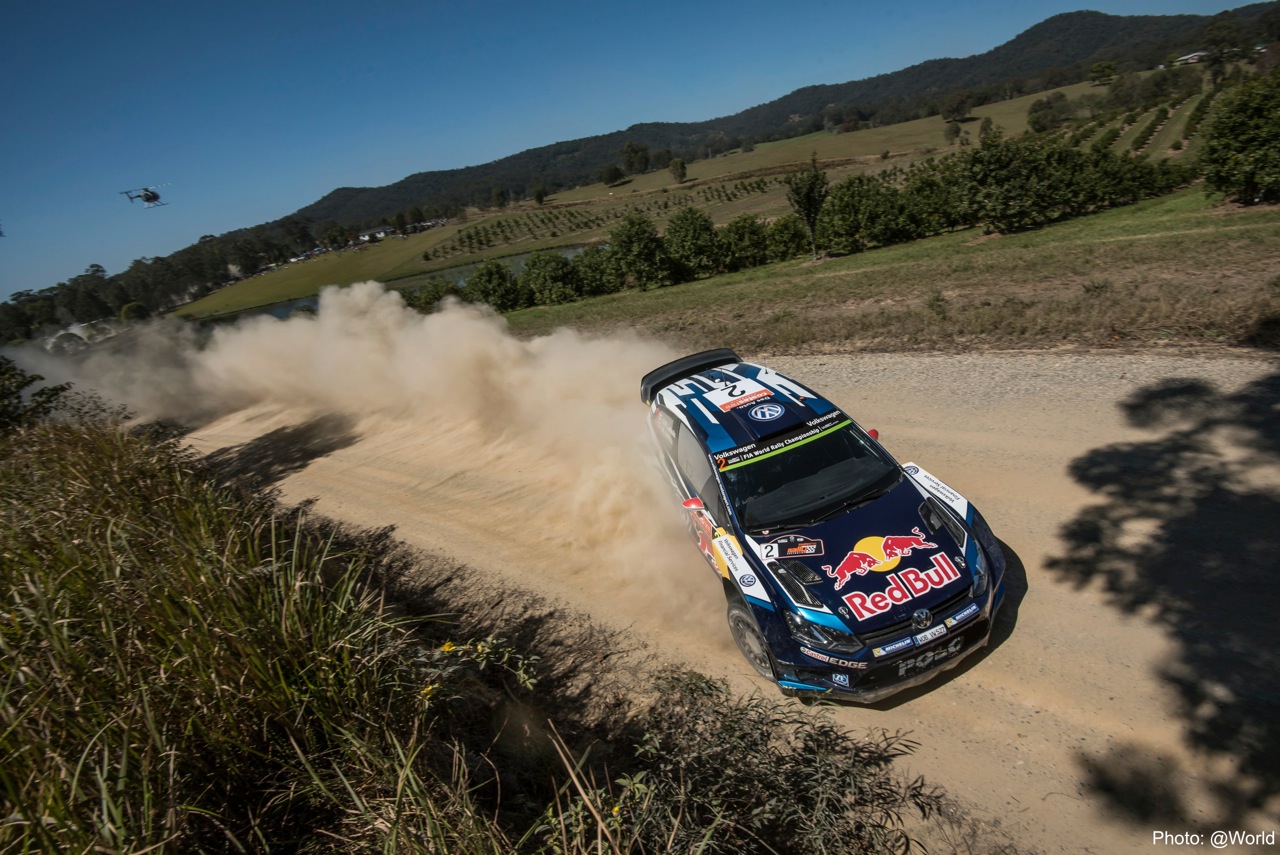 Lead seized on the night stage: Sébastien Ogier is at the top Down Under

Wolfsburg (12 September 2015). The FIA World Rally Championship (WRC) has a thrilling final day in store at the Rally Australia. Four driver/co-driver duos are in with a realistic chance of getting the win on the final five special stages covering 68.76 kilometres against the clock on Sunday – including all three Volkswagen pairings. After 242.60 of 311.36 kilometres of special stages, the new leaders Sébastien Ogier/Julien Ingrassia (F/F) in the Polo R WRC are just three tenths of a second ahead of Kris Meeke/Paul Nagle (GB/IRL, Citroën) and a further 2.3 seconds ahead of their Volkswagen team-mates Jari-Matti Latvala/Miikka Anttila (FIN/FIN). Andreas Mikkelsen/Ola Fløene (N/N) in the third World Rally Car from Wolfsburg are in fourth position – trailing the leaders by just 9.1 seconds.

The first two days of the Rally Australia, the tenth event of the WRC season, have already been something of a thriller. On vast gravel tracks through open country that are fast in places, and on the narrow, winding passages through eucalyptus forests, the podium positions changed hands 14 times on the first twelve special stages alone. Sébastien Ogier’s narrow lead of just three tenths of a second – seized on the closing night stage on Saturday – gives him a lead of 8.61 metres, which is two lengths of his car. This is equal to 0.004 percent of the total distance covered so far.

“The gaps between the top four drivers are minimal after two days, meaning that everything comes down to Sunday. We have definitely given ourselves a good starting position to fight for the win at the Rally Australia tomorrow. After we even had the lead yesterday, today didn’t go quite the way we would have liked. I couldn’t find my rhythm on the long ‘Nambucca’ special stages. I had hoped for more there. However, we can be satisfied overall, tomorrow will be a real thriller. And I’m not here to finish second.”

“There’s one thing that no one can accuse our drivers of: not showing enough commitment. They gave everything today to make up for the disadvantage of being the first cars on the track, right from the very first metre, down to the end. That’s a fantastic sporting performance. Courage and passion saw them work their way into a great starting position to still be fighting for the win on the closing day of rallying on Sunday. It will be exciting down to the wire. Our goal is to secure all three titles here already – and as it stands, that is possible tomorrow. But more of the same is required on Sunday: Everyone in the team needs to deliver another flawless job so that we have something to celebrate at the end of the day.”

… a Red Bull cap. It slipped under the pedal in Andreas Mikkelsen’s Polo R WRC on the second pass of the monster stage “Nambucca”, and the Norwegian had to kick it out of the way at full rally speed. But that was only the second part of the story. Part one: Mikkelsen didn’t even have the aforementioned cap on board for the morning loop. His team-mate Jari-Matti Latvala accidentally took it with him after breakfast – and was unintentionally representing Mikkelsen’s personal sponsors for a few hours.

… a small reminder. Jost Capito, Volkswagen Motorsport Director, attached a note to the motorcycle that he uses to get to the special stages. A large L with an arrow pointing left is a permanent reminder of which side of the road he needs to drive on Down Under.