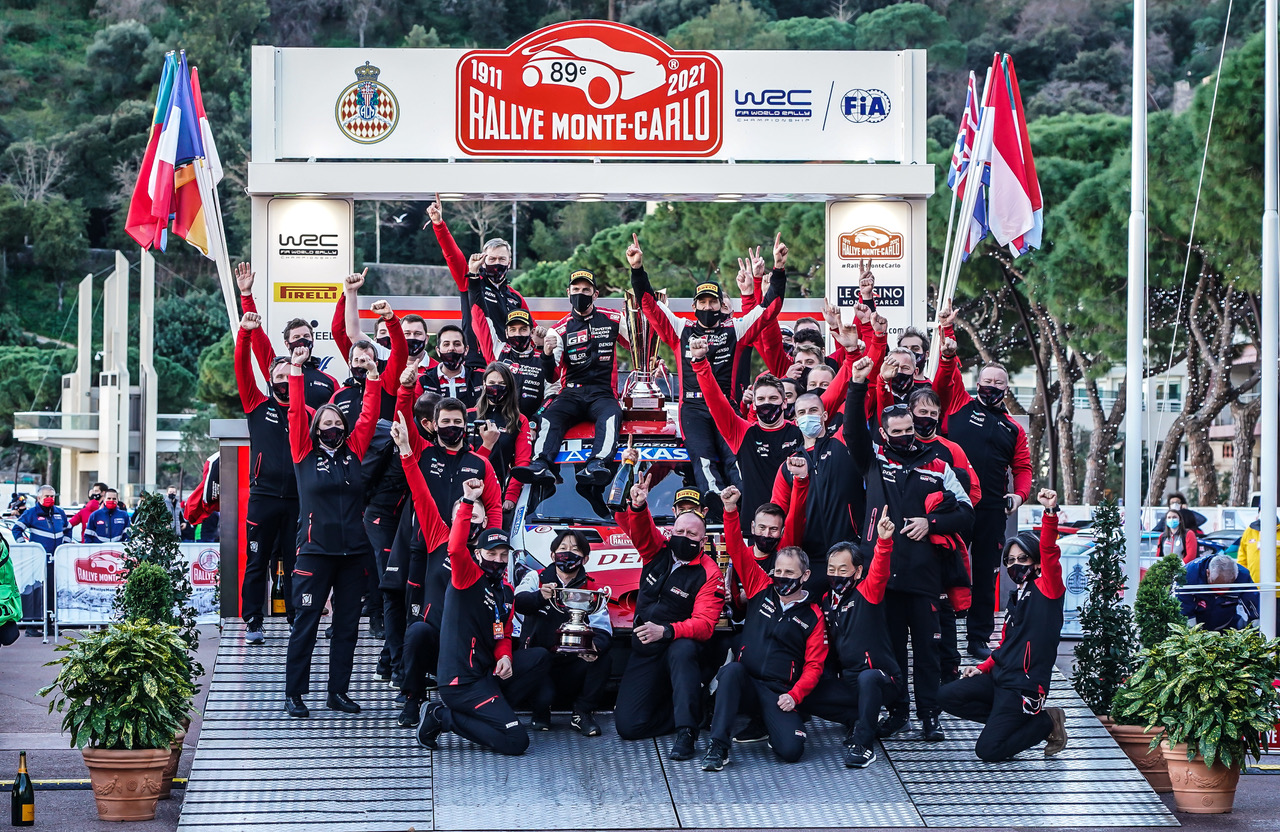 Sébastien Ogier and his co-driver Julien Ingrassia have won the legendary Rallye Monte-Carlo for a record eighth time, leading team-mates Elfyn Evans and Scott Martin in a fantastic one-two finish for the TOYOTA GAZOO Racing World Rally Team on the opening round of the 2021 season. Kalle Rovanperä and Jonne Halttunen finished fourth to complete an amazing weekend for the team.

The victory is also the 50th for Ogier and Ingrassia in the FIA World Rally Championship, becoming only the second competitors to reach the landmark.

This is the first time that the team has won the WRC’s most prestigious event with its Toyota Yaris WRC, having made the podium every year since its debut in 2017. It is the fourth Rallye Monte-Carlo win in Toyota’s history, coming on the 30th anniversary of its maiden victory in 1991.

Rallye Monte-Carlo lived up to its reputation as the most demanding event on the WRC calendar with special challenges for this year’s edition. A modified schedule to follow coronavirus restrictions in France meant that some stages took place before dawn complete with ice and snow. WRC teams also had to get to grips with tyres from the new sole supplier Pirelli on an event where tyre choice is always criticial to the outcome.

The Toyota team led the rally from its third stage early on Friday morning, with Rovanperä, Ogier and then Evans all taking turns in the lead over the course of the rally’s longest day. On his home event, Ogier claimed the lead back with a storming stage win on Saturday’s first test. He took a 13-second advantage over Evans into the final day, when he won three of the four stages – including the rally-ending Power Stage – to begin the defence of his title in the perfect way.

With second place Evans also makes a strong start to his championship campaign, while Rovanperä begins his second season at rallying’s highest level having fought for the podium on such a demanding event. Tyre damage on Sunday’s first stage contributed to Rovanperä missing out on the top three, but he did finish with the second fastest time in the Power Stage.

With Evans third quickest, the team locked out the top three positions on the Power Stage, which from this season also gives bonus points towards the manufacturers’ championship. This, combined with the one-two finish in the rally, means the team takes maximum points from the opening round – a dream start for new Team Principal Jari-Matti Latvala as he looks to build upon the work of his predecessor Tommi Mäkinen.

TOYOTA GAZOO Racing WRC Challenge Program driver Takamoto Katsuta made it four Yaris WRC drivers in the top six as he completed Rallye Monte-Carlo for the second year in a row and scored his best WRC result so far in sixth place.

Jari-Matti Latvala (Team Principal)
“I am really, really proud of the team. What a fantastic result. For my first rally in this role and immediately we have a one-two-four finish, and also Takamoto in sixth, as well the maximum points in the Power Stage – it’s incredible! I have a fantastic team and we have the best drivers. From the beginning of the rally, they had good speed and later we saw some very dominant stages from Seb which secured his victory. Elfyn did a really consistent run as well with no mistakes the whole weekend. Kalle had a chance to fight for the podium as well before he unfortunately got this tyre damage this morning that dropped him back, but fourth is still a very good start to his year. Overall it’s an amazing result to start the season with.”