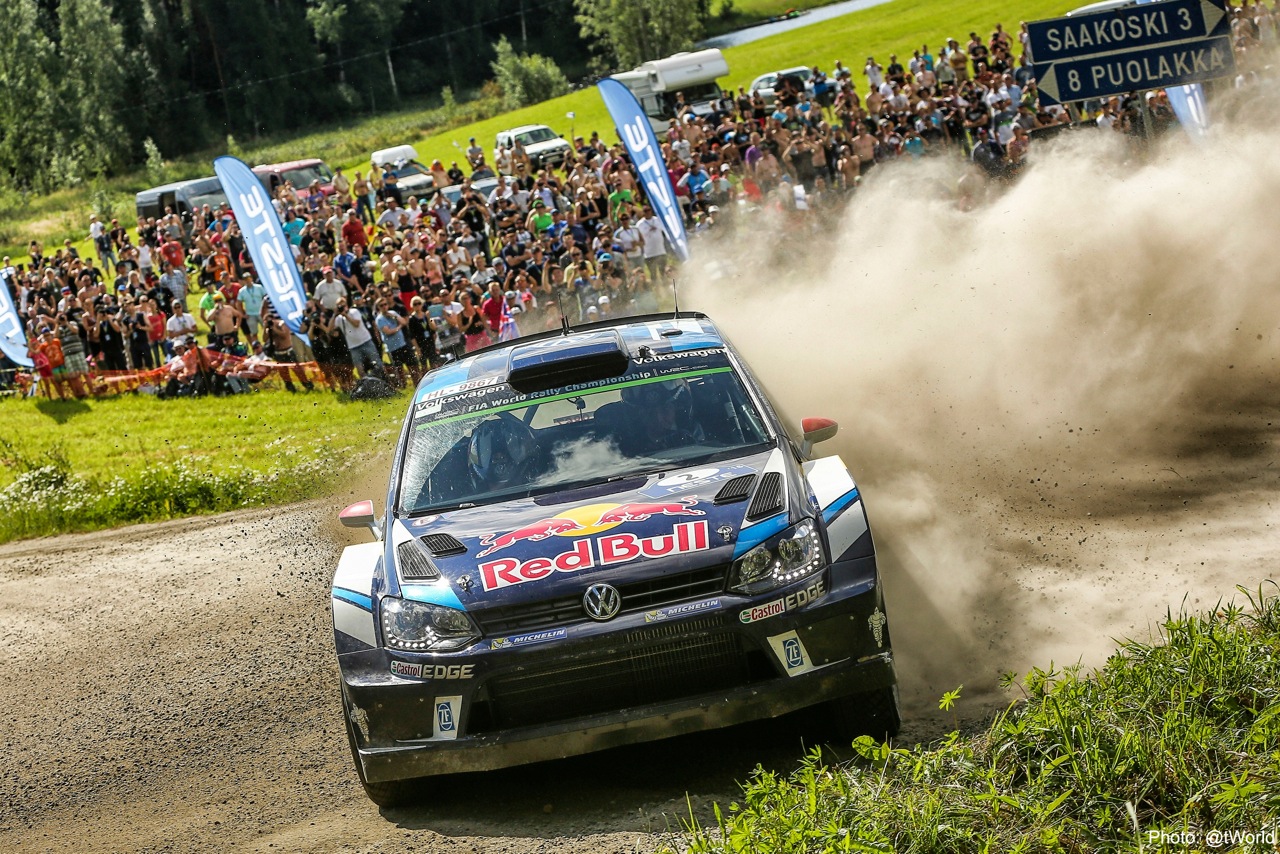 World champion empty-handed: Ogier misses out on points for first time in 2016

Well fought, well rewarded: Jari-Matti Latvala and Miikka Anttila (FIN/FIN) finished second at their home race in Finland to climb into third place in the Driver and Co-Driver competitions in the FIA World Rally Championship (WRC). Only Kris Meeke/Paul Nagle (GB/IRL, Citroën) finished ahead of the Volkswagen duo at the eighth round of the season, which featured 333.60 kilometres against the clock. This was their third podium finish in a row at the Rally Finland, having won on home soil in 2014 and 2015. Andreas Mikkelsen/Anders Jæger (N/N) finished seventh at the 66th staging of this classic rally to make up ground on three-time World Champions and current leaders Sébastien Ogier/Julien Ingrassia in the World Rally Championship. The French pair leave Finland empty-handed after coming off the road on Friday. However, they still hold a dominant lead in the World Championship with 143 points, followed by team-mates Mikkelsen/Jæger (98) and Latvala/Anttila (87).

Jari-Matti Latvala was the national hero in 2014 and 2015, when he took victory at the Rally Finland with the Polo R WRC. This time, the crowd favourite had to “settle” for the second step on the rostrum – the 80th podium finish for the Polo R WRC. Having lost valuable time with a puncture early on in the rally, Latvala fought his way back into contention before securing what was ultimately a comfortable second place. The Drivers’ Championship now makes far better viewing for the man who finished runner-up in last year’s World Championship: the 19 points in Finland – Latvala also picked up a bonus point for finishing third on the Power Stage – have propelled the Finn into third place overall. Latvala’s assault on the top of the table starts here.

The world champion gives it his all, leaves empty-handed, but is still happy

This doesn’t happen very often to Sébastien Ogier: when the 32-year-old Frenchman crosses the finish line in his Polo R WRC at the end of a WRC rally, he virtually always leaves with valuable points to his name. In Finland, he left empty-handed for only the fifth time as a Volkswagen driver when crossing the finish line. The reason: he cut a little too much off a hairpin on stage ten, “Surkee2”, and skidded into the ditch. The crew did manage to get the car back on the road, thanks to the efforts of the energetic Finnish fans, but only after losing a disastrous 16 minutes. Despite this, Ogier’s mood will be lifted by a glance at the remaining WRC rallies. The next three rounds – Germany, China and France – are asphalt rallies, at which Ogier must no longer open the route on gravel.

From podium contender to road sweeper: learning experience in Finland for Mikkelsen

Having secured victory last time out in Poland, Andreas Mikkelsen was full of confidence ahead of his outing in Finland – a rally, at which the Norwegian’s outstanding driving ability was yet to be rewarded with a top-three finish. Running third, the 27-year-old from Oslo had his sights set firmly on the podium right up to the 13th special stage – the iconic “Ouninpohja”. From that point on, he had to take over the dreaded role of road sweeper from Ogier, who had slipped down the starting order after arriving too late at a check-in after making necessary repairs on a liaison stage. Mikkelsen continued to drive well and fought hard to end the rally in seventh place – a result that sees him gain valuable ground on world championship leader Ogier.

The Rally Finland is traditionally one of the fastest rallies on the FIA World Rally Championship (WRC) calendar. Last year, Jari-Matti Latvala set a new record with the Polo R WRC, clocking an average speed of 125.44 km/h. He must now surrender this title. The new record holder: Kris Meeke with 126.61 km/h. Revenge is on the menu in 2017.

Jari-Matti Latvala, Volkswagen Polo R WRC #2
“I am happy with my performance this weekend, even though I came up just short of a hat-trick of wins at the Rally Finland. Second place and a point on the Power Stage is a very good haul. I also climbed a place in the overall standings. All in all, we could not have done any more against Kris Meeke this weekend. I would like to say another big thank you to all the many fans who supported me. It is always very special to drive here on home soil. We now move on to the asphalt season, which was remarkably good to me last year. We must now back up this weekend’s performance in Germany.”

“We are delighted with second place for Jari-Matti and Miikka. They produced another top-class performance at their home rally. They could not have done any more, and this result sees them take their place among the front-runners in the overall standings. The rally certainly did not pan out as hoped for Sébastien and Julien, but you just have to put their costly slip-up down as a small error with a big consequence – after all, even world champions are only human. Andreas Mikkelsen and Anders Jæger also produced a very strong display, which was not reflected in the result. On course for a podium finish, they were then forced to open the route, which was a major disadvantage. All in all, it was an intense Rally Finland, after which we have all three crews in the top three places in the overall standings, and continue to hold a clear lead in the Manufacturers’ Championship. As such, we are really looking forward to our home rally in Germany. Last but not least: congratulations to Kris Meeke and Paul Nagle. They produced a strong, flawless performance here in Finland and are worthy winners.”