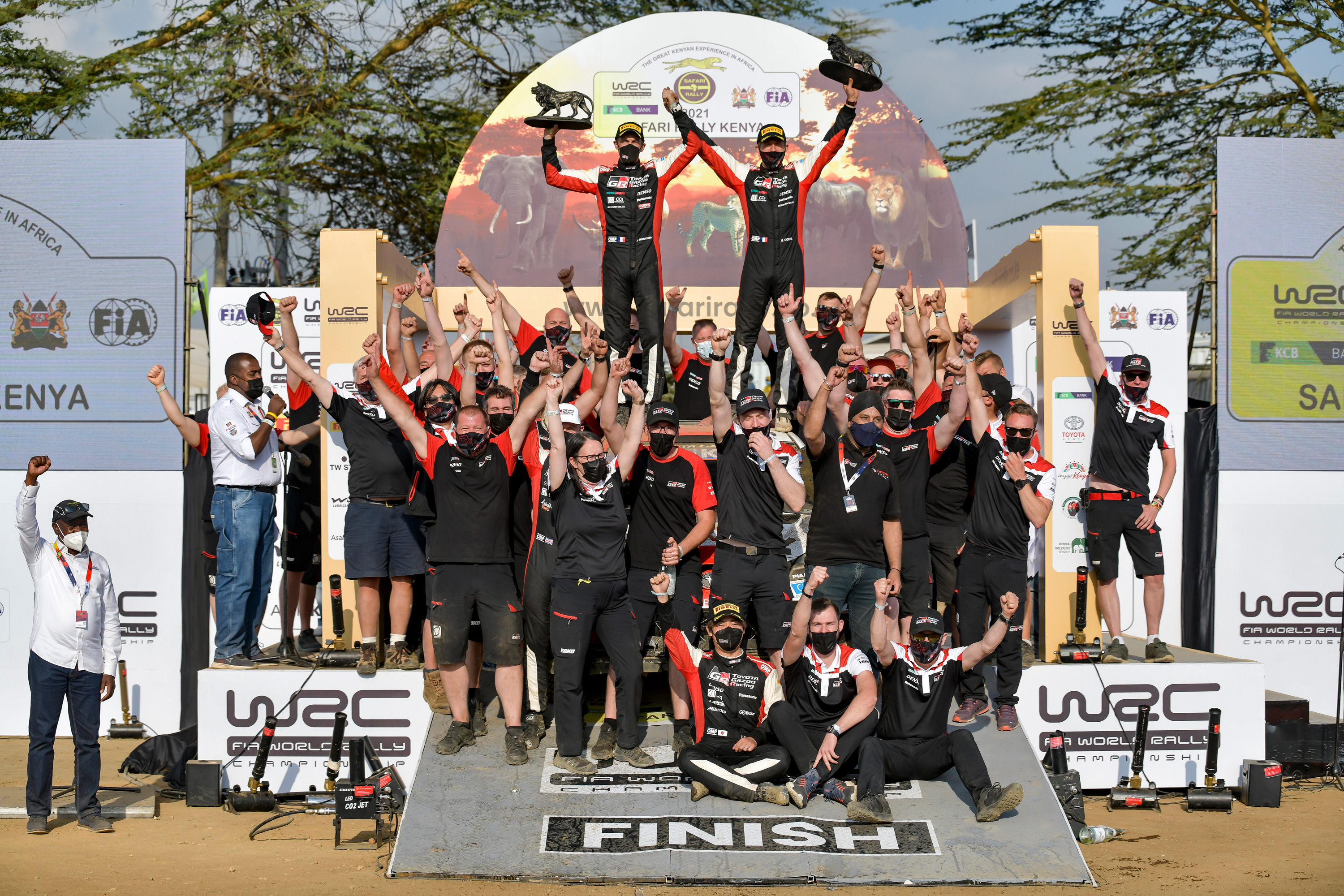 The TOYOTA GAZOO Racing World Rally Team is celebrating victory in the first Safari Rally Kenya to be held as part of the FIA World Rally Championship for nearly 20 years. Sébastien Ogier and co-driver Julien Ingrassia pulled off a superb fightback to take their fourth win from six events and extend their championship lead, while Takamoto Katsuta scored his first ever WRC podium to complete a one-two finish for the Toyota Yaris WRC.

The event lived up to its reputation as an extremely demanding rally, with many of the crews experiencing difficulties over the weekend. Ogier was seventh overall and more than two minutes off the lead after suffering an issue on Friday morning, but he charged back through the field.

He was third overall going into the final day, consisting of five short but very challenging stages. Already in the first stage of the day, trouble befell the erstwhile leader, and this promoted Katsuta into the lead of a rally for the first time, with Ogier close behind.

With just two stages to go the Toyota pair were tied on overall time, and were able to compete fully with each other for the win right until the finish. Ogier claimed his seventh stage win of the weekend to move ahead before the one-two finish – the fourth such result for Toyota this season – was secured in the rally-ending Power Stage. The victory is the ninth claimed by Toyota in the history of the Safari Rally.

Taking two additional bonus points in the Power Stage, Ogier’s championship lead is now up to 34 points ahead of team-mate Elfyn Evans, who remains second in the standings.

Katsuta’s maiden podium finish is a landmark result for the TOYOTA GAZOO Racing WRC Challenge Program, which has helped to develop the Japanese driver’s talent since 2015.

All four Toyota Yaris WRC crews finished inside the top 10. Kalle Rovanperä and co-driver Jonne Halttunen were in the battle for the lead on Friday before becoming stuck in deep ruts in the day’s final stage. They could still finish sixth overall, and took second in the Power Stage.

Evans and co-driver Scott Martin retired in Friday’s second stage but restarted on Saturday, and on Sunday they climbed back into 10th place overall as well as taking third in the Power Stage.

These points mean the team has further increased its lead in the manufacturers’ standings to 59 points at the halfway stage of the season.

Jari-Matti Latvala (Team Principal)
“This is a really special day at the end of an amazing weekend. After Friday it was looking tough for us, and now we have a one-two finish on this classic rally, the first for almost 20 years in the WRC. The victory was based on the endurance and the consistency that we showed, as well as the never give-up attitude and the commitment of the team. When Seb had his problem he stayed calm and when he saw the chance he attacked and took the victory. I am also very happy to see Takamoto on the podium for the first time. The steps he has been taking have been amazing and he really deserves this result.”

What’s next?
Rally Estonia (July 15-18) takes place over fast and smooth gravel roads with many crests and jumps, as well as some more technical sections.