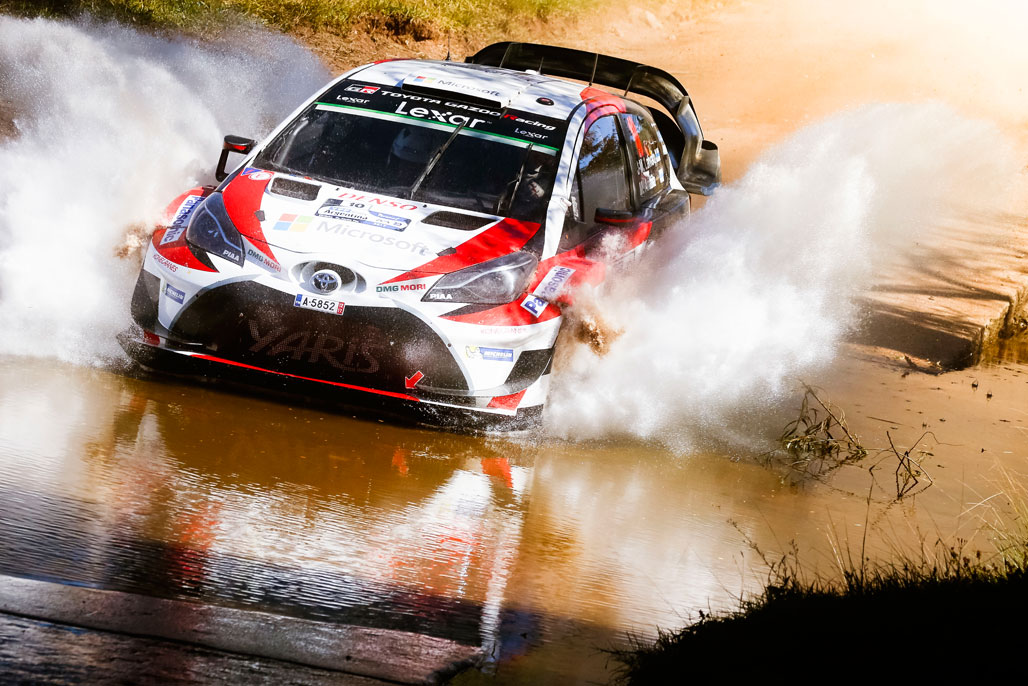 At the end of the longest day of Rally Argentina, both Jari-Matti Latvala and Juho Hänninen have improved their positions heading into the final leg of the South American event. Latvala climbs to fifth, after a day that was mostly trouble-free, yet not entirely satisfactory for the Finn. Hänninen also moved up the leaderboard, sticking to his plan perfectly, and ends the day in seventh. The challenging conditions continued, but both Yaris WRCs made it to the end.

Latvala drove rapidly yet with a degree of caution in the tough conditions. In the afternoon, his car broke a damper, giving him such a rough ride that the windscreen broke on the concrete lip of a watersplash on the final stage. The same power loss issue as yesterday unfortunately reappeared on Hänninen’s car, which the team resolved. Although the measures taken previously were clearly not a permanent solution, this proved to be a valuable learning experience. On top of that, he had some other small technical issues in the afternoon, which meant he had a slightly uncertain feeling with his car, robbing him of confidence and slowing him down. Even so, he was still able to reach the end of the day without taking risks. His car was thoroughly checked at service.

“After a very challenging day yesterday, today both cars were largely reliable as we learned from our experiences in this very demanding terrain. The roads were still incredibly rough, so this has been a really good test for our car. Considering that this is the first rally when we are running in these types of conditions, the performance is quite good, although there are still many areas where we can improve. The drivers too have done another very solid job. Jari-Matti is into the top five, while Juho has also stuck to his plan and is making solid progress. Tomorrow will be another very tricky day so our target is to bring both cars home in the points.”

“We started the day really well, although in the morning it was tricky to see because the sun was in my eyes. The second stage of the morning loop was actually where I had an accident last year, so I was maybe a little bit too careful. We’re more or less there on pace, but we’re missing just a little bit; I’m not entirely sure what it is. I seem to be losing small chunks of time to the leaders; I think maybe through being a little bit too aggressive in the corners. But still we’re going to keep the pressure on and see how it goes. The final day tomorrow is a bit shorter, but it’s still going to be one of the most challenging days of the whole rally.”

In 1980, while he was a still an active Formula 1 driver with Williams, Argentinian hero Carlos Reutemann was approached to drive in his home rally. He finished in an amazing third place overall on his debut in a Fiat 131, behind legends Walter Rohrl and Hannu Mikkola. After retiring from Formula 1, Reutemann then didn’t go rallying again until 1985, when he drove a Peugeot 205 T16 in a final one-off appearance on Rally Argentina. Again, he finished a remarkable third, before embarking on a successful political career and eventually becoming governor of the Santa Fe region.

The two most iconic stages on Rally Argentina are run tomorrow: Giulio Cesare and El Condor. These stages run through a surreal lunar landscape at high altitude. The cars leave parc ferme at 07:15 and the winner is expected on the finish ramp in Villa Carlos Paz from 14:00, after the day’s total of 55.28 competitive kilometres split over three stages. The final El Condor stage is also the Power Stage, which carries the chance to score extra championship points.