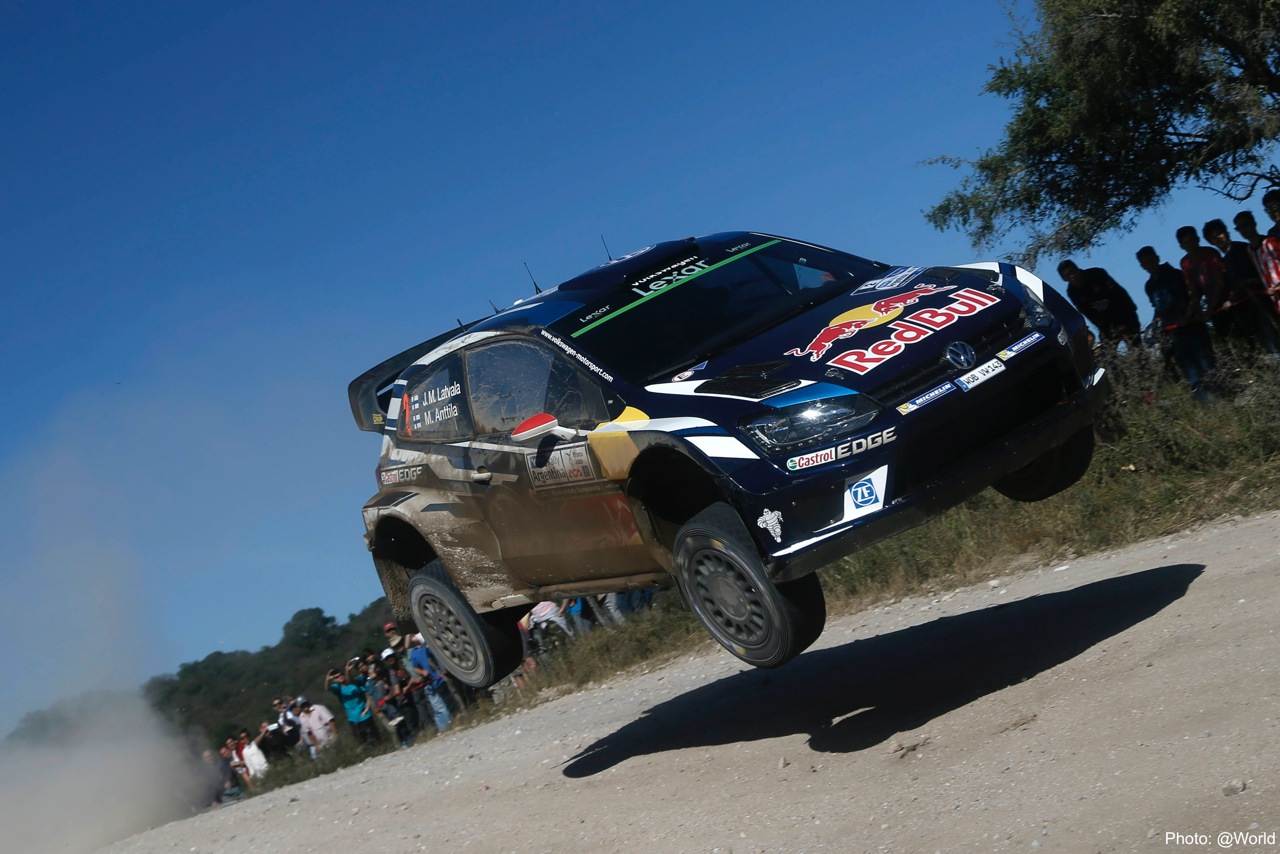 Volkswagen vs. Hyundai for the lead in the fourth event of the WRC season

Volkswagen against Hyundai, Latvala vs. Ogier and Paddon – the FIA World Rally Championship (WRC) delivered its fans in Argentina a hotly contested battle for the lead. After 152 of 365 kilometres of special stages, Jari-Matti Latvala/Miikka Anttila (FIN/FIN) in the Volkswagen Polo R WRC lead the standings – just 7.9 seconds ahead of their Volkswagen team-mates Sébastien Ogier/Julien Ingrassia (F/F), and a further 3.5 seconds ahead of Hayden Paddon/John Kennard (NZ/NZ, Hyundai). Andreas Mikkelsen/Anders Jæger (N/N) in the third World Rally Car from Wolfsburg are in fourth place after the first full day of the competition – thereby poised to pounce on a podium finish.

The first day of the Rally Argentina was characterised by the gravelly tracks of the special stages “Soconcho–Villa del Dique”, “Amboy–Santa Mónica” and “Santa Rosa–San Agustín”, on which a combination of calculated risk and careful handling of the car were called for.

Jari-Matti Latvala, Volkswagen Polo R WRC #2
“I am very pleased with the first full day here in Argentina. The main thing was to get a feel for the conditions and slowly pick up the pace. I built up a small lead stage by stage. We’ll try to continue this tomorrow. My team-mate Sébastien Ogier and Hayden Paddon in the Hyundai are really fast and it is an exciting competition. Nothing is decided yet, but like I said, I am really pleased with the first day.”

Jost Capito, Volkswagen Motorsport Director
“Friday in Argentina showed just how exciting the WRC is. A closely fought manufacturer’s battle has developed between Volkswagen and Hyundai, and Latvala, Ogier and Paddon are embroiled in a thrilling three-way driver’s battle. There’s no way of telling who is going to come out on top in the end. But we are not only in a good position with Jari-Matti and Sébastien, there’s Andreas Mikkelsen too. Like his team-mates, he has adopted a clever, forward-looking and fast pace, and is ready to pounce on a podium position. Everyone in the team will be on high alert for the rest of the rally to make sure things continue to go so well.”

… a side job for co-drivers. The co-drivers alongside Sébastien Ogier, Jari-Matti Latvala and Andreas Mikkelsen were not only tasked with reading out the pace notes with their usual precise timing at the Rally Argentina, they also had to defy the wet. In light of the many water passages, Julien Ingrassia, Miikka Anttila and Anders Jæger need to make regular additional interventions: Going into particularly deep waterways, they need to engage a switch to operate a flap that blocks the air supply to the engine, to prevent water from entering the intake passage.