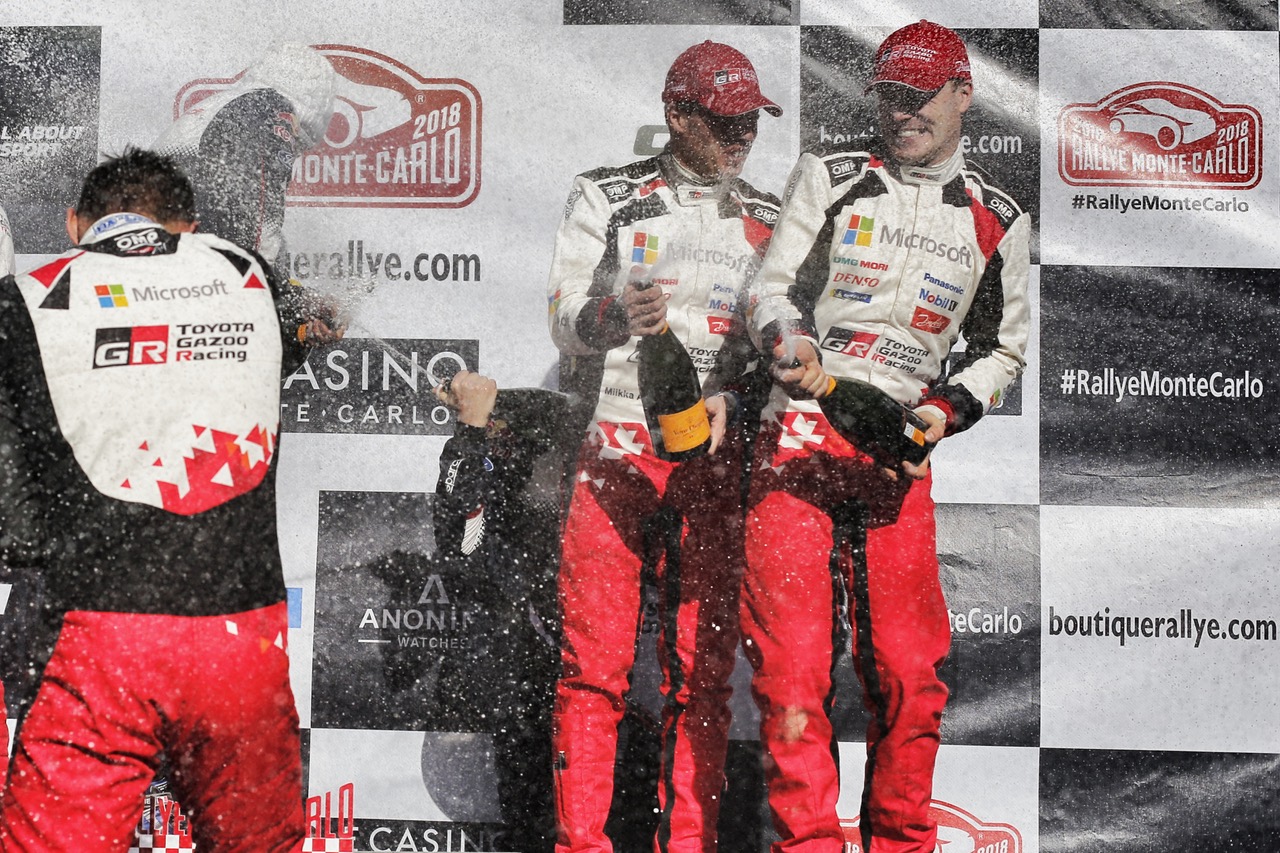 The TOYOTA GAZOO Racing World Rally Team has begun the 2018 season with a superb team performance on Rallye Monte-Carlo. Two of the Toyota Yaris WRCs finished the famous event on the podium, with Ott Tänak second and Jari-Matti Latvala third.

Tänak impressed throughout his debut rally with TOYOTA, quickly adapting to the Yaris WRC to set four fastest times as he challenged for the victory in typically demanding conditions. He took a careful approach through the four stages that made up the final day as he secured second overall: a fantastic start to his time with the team. Latvala also played it safe to complete a double podium for the squad. Esapekka Lappi ended up seventh (less than 15 seconds away from fourth) after a small mistake on the final stage, but can still look back at a strong performance in his first Rallye Monte-Carlo driving a World Rally Car.

Quotes:
Akio Toyoda (Team Chairman)
“Having developed the Yaris WRC on different roads all over the world last year, all of us at TOYOTA GAZOO Racing World Rally Team made it even better during the short off-season and put an improved Yaris on the start ramp for Rallye Monte-Carlo. Although I couldn’t be there, my heart was with the team and I saw many messages on our social networks from fans not only in Japan but all over the world. I would also like to thank Tommi and the other team members, as well as our six drivers and co-drivers who finished the rally reliably despite such challenging asphalt conditions with rain, snow, ice and mud. Toyota is a big family united by the same goal of making ever-better cars. Juho Hänninen and Kaj Lindström, who were competing in the number 11 Yaris WRC last year, continue in vital roles: Juho as part of the safety crew and Kaj as sporting director. As the new season goes on we will face even bigger challenges: extreme cold, high altitude, intense heat and increasingly stronger rivals. But together with our colleagues and fans, we are focussed on making an ever-better Yaris thanks to the valuable lessons learned from the world’s most demanding stages. Thank you for your continuing support: we appreciate it so much.”

Tommi Mäkinen (Team Principal)
“This has been a really brilliant way to start the season. I believe this is the strongest our team has been since we started. I’m very happy to see the effort put in by the whole team. I am also very impressed by the way that Ott has fitted into the team so quickly, how professional he is and how soon he has learned everything. It would be great to continue like this. We are looking forward to Sweden.”

Jari-Matti Latvala (Driver car 7)
“Rallye Monte-Carlo is never easy. We had difficult conditions once again today, particularly with the ice on the Col du Turini that came since the recce. I’m really relieved to get to the finish and to be on the podium. The team has done an excellent job and the car is performing really well so I’m excited for the season ahead. It’s going to be about staying cool and to think about the championship and about the points. This has been a good start.”

What’s next?
Round two of the FIA World Rally Championship is the only event held exclusively on snow and ice: Rally Sweden (February 15-18). This was the scene of the maiden victory for the Toyota Yaris WRC in 2017. Metal studs inserted into the tyres punch through the ice to find grip, while drivers use the snow banks to stay on the road by ‘leaning’ through the corners.