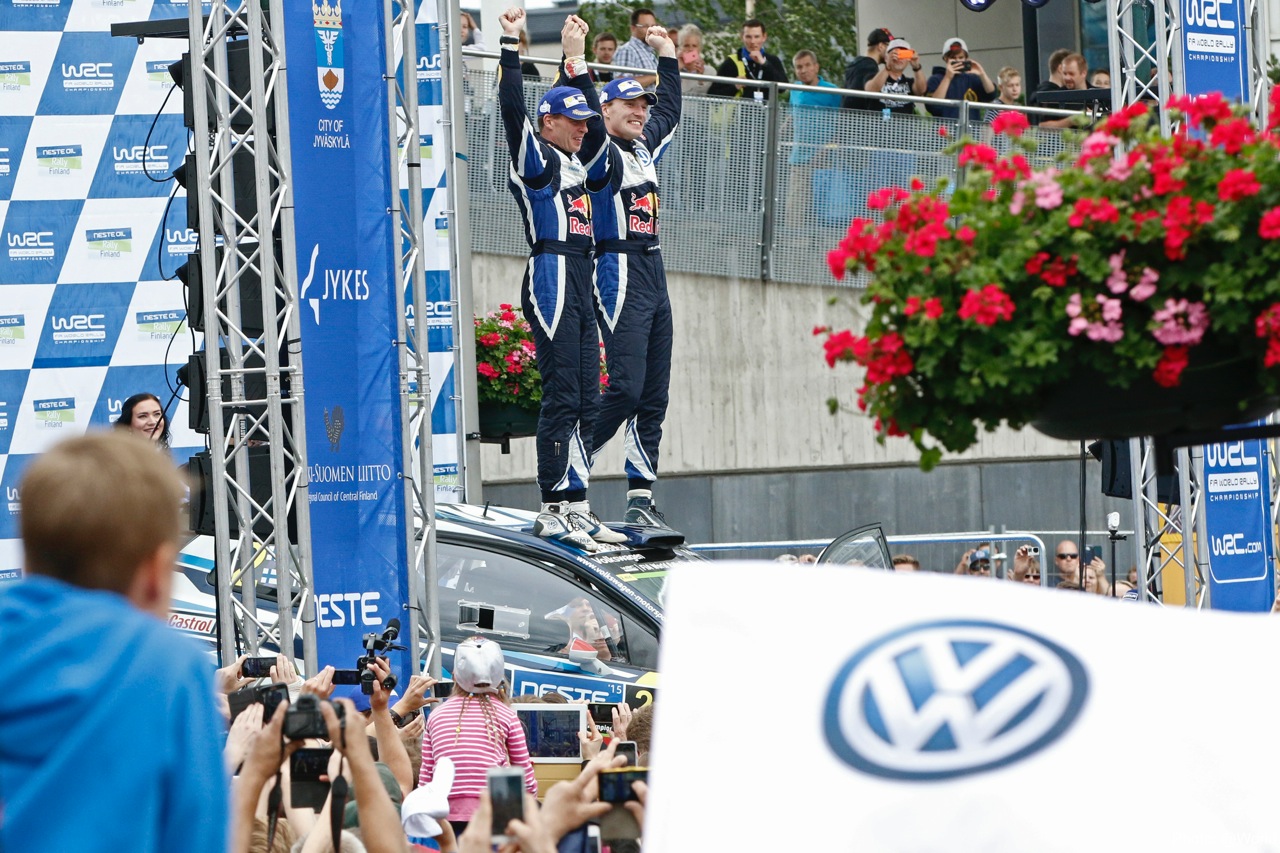 One-two sees Volkswagen extend its lead in the Manufacturers’ Championship

Wolfsburg (02 August 2015). “Kings of Speed”: Jari-Matti Latvala and his co-driver Miikka Anttila won the fastest WRC rally of all time with Volkswagen. On home soil for the Rally Finland, the eighth round of the season in the FIA World Rally Championship (WRC), the Finnish pair finished 13.7 seconds ahead of team-mates Sébastien Ogier/Julien Ingrassia (F/F), thanks to an average speed of 125.44 km/h, to climb into second place in the overall standings. Ogier/Ingrassia are also among the main beneficiaries of Volkswagen’s 13th one-two since the manufacturer joined the series with the Polo R WRC: the next round in Germany presents them with their first opportunity to secure a third World Rally Championship title in a row. In the Manufacturers’ Championship, Volkswagen – under the watchful eye of Dr. Heinz-Jakob Neußer, Volkswagen Board Member for Technical Development – extended its lead to 116 points, giving the Wolfsburg-based manufacturer a comfortable advantage going into the final five rounds in Germany, Australia, France, Spain and Great Britain.

Win number two of the season for Latvala/Anttila, their third together at the Rally Finland, was a victory for pure willpower. After a disappointing start to the 2015 season, the duo produced its strongest performance of the year, setting the fastest time on half of the 20 special stages to finish ahead of their team-mates by what is a relatively large lead for the Rally Finland. Following the 14th victory of their career, Latvala/Anttila can confidently call themselves high-speed specialists: in 2015 they won the fastest gravel rally ever in Finland, whilst victory was also theirs at the fastest asphalt rally of all time in France in 2014. The WRC round in Finland marked co-driver Miikka Anttila’s 162nd start. This saw him pass his idol Luis Moya, who is also part of the Volkswagen team and has 161 WRC starts to his name.

125.44 kilometres per hour – the highest average speed ever in the history of the World Rally Championship. This remarkable figure saw the Rally Finland smash its own previous record from 2012, when an average speed of 122.89 km/h was achieved. The Rally Finland now occupies nine places in the list of the top ten fastest rallies of all time – including the top four.

The Polo R WRC is not only “Das Auto” of the past two and a half seasons, but also “Das Auto” for high speeds. The World Rally Car from Wolfsburg has so far claimed 29 of a possible 34 victories and 56 of a possible 97 podium finishes. The 318-hp four-wheel drive powerhouse remains unbeaten at the high-speed events in Poland and Finland. The success of the Polo R WRC is not only down to excellent driving and the efforts of the engineers in the engine department, but also the guys in the chassis department. With all the long and high jumps at the Rally Finland, the driver must be perfectly in tune with all the specialist areas.

It is one of the iconic stages in the World Rally Championship: “Ouninpohja”. In the world of circuit racing, the Nürburgring-Nordschleife is regarded as the greatest test of man and machine. The rallying equivalent is this flat-out stage through the Finnish forests around Jyväskylä. Jari-Matti Latvala and Miikka Anntila took a big step towards victory on this stage in 2015. The 400th stage win of his career saw “JML” move into the lead. He also clocked the fastest speed of 132.18 km/h on the 2015 variant of this famous stage.

The fastest power stage of all time: Sébastien Ogier and Julien Ingrassia won “Myhinpää” with an average speed of 135.25 km/h to claim the 123rd, 124th and 125th bonus points for Volkswagen drivers since 2013. Jari-Matti Latvala and Miikka Anttila added a further two points, taking Volkswagen’s tally to 127 points – more than any other manufacturer. This was the 23rd power stage success for Ogier/Ingrassia, and the 26th for the Volkswagen team.

As well as Latvala/Anttila, the big winners at the Rally Finland were World Championship leaders Sébastien Ogier and Julien Ingrassia. The double world champions now hold an 89-point lead going into Volkswagen’s home event in Germany, giving them their first ‘match point’ in Trier. Only eight driver/co-driver pairs could still mathematically prevent them from winning a third title. The best-placed of these are the new second-place duo in the World Championship, Jari-Matti Latvala/Miikka Anttila, third-placed Mads Østberg/Jonas Andersson (N/S, Citroën, 98 points back), fourth-placed Andreas Mikkelsen/Ola Fløene (99 points back) and fifth-placed Thierry Neuville/Nicolas Gilsoul (B/B, Hyundai, 112 points back).

“I cannot express how happy I am! My motivation coming into this rally and my desire to win were immense. After all the ups and downs I’ve been through this season, this victory means a huge amount. I would like to thank the entire team for its great work. They have always believed in me, even in times when things have not run so smoothly. As expected, today was a real rollercoaster and a perfect finale to the 2015 Rally Finland. Thank you very much to the fans for the support in the service park and along the route. I just want to enjoy the moment now!”

“What a fantastic rally from Jari-Matti Latvala, Miikka Anttila, Sébastien Ogier and Julien Ingrassia. They were in a class of their own. Jari-Matti and Miikka are without any doubt the ‘Kings of Speed’, as nobody has ever been as fast as them on either asphalt or gravel. Sébastien Ogier and Julien Ingrassia have their first opportunity to wrap up the World Championship at the coming round in Germany. Anyone who knows them will also know that they do not like finishing second, and will be doing everything in their power to finish on top again in Germany. Although Andreas Mikkelsen and Ola Fløene had to retire following their crash on Friday, we are still extremely happy. We remain undefeated in Finland – the fastest rally on the calendar.”