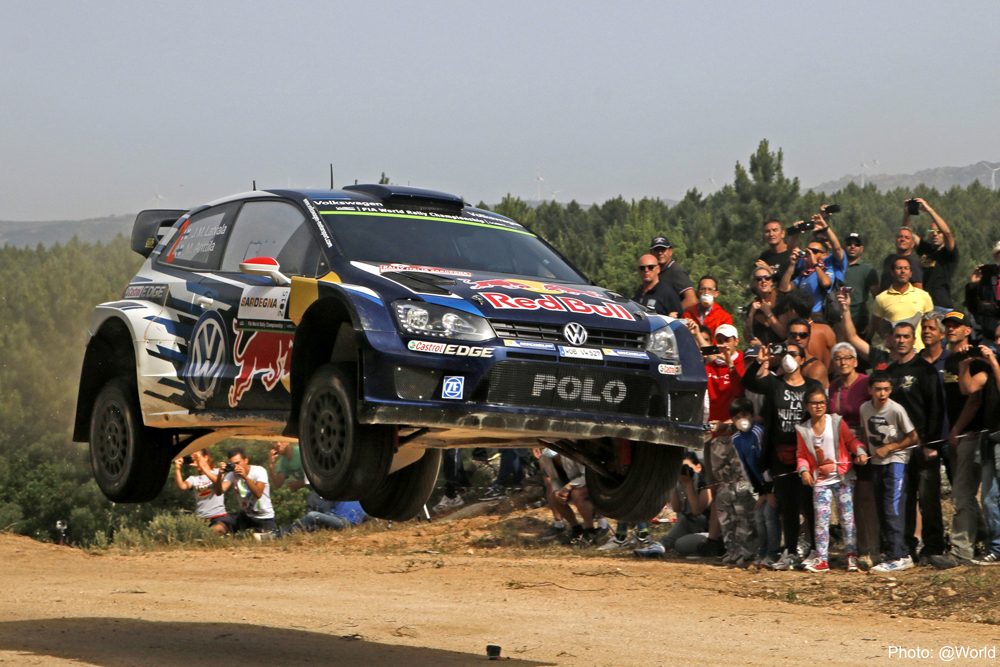 A big step forward in the race for the World Championship: Sébastien Ogier/Julien Ingrassia (F/F) and Volkswagen made a big point with victory at the Rally Italy. Ogier and Ingrassia’s third win in a row on Sardinia allowed Volkswagen to significantly extend its leads in the Drivers’, Co-Drivers’ and Manufacturers’ Championships. After almost half the season in the FIA World Rally Championship (WRC), Ogier/Ingrassia are now 66 points clear of their closest rivals, while Volkswagen holds a 65-point lead. The road to the Polo R WRC’s fifth win of the season at the sixth rally of the year was literally a rocky one: faced with extremely tough conditions, scorching heat and the longest day of rallying for over a decade, the World Rally Car from Wolfsburg proved to be the fastest and most reliable. 14 special stages went to Volkswagen in Italy. Despite set-backs, Jari-Matti Latvala/Miikka Anttila (FIN/FIN) were able to fight their way back to finish sixth in Italy. Andreas Mikkelsen/Ola Fløene, returning for the second time under Rally 2 regulations, finished third behind their two team-mates to claim a bonus point on the Power Stage.

In contrast, Jari-Matti Latvala/Miikka Anttila (FIN/FIN) lost time on several occasions. However, they showed an exemplary attitude to score valuable World Championship points for themselves and Volkswagen. Two punctures on Friday and Saturday initially cost them about three minutes, while damage to the suspension following a collision with a rock on the racing line cost a further five. Despite this, Latvala/Anttila and a valiant mechanic – coupled with a magnificent driving display – ensured the damage was kept to an absolute minimum. In total, the Finnish duo won seven special stages – more than their team-mates. The final result: an outstanding sixth place, given the set-backs.

The kind of high temperatures that have virtually become a tradition on Sardinia made the Rally Italy a real scorcher – with air temperatures of around 29 degrees and up to 43 degrees out on the road. Faced with an extremely rutty gravel route, including large rocks, the drivers and co-drivers had to remain fully focussed at all times. This was a particularly tough challenge on Saturday: at 212.83 kilometres, this was the longest day of rallying since the 2002 Safari Rally. The long days meant the team was also pushed to its limit. The mechanics were working until shortly before midnight – the alarm then woke them again at five in the morning. However, the team provided the perfect backing for Ogier, Latvala and Mikkelsen and guaranteed three perfectly-prepared Polo R WRCs every morning.

Formula for success: the Rally Italy in facts and figures

The 27th victory for the Polo R WRC in the FIA World Rally Championship (WRC) and podium number 52 since the World Rally Car made its debut in January 2013: Volkswagen added new chapters to its remarkable success story on Sardinia. The Polo R WRC now has 406 stage wins from 592 special stages, having added a further 14 in Italy. Since the project started at the Rally Monte Carlo in 2013, the Polo R WRCs have completed a total of 30,108.95 kilometres against the clock. That is the equivalent of about three quarters of the way around the earth at rally speed.

“The Polo R WRC continued to perform well today, but after yesterday’s events it wasn’t really possible to make up any ground. That’s why we focussed on the Power Stage. Successfully. All in all, I should be happy with sixth place and a total of ten points after the Power Stage considering the problems I had this weekend. Despite this, there are also some positives to take away. We were fast over the entire distance. We can build on that for Poland. I’m looking forward to it already!“

“The Rally Italy had many highs and lows for Volkswagen. And ultimately a happy ending. The third win in a row here for Sébastien Ogier and Julien Ingrassia sees them take a big step forward in the Drivers’ and Co-Drivers’ Championship, and it is also worth its weight in gold for Volkswagen in the Manufacturers’ Championship. Winning this hot rally, which is very demanding on the car, is far from easy and certainly not a stroll in the park. We learned that the hard way with Jari-Matti Latvala and Andreas Mikkelsen. However, both made the most of difficult situations after the set-backs. I have the utmost respect for their effort too. I am pleased for the entire team and we can look back on an extremely successful first half of the season together. All the cogs fit together perfectly throughout the entire team – from driver to mechanic, engineer to chef, and logistician to medical department. We can all be very proud of that.“

… a milestone for Castrol, technical partner and supplier of Volkswagen Motorsport in the World Rally Championship and in circuit racing. During the Rally Italy, the lubricants manufacturer and “liquid engineering” brand achieved 1,000,000 Facebook fans for the first time. Congratulations!