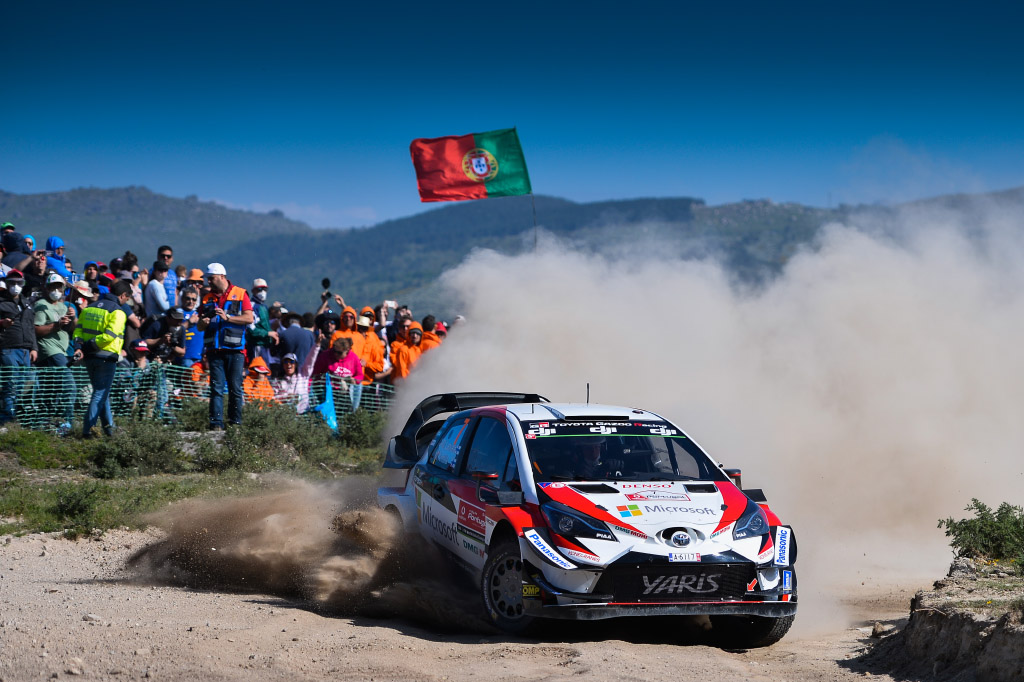 Saturday was a stronger day for the Toyota Yaris WRC on Rally Portugal. Jari-Matti Latvala returned to action and put his retirement yesterday firmly behind him, demonstrating his speed by claiming two stage wins. Esapekka Lappi also had a strong day, keeping himself in contention for a podium place in a closely-fought battle.

Restarting under the Rally 2 regulations, Latvala immediately got up to speed and won the first stage of the day, Vieira do Minho, where Lappi was third quickest. The Finnish pair was also in the top three on the third and final stage of the morning loop, Amarante, which was the longest of the rally at 37.6 kilometres. Latvala went on to take another fastest time on the penultimate stage of the day, Cabeceiras de Basto 2.

Throughout the day, Lappi’s times were only bettered by those running behind him on the road, who enjoyed more favourable conditions on the sandy gravel tracks as those at the front swept the road clean. Embroiled in a close fight for fourth, he ended the day 11.1 seconds behind the position, and within 15.8s of third place.

“This has been a positive day for us. We are very, very pleased to see Jari-Matti do so well today, with two fastest times and a very competitive day. The Power Stage will be an important target for him tomorrow. Esapekka meanwhile had a proper fight all day long, it was very tight. He showed that he can keep pushing for the whole day without making mistakes. Eleven seconds is a lot to catch up in the short stages that we have tomorrow, but the rally is still on and I am sure that he will keep pushing.”

“I’m really, really happy about today. We had two stage wins, so we know the speed is there. I still have a little bit of margin: particularly this afternoon when it was quite rough in places I was a bit more careful not to break the car, as it has been important for me to have a clean day. The car is fast and I have started to find in myself the speed and confidence. All the elements are now there so we just need to bring it to the end. Tomorrow my approach will be to try and carry on in the same way. I want to be competitive and to do another clean day, and then of course in the Power Stage, I will try to attack and try to get some points. The idea is try to and keep building the confidence ready for Sardinia.

The final day of Rally Portugal is set to be action-packed, with five stages scheduled. These take place in the Fafe region, including two passes over the Fafe stage itself, the latter as the Power Stage. This includes a famous jump, where last year Esapekka Lappi made an enormous leap that was later voted as the best action moment of the 2017 motorsport season in the FIA awards.