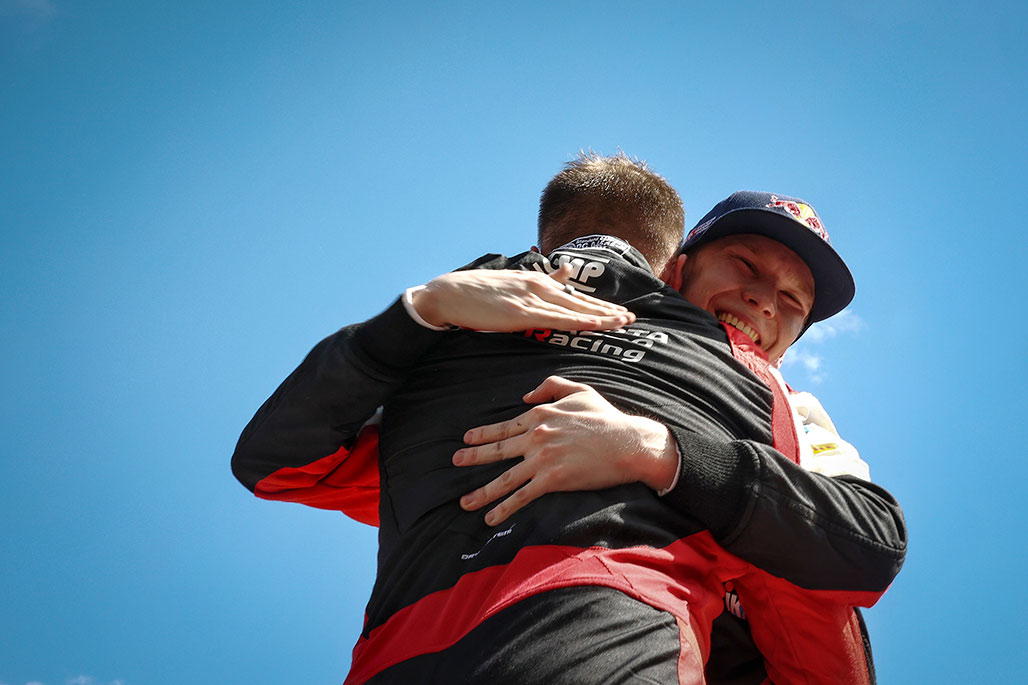 On a rally where he lacked knowledge of the stages after crashing out early on the event’s WRC debut in 2021, Rovanperä was in superb form throughout the weekend together with co-driver Jonne Halttunen. On a heavily rain-affected Friday he made the most of his position at the head of the road order to win six of the eight stages and open up an advantage of more than a minute over his rivals. Much of this margin was lost on Saturday morning when he suffered a damaged tyre, but he fought back well with a stage win at the end of the day to take a lead of almost 20 seconds into the deciding leg.

He continued that performance into Sunday’s first stage to extend his lead by more than 10s. The weather brought a further twist in the tail, however, with a sudden downpour of rain impacting the penultimate stage. With two rain tyres and two hard compound tyres, Rovanperä was disadvantaged in the extremely slippery conditions against those who had soft tyres, and conceded the overall lead by just 1.4s to Ott Tänak.

This set up a thrilling showdown for the rally-ending Power Stage, where conditions were dry and sunny – albeit with plenty of mud dragged onto the road as had been the case across all of the stages. Again on a combination of rain and hard tyres, Rovanperä produced a stunning run, 5.6s quicker than Tänak and 21.8s faster than anybody else to secure his second successive victory and a maximum points haul. That increases his championship lead after three rounds to 29 points. It is the 21-year-old’s fourth career WRC win – all in the space of nine events – and his first on asphalt.

Elfyn Evans already dropped around two minutes on Friday morning when he finished two stages with a tyre off the rim. After two stage wins he finished fifth overall and third in the Power Stage, scoring some important points towards both championships as he looks to move forward from a difficult start to his season. The team now leads the manufacturers’ standings by 42 points.

Esapekka Lappi missed most of the first day after hitting a large rock on the opening stage and damaging his car’s suspension. Once he restarted on Saturday he showed impressive speed in his first asphalt event in the GR YARIS Rally1, taking a fourth stage win of the weekend in Sunday’s first test. Between its three crews, the team won 14 of the 19 stages across the event, confirming the strong performance of the new-for-2022 GR YARIS Rally1.

Jari-Matti Latvala (Team Principal)
“This was an incredible performance from Kalle today. I would not have thought it was possible to win the final stage and win the rally with the tyres he had. Unfortunately our information did not see the rain coming in the penultimate stage, and we saw how hard it was to get the grip from the hard tyre. And then the Power Stage was so muddy and so slippery that I don’t know where Kalle was able to find that speed. The level he’s performing at now is incredible: He’s not showing the pressure and he’s able to be very cool and not worry about things. He really looks like the man to beat in the championship this year. With our other drivers we didn’t get the best results this weekend, but I think Elfyn really needed to just get a solid drive and doing the third fastest time on the Power Stage was great for the points, while Esapekka’s speed after restarting was fantastic to see.”

What’s next?
Rally de Portugal (May 19-22) is the first gravel event of the year: Based in Matosinhos near Porto in the north of the country, it features classic stages on sandy and rocky roads.