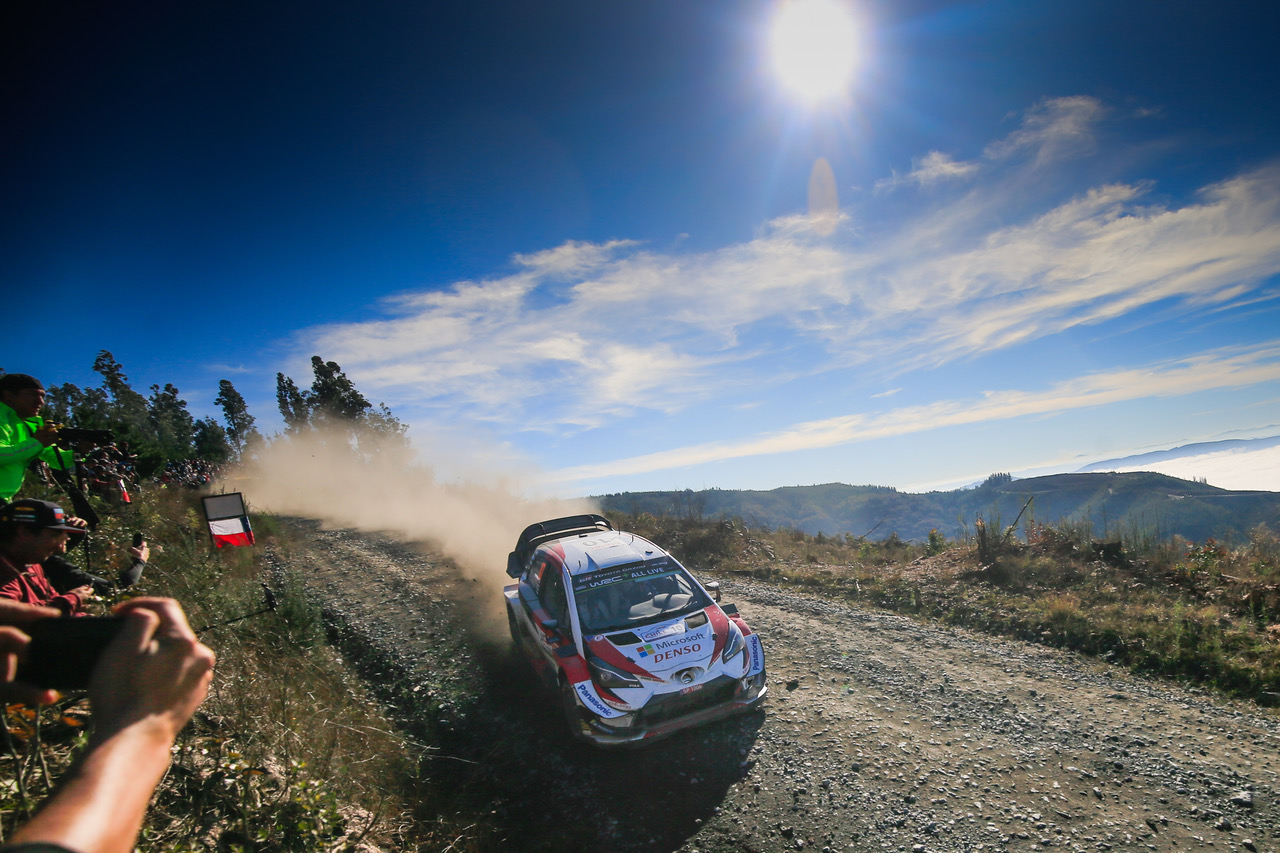 Ott Tänak continues to lead for TOYOTA GAZOO Racing World Rally Team heading into the final day of the inaugural Rally Chile, holding an advantage of half a minute with four stages remaining.

The second day of Rally Chile was made up of two loops of three stages, generally faster and wider than those run on the opening day. Following his strong performance on Friday, Tänak started the morning with a lead of 22.4 seconds. He increased that advantage to 34.6s by mid-day service after winning the third and final stage of the morning loop, and added another fastest time on SS11 during the afternoon, when sunny conditions were replaced by rain and fog.

Jari-Matti Latvala was involved in a close fight for second position for most of the day, but stopped in the final stage after hitting a rock in a ditch with the front-left wheel and damaging the driveshaft. The team will look to fix the car tonight so that Latvala can restart tomorrow.

Kris Meeke started the day fifth overall, but rolled his car in the opening stage. He still managed to complete the stage, and set strong times on the following two tests despite having to drive without a windscreen. After a great job by the team to repair the damage during the 40-minute lunchtime service, Meeke moved back into the top 10 at the end of the day.

Quotes:
Tommi Mäkinen (Team Principal)
“Rally Chile is proving to be a very difficult event for everybody, especially today: there was a lot going on through the whole day. This afternoon there was quite a dramatic change in the conditions with the fog and the rain, and the visibility looked bad. Unfortunately, Jari-Matti seems to have made a very minor mistake that has damaged the driveshaft. Kris was also caught out this morning: thankfully the damage was nothing too critical and our team did a great job to repair it in service. Ott has been managing everything really well and hopefully he can secure the victory tomorrow.”

Jari-Matti Latvala (Driver car 10)
“It was an eventful morning: in the first stage we had to drive behind Kris for a bit after his incident, but we were given the time back so it wasn’t a problem. Then in the third stage of the loop my tyres were already very worn, but we were still right in the fight for second place. In the afternoon, the stages didn’t seem to be suiting my setup so well: I didn’t have the same good feeling I had yesterday. On the final stage, I hit a rock in a ditch and damaged the front-left, and the driveshaft was broken so we couldn’t continue. It’s really disappointing after a strong weekend up to this point, but we won’t give up.”

What’s next?
The final day of Rally Chile is made up of four stages in total, beginning and ending with the Bío Bío test, with the second running as the Power Stage. Generally the roads are narrower, often lined by fences, but quick.

Key stage: Bío Bío (SS13 & SS16, 12.52 kilometres)
Seb Marshall (Co-driver car 5): “This is the shortest stage of the rally. It’s similar to shakedown in the beginning and at the end: quite twisty and technical uphill from the river and then downhill towards the coast. The middle section on top of the hill is much faster, a much wider road where you can really play with the car to get the line set up. While the start is quite forested, here it’s completely felled with open views.”