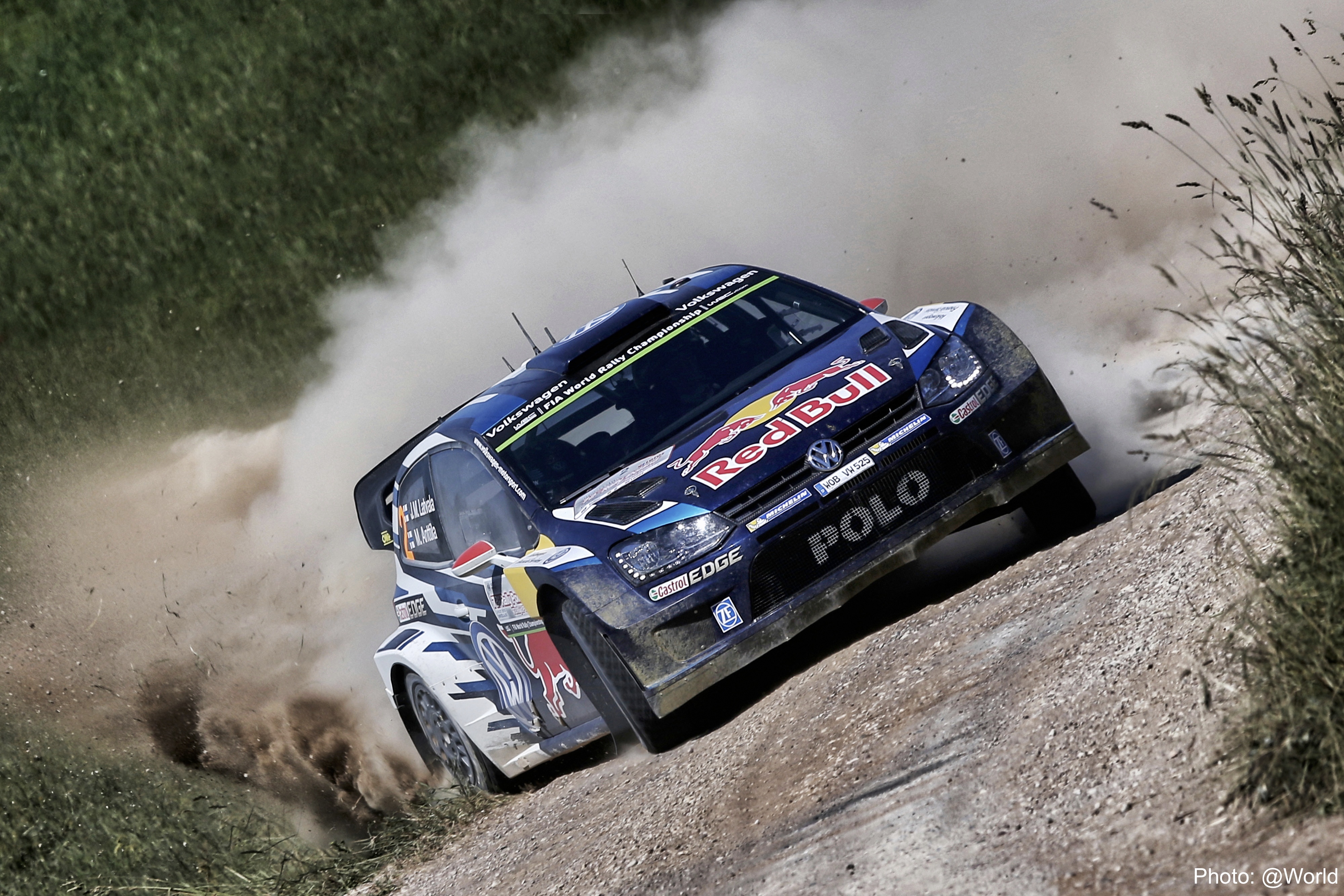 After the home success: Volkswagen with first opportunity to wrap up three WRC titles

“Wild by nature”: unique conditions on the Australian gravel

Trip Down Under: express preparation for trip round the world

Wolfsburg (04 September 2015). Following the successful Rally Germany on home soil, the Volkswagen Team now heads to the other side of the planet. It does so with three clear goals: the Rally Australia presents the Wolfsburg-based manufacturer with its first opportunity to wrap up all three titles in the FIA World Rally Championship (WRC) with the Polo R WRC with races still to come. Should they defend the lead they have established in the Drivers’, Co-Drivers’ and Manufacturers’ championships over the first nine rounds of the season, they would secure victory in all three competitions. Sébastien Ogier/Julien Ingrassia (F/F), Jari-Matti Latvala/Miikka Anttila (FIN/FIN) and Andreas Mikkelsen/Ola Fløene (N/N), who claimed a magnificent one-two-three at their recent home event in Germany, could once again make history Down Under – never before would the title championship have been decided at such an early point in the season. The recent one-two-three in Germany is not the only reason that Volkswagen goes into the event brimming with confidence: in 2014, Australia was the scene of Volkswagen’s first ever one-two-three with the Polo R WRC. The crews will be familiar with roughly three quarters of the challenging gravel routes around Coffs Harbour in the state of New South Wales from last year’s event. In total, they must complete 311.36 kilometres against the clock, spread over 17 special stages.

“We obviously want to take the momentum our home win has given us to Australia, although the conditions will be completely different Down Under,” said Volkswagen Motorsport Director Jost Capito. “For this reason, we will once again be fully focussed as we pursue our goals at the Rally Australia, for which we have prepared meticulously again: we would like to wrap up all three titles with races to come – and we have a realistic chance of doing just that. In each competition, we must defend the lead we have established so far. However, that is not as simple as it sounds. We will have to do another perfect job in order to emerge successful. If we do produce another flawless performance, then there is a good chance we will have something special to celebrate in Australia.”

What if … – the Drivers’ and Co-Drivers’ World Championship

The lead currently stands at 93 points – Sébastien Ogier and Julien Ingrassia hold their destiny in their own hands as they aim for their third WRC title in a row in the Drivers’ and Co-Drivers’ Championship. For this dream to come true in Australia, they must maintain a lead of at least 84 points over Latvala/Anttila and Mikkelsen/Fløene. Only the three Volkswagen driver/co-driver pairings can still mathematically be crowned champions in 2015. They can afford to lose no more than nine points to Latvala/Anttila – should Latvala win, second place and a bonus point from the Power Stage would suffice for Ogier. Should they finish ahead of Latvala/Anttila, the title is theirs. Given the fact that they currently trail the leaders by 109 points, the chances of Mikkelsen/Fløene winning the title are more mathematical than realistic.

What if … – the Manufacturers’ World Championship

Of the 139-point lead going into the Rally Australia, 129 must still be intact after the event for Volkswagen to wrap up its third Manufacturers’ title in the FIA World Rally Championship (WRC) in a row. Victory for either Jari-Matti Latvala or Sébastien Ogier would be sufficient to defend this lead – or, should closest rivals Hyundai win in Australia, second and fourth place for the two cars would also be good enough.

“Newry”, “Nambucca” and “Wedding Bells” – the Australian stages are a unique feature on the World Rally Championship calendar. “Wild by nature” is the slogan selected by the organisers of this season’s tenth rally. The character of the stages change from expansive, flowing high-speed passages on open terrain to narrow, winding sections through thick forest. The hard surface is also covered by a loose layer of fine sand. As such, the set-up for the cars will be somewhere between those used in Mexico and Finland.

However, this is not the only thing that makes the Rally Australia so special. The “Valla” special stage at the end of Saturday’s racing is a 7.94-kilometre night stage and will be broadcast live on TV and plus.wrc.com. “Wedding Bells” will also be shown live and forms the closing Power Stage, which could play a key role in the race for the Drivers’ and Co-Drivers’ titles. 28.6 per cent of the special stages are new territory for the drivers in 2015, with the Friday in particular requiring them to adapt to new routes in the form of “Utungun”, “Northbank” and “Bakers Creek”.

There are just three weeks between the Rally Germany and the Rally Australia – a tight schedule, given that one WRC round is right on the doorstep and the other demands the longest trip on the World Championship calendar. The three Polo R WRC for Ogier, Latvala and Mikkelsen needed to be ready to commence their journey to the fifth continent by air on the Wednesday after their home rally. That left only a few days to prepare the chassis, which were most recently in action at the Rally Finland. The logistics team completed an important part of the preparations back at the Rally Argentina. From there, the recce cars and equipment headed directly to Australia as ocean freight – cleaned and dusted thoroughly, as Australian import regulations are particularly strict. In total, roughly 100 tons were packed off on a voyage around the world, of which 18 tons were air freight.

“The Rally Australia is unique. The forests, the harbour, and the whole atmosphere. It is more reminiscent of a vacation – but it obviously won’t be a holiday for the team and me. Sure, we will acclimatise a bit in Coffs Harbour and the surrounding area ahead of the rally. However, when we get down to the serious business we have to be, and will be, wide-awake and fully focussed. I like the fast, flowing special stages in Australia – particularly the combination of wide and narrow roads through the forest and on open ground. It is a bit like the Rally Finland and, as is well-known, that really suits me. On other sections, you are flat-out close to large trees. I really like that too. But you have to be careful: the surface is different to in the European forests. The car must have the perfect set-up. In Australia, you need a car set-up somewhere between the Rally Mexico and the Rally Finland. We have good reference values, which we will use. I am very confident about Australia. Last year it was very tight between Sébastien Ogier and me, and my goal for this year is to be up there challenging for the win again.”

News from the Volkswagen team

+++ A new head mechanic for Andreas Mikkelsen and Ola Fløene: Yari Mitschinelli takes over this job as of the Rally Australia for the pair currently third in the World Championship. Mitschinelli has been working as a mechanic for the duo for the past three years in the WRC. Artur Wronski, who was the Norwegians’ previous head mechanic and won the Rally Dakar with Volkswagen, will take over the management of the test team in the future. +++

+++ There will be a one-off change of head mechanics for Jari-Matti Latvala/Miikka Anttila at the Rally Australia. Latvala and Anttila’s Polo R WRC will be serviced by Artur Wronski and their regular mechanics for the one race Down Under. Jose Azevedo, who has been a loyal servant of Latvala/Anttila for many years, is unable to make it Australia for a very good reason. He has had to remain in Portugal for the christening of his nephew, to whom he is also godfather. +++

The number for the Rally Australia: 76.9 per cent

Volkswagen travels to Australia with fond memories. Last year the team secured the Manufacturers’ title in the FIA World Rally Championship (WRC) in Coffs Harbour, with races still to come. They could achieve the same feat in 2015 – and, in doing so, equal last year’s record. Back then, Volkswagen was crowned champion manufacturer after 10 of 13 rallies – the earliest the title had been decided in WRC history. The round Down Under is once again the tenth of 13 races in 2015.