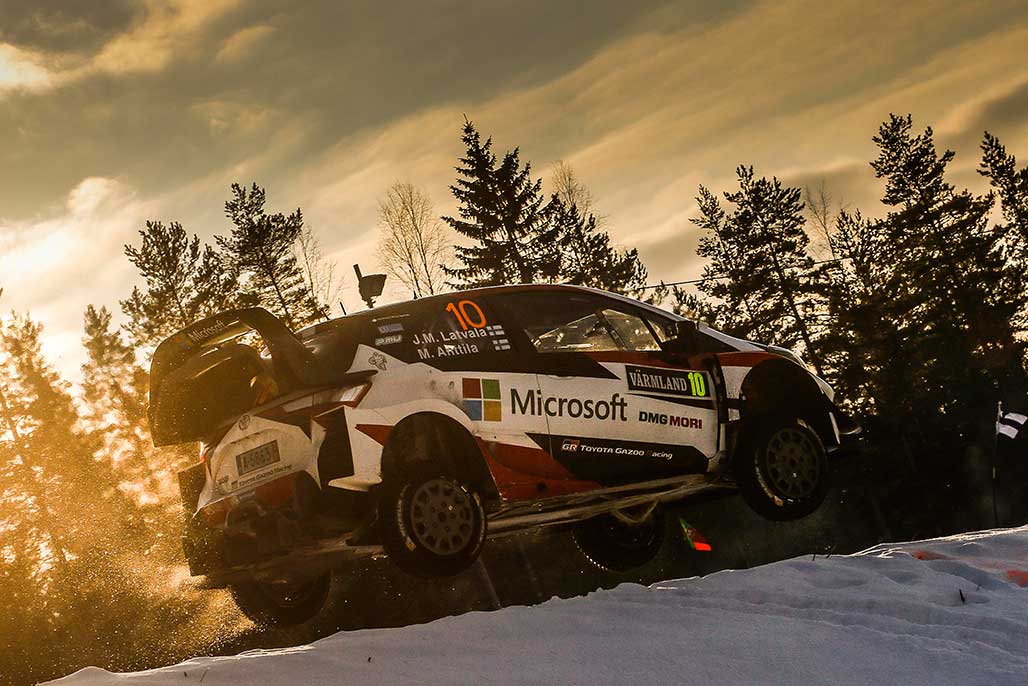 With just one day, three stages and 58 kilometres of Rally Sweden left to go, Jari-Matti Latvala is in first place after a problem-free Saturday, having moved into the front on the very last stage after the rally leader broke his steering on the final super special in Karlstad. But Jari-Matti will have a huge fight on his hands tomorrow to keep the position, as he is only 3.8 seconds ahead of his closest rival. Juho Hänninen rejoined under Rally 2 regulations, after hitting a tree yesterday. He made up eight places in six stages, dedicating his day to teamwork by testing new settings on the Yaris WRC.

After a solid day of action, the biggest drama came on the final stage when Jari-Matti claimed an unexpected lead. Again, he set stage-winning pace during Saturday, but struggled on occasions with tyre wear and also lost a bit of time behind another competitor, who had previously gone off on SS14.

“Of course rallying is full of drama and, although we have taken a surprise lead, we feel very sorry for our competitor who had a problem on the last stage. Jari-Matti has been in a big fight all day and this will become even more intense tomorrow. In these situations it’s quite hard to know what to do. I know that Jari-Matti will want to bring the car home so that will maybe affect his thinking. Juho has spent more time in the Yaris WRC and we have tested some future things, which will be useful.”

”It’s been another good day for us, although not without some small issues: but these were actually nothing to do with the car. There was quite a lot of loose snow and it was hard to keep control in places, especially on the downhill sections. At one point, I even thought I had a puncture. We decided to take just one spare tyre in the car for the afternoon to help us in this big fight. But we also had some problems with tyre wear, as well as losing time behind another car. Tomorrow will be a big day so we have to try our best. The car and the team is getting better all the time, so I feel good.”

The Vargasen stage today contained Colin’s Crest, named after former world champion Colin McRae, who was especially spectacular over the jump. The current record is held by Norway’s Eyvind Brynildsen, who covered 45 metres at 165 kph last year. This year the record wasn’t actually broken: although another Norwegian, Mads Ostberg, came very close with a 44-metre jump.

The final day of the rally contains just three stages: one 21.19-kilometre stage run twice, followed by the 16.43-kilometre Torsby power stage. The cars leave parc ferme at 06:35 and there is no service halt between stages, meaning that crews will have to be especially careful to avoid any mistakes.