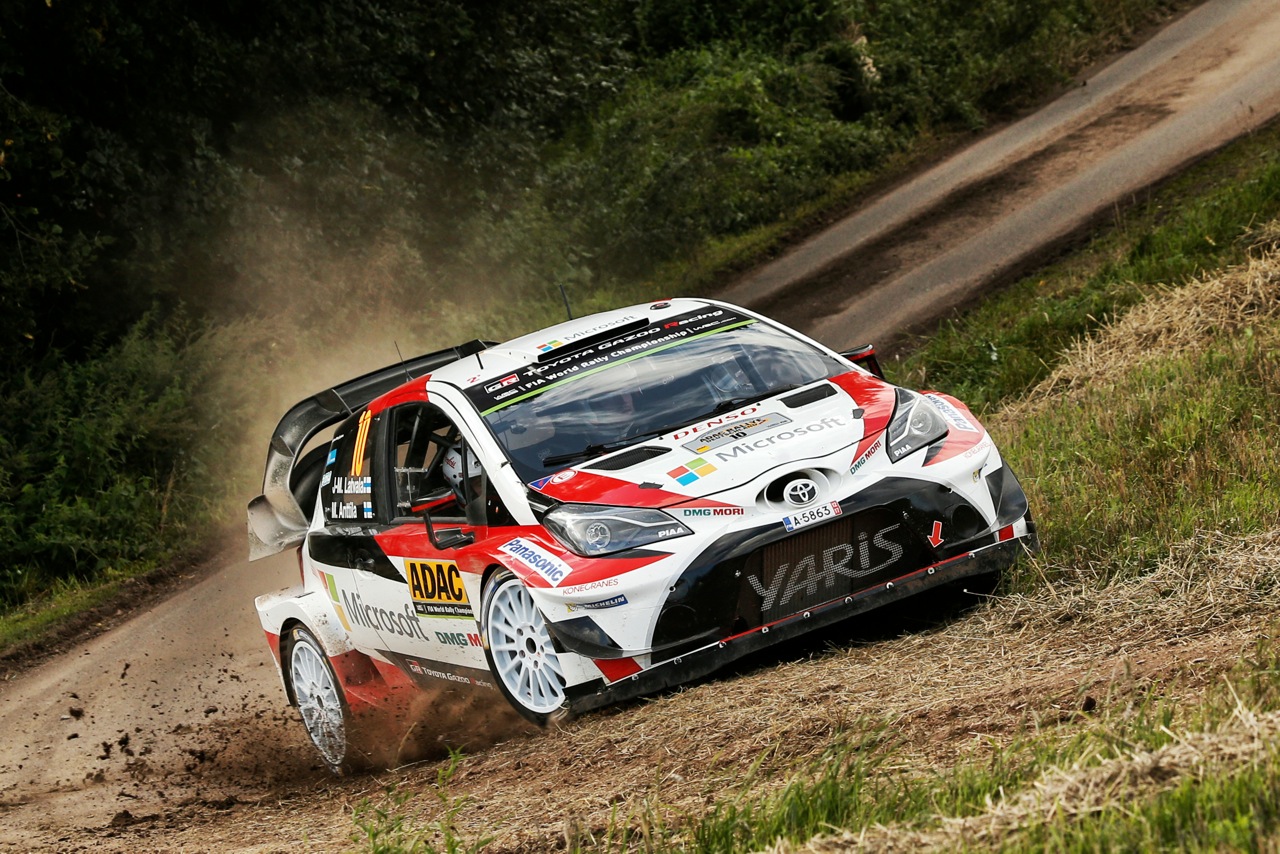 TOYOTA GAZOO Racing World Rally Team took two more stage wins on day three of Rallye Deutschland. The first of these came when Juho Hänninen went fastest on the first run over the notorious Panzerplatte stage: one of the most famous and difficult tests of the entire FIA World Rally Championship. On a rally he is contesting for the first time in six years, Hänninen then continued his fine performance when he climbed to fourth overall at the beginning of the afternoon.

Unfortunately, Panzerplatte – which weaves for 41.97 kilometres through the Baumholder military ranges – showed its teeth to all three Toyota crews when it was run for the second time. Hänninen suffered a broken damper after an impact in the stage, affecting him in the two tests that followed before service. Nonetheless, he is only 4.2 seconds away from fourth place with four stages remaining tomorrow. Both Jari-Matti Latvala and Esapekka Lappi had to stop in Panzerplatte to replace punctured tyres. Latvala sits in seventh overall after a technical issue yesterday, but he was second quickest and then fastest of all on the day’s last two stages. After retiring from the first leg with broken suspension, Lappi was able to restart this morning and continue his learning process in his rookie campaign in a World Rally Car.

“It wasn’t a very easy morning for me. I was a little bit slow and I made some mistakes. In the afternoon I tried to push. Unfortunately, we lost some time with the puncture but at least the performance was there. We just need to get things fitting together. The speed was good in the afternoon so we will try to transfer that same feeling to tomorrow.”

Much of today’s action, including the fearsome Panzerplatte stage, took place in the Baumholder area, a military training ground. The roads here are unlike any others in the WRC, consisting of broken concrete that offers less grip than traditional asphalt, particularly when wet. The roads are also lined by hinkelsteins. These large concrete blocks were designed to keep tanks on the road, so rally cars are advised to keep well away.

The rally concludes tomorrow with two runs over the Losheim am See and St. Wendeler Land stages. The first car is due to leave service at Bostalsee at 06:40, with the crews then travelling close to the border with France for Losheim am See. The St. Wendeler Land test finishes close to the service park, and will be the scene of the rally-ending Power Stage from 12:18.