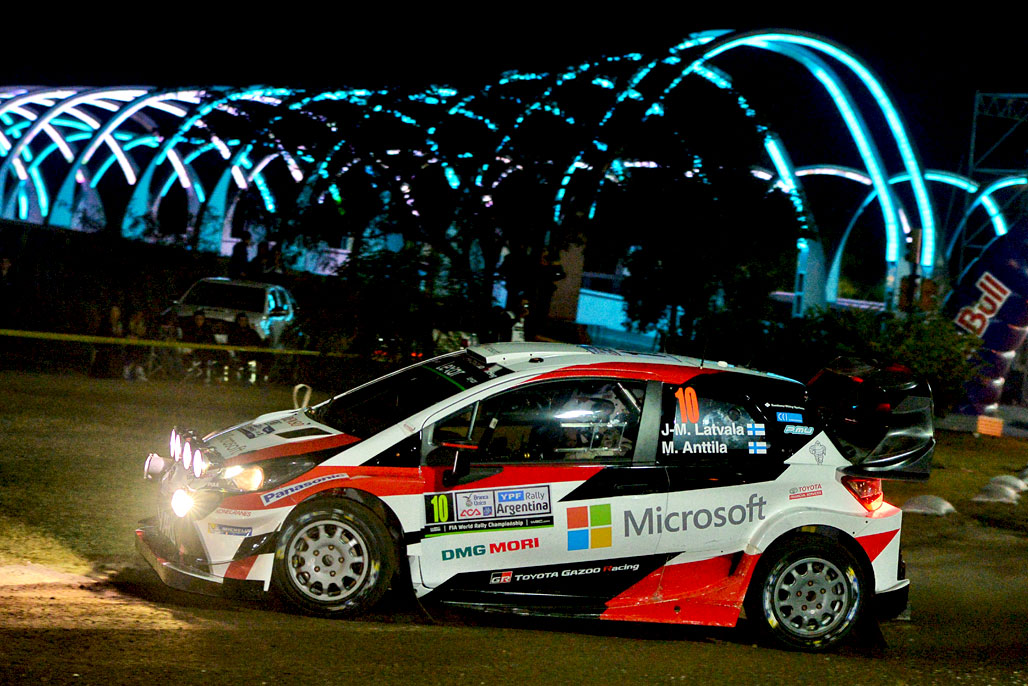 TOYOTA GAZOO Racing WRT driver Jari-Matti Latvala was fastest in the shakedown, on his ninth appearance in Argentina, with both Yaris WRC cars also figuring in the top 10 positions on the opening super special stage in Cordoba. However, this was just a taste of the action, with the drivers set to tackle the first full day of tricky stages tomorrow.

Jari-Matti Latvala and Juho Hänninen completed all the work planned during shakedown, before tackling the 1.75-kilometre stage on Thursday evening. This was a n mixed asphalt and gravel stage, so quite different to the gravel roads that form the bulk of the rally route. Latvala was classified fifth while Hänninen was 10th on the first stage.

“Argentina was always going to be a challenging event, maybe one of the most challenging of the year, so it’s quite hard to predict anything from what we have seen so far. Obviously it’s great to be fastest in shakedown, but that does not mean a lot: the big test starts tomorrow. We completed everything we wanted to do in shakedown, which is an important part of the preparation here. Our drivers and crew are ready for the challenge.”

“The feeling is good to start the rally with. Maybe I could have been quicker in a few places, but otherwise the performance was good. Now let’s see what happens over the next few days. No issues so far.”

After the last round in Corsica, Jari-Matti Latvala and Miikka Anttila broke the record for the highest number of rallies that a driver and co-driver pairing have ever contested together. That was their 170th WRC start as a pair, breaking the record previously held by Sebastien Loeb and Daniel Elena. Anttila is currently the second-most experienced co-driver in WRC history, with Argentina being his 185th start, but the Finn is likely to break Denis Giraudet’s record of 188 WRC starts later this year.

Tomorrow’s action takes in eight stages: six normal stages, plus two runs through a 6.04-kilometre spectator super special. The drivers will leave parc ferme at 07:00 and then return at 19;43, more than 12 hours later. In between the stages there is a service halt at Villa Carlos Paz, but this is still one of the most demanding days of the year.