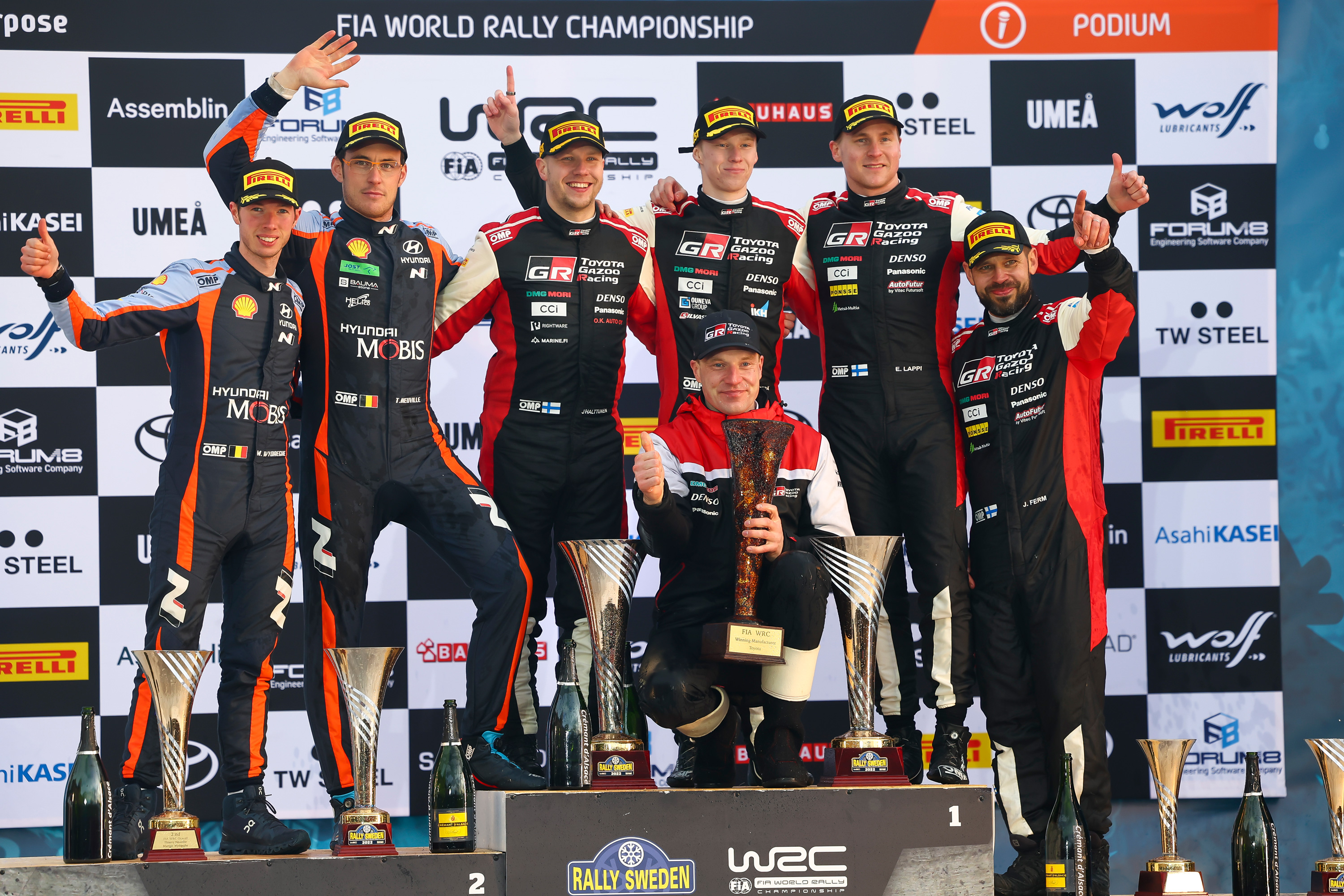 The TOYOTA GAZOO Racing World Rally Team is celebrating the first win for its new GR YARIS Rally1 car after Kalle Rovanperä secured victory on Rally Sweden, round two of the 2022 FIA World Rally Championship. Rovanperä’s fellow Finnish driver Esapekka Lappi finished third to complete a double podium finish for the team on his first start for TGR since 2018.

For most of the rally, all three of the team’s drivers were part of a close fight for victory on the unfamiliar, high-speed, snow-covered roads around the event’s new base in Umeå. Rovanperä was disadvantaged on Friday by having to run first on the road as the highest-placed driver in the championship, but concluded Satuday leading team-mate Elfyn Evans by 8.3 seconds.

Evans was penalised 10s overnight after an incident at the end of Saturday’s final stage, but his hopes of victory were ended in Sunday’s opener. Having started with the centrally-supplied hybrid system deactivated due to an issue, Evans then had a spin in the stage and damaged the front of the car. After stopping to make repairs he reached the end of the stage but, with the hybrid unit not showing the green light as required, was forced to retire in accordance with FIA safety procedures.

Rovanperä won the first of Sunday’s four stages as he added to his lead, even though he was also carrying a hybrid issue, and finished 22s clear as he and co-driver Jonne Halttunen secured the third win of their WRC career. By winning Rally Sweden, Rovanperä emulates his father Harri who achieved victory on the event in 2001. He has also moved into the drivers’ championship lead by 14 points.

Lappi was in a close fight for second position throughout Sunday, ultimately finishing just 8.6s away as he and co-driver Janne Ferm completed a fantastic comeback weekend with the team.

TOYOTA GAZOO Racing has also taken the lead of the manufacturers’ championship with an advantage of 24 points.

Jari-Matti Latvala (Team Principal)
“Kalle did an incredible job to win this rally. At the start of the weekend I was a bit nervous how he would manage being the first car on the road, but he handled it very well and later in the rally the speed he had was really impressive. Thanks to him for delivering our first victory with the GR YARIS Rally1 and to the whole team for their hard work to make it happen. What happened to Elfyn this morning was very unfortunate for him. But having Esapekka also on the podium in his first rally back helped us score some very important points, while Takamoto also did a great rally too.”

What’s next?
Round three of the 2022 season is the Croatia Rally on April 21-24, taking place on varied asphalt roads around the capital city Zagreb.