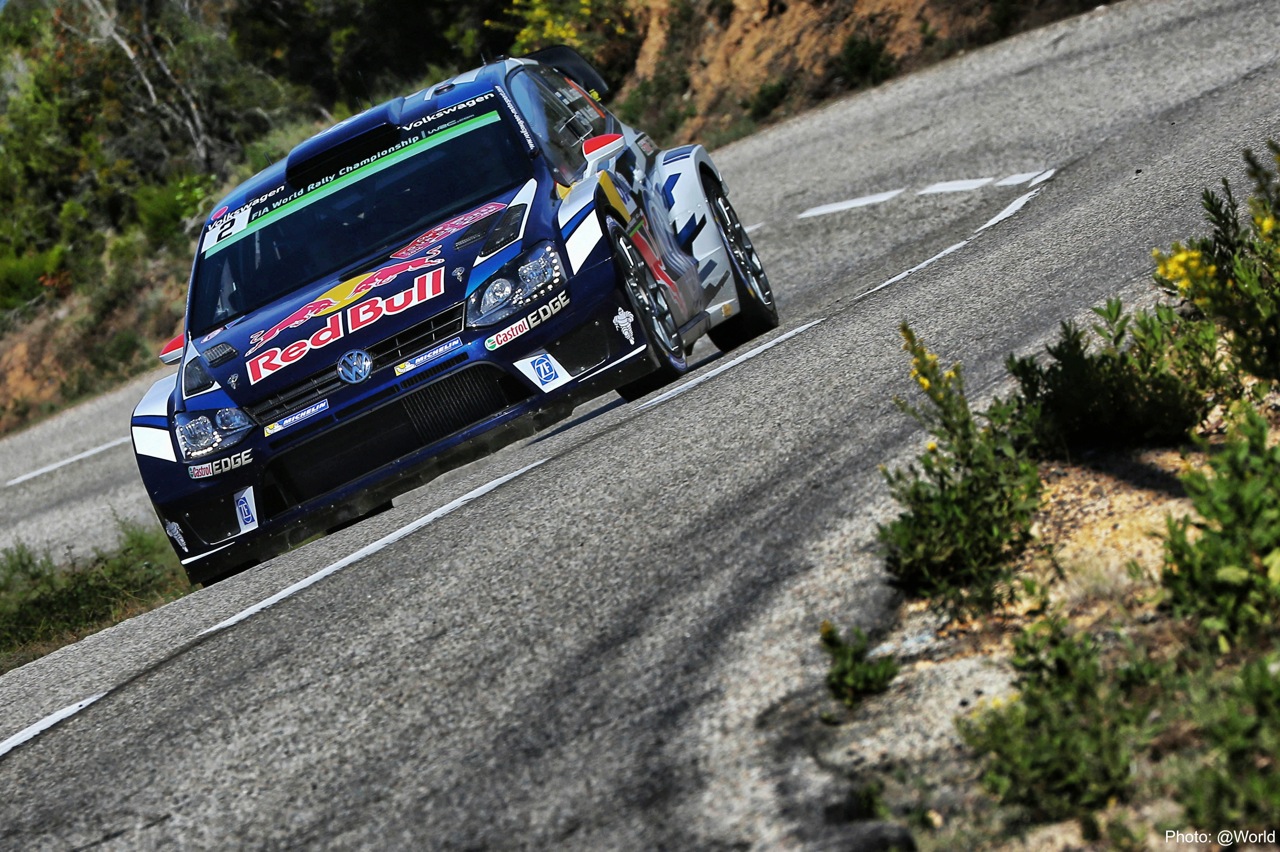 Only rally of the year on gravel and asphalt

Three title opportunities at the Polo R WRC’s 50th outing in the World Rally Championship – Volkswagen lines up at the Rally Spain fully focused and brimming with optimism. Come the end of round 11 of 13 in this season’s FIA World Rally Championship (WRC), Sébastien Ogier/Julien Ingrassia (F/F) could be crowned champions in the Drivers and Co-Drivers’ Championship for the fourth year in a row. Team-mates Andreas Mikkelsen/Anders Jæger (N/N) are best placed to stop them. However, the winners of last year’s Rally Spain trail the defending champions by 68 points in second place in the overall standings.

As well as strong opposition from Hyundai, Citroën and M-Sport-Ford, the third Volkswagen duo of Jari-Matti Latvala/Miikka Anttila (FIN/FIN) will also have their sights set on victory in Spain – after three runner-up finishes in a row, they are the only Volkswagen crew yet to win in Catalonia with the Polo R WRC. Volkswagen could also get its hands on the title in the Manufacturers’ World Championship. To achieve this, however, they would be dependent on other results going their way.

The Rally Spain, which features 321.08 kilometres against the clock, spread over 19 special stages, is a one-off in the World Rally Championship – it is the only race held on both gravel and asphalt.

Titles, theories, temperaments: how it stands in the Drivers’, Co-Drivers’ and Manufacturers’ Championships

What must Sébastien Ogier and Julien Ingrassia do to hold the destiny of the world championship title in their own hands? The defending champions must finish at least third and score one point on the Power Stage, in order to claim their fourth WRC title, regardless of how their closest rivals, team-mates Andreas Mikkelsen and Anders Jæger, fare. As well as the two Volkswagen duos, Thierry Neuville/Nicolas Gilsoul (B/B, Hyundai) also have an outside chance. Should Ogier/Ingrassia score one point in Spain, or Neuville/Gilsoul fail to pick up maximum points, then the three-time champions would be out of reach of the pair currently third in the overall standings. In this case, the 2016 world rally champion would be guaranteed to be a Volkswagen driver.

The Manufacturers’ Championship has also come down to a duel between Volkswagen and Hyundai. The trophy would be destined for Wolfsburg with races still to come, if Volkswagen were to score at least 20 points more than Hyundai.

It’s all about the mix: gravel and asphalt demand quick changeovers

Through the coastal mountains of Catalonia and the central Catalan basin at rally speed, sometimes on gravel, sometimes asphalt – the Rally Spain is the only rally on the WRC calendar with a mixture of surfaces. While Friday’s special stages are all held on gravel, the cars will predominantly be on asphalt roads on Saturday and Sunday. The driver who can switch quickly from one rally mode to another will have a big advantage here. 115.90 kilometres of special stage are on loose ground, 205.18 kilometres against the clock are on hard asphalt.

The most intense service of the year – a new car in 75 minutes, please

1,348 components to be replaced in 13 modules – the Volkswagen mechanics face what is probably the most intense service of the year on Friday evening. When gravel mode is replaced by asphalt mode, the Polo R WRC is transformed from a “long-legged” gravel car to a low-lying asphalt racer. The 318-hp four-wheel drive car is fitted with new front and rear axles, giving it chassis components from the asphalt set-up, different brake discs and pads, and new spring/damper units. There is some good news for the mechanics, however: instead of the usual 45-minute flexi service, the Volkswagen team this time has 75 minutes to complete the service.

For the third time since 2014, the Rally Spain will open with the “Barcelona” spectator stage at the site of the 1992 Olympic Games at the foot of Montjuïc. The route for the spectacular opening stage on Thursday evening passes the terraced grounds of the 1929 International Exposition and within a few metres of Mies van der Rohe’s world-famous German Pavilion, which is regarded as an architectural icon.

The Rally Spain is one of Volkswagen’s very favourite rallies: the Polo R WRC made its 25th WRC appearance here two years ago, and the chefs are already hard at work preparing a cake with 50 candles on it for this year’s outing in Spain. The Volkswagen team has also celebrated winning world championship titles here in the past: the Wolfsburg-based carmaker won its first Manufacturers’ title here in 2013, while Sébastien Ogier and Julien Ingrassia completed a successful defence of their Driver and Co-Drivers’ Championship one year later. And there was also a special victory to celebrate last year: in 2015, Andreas Mikkelsen claimed his maiden WRC victory. Few rounds of the World Rally Championship could hold fonder memories than Spain does for Volkswagen.

Jari-Matti Latvala, Volkswagen Polo R WRC #2
“The Rally France was a tough weekend for me. We have looked very carefully at why that was the case, and have drawn our conclusions. We are now looking ahead to the Rally Spain – a rally I really enjoy, and where I have finished runner-up for the last four years. Good results like the ones I’ve enjoyed in Spain obviously help you to look ahead again after a challenging rally like I had last time out. You must pay particular attention to the Recce in Spain, and ensure that the pace notes are even more accurate than usual. Only a few changes have been made to the route, so there is no need to make drastic changes to the pace notes. The special stages in Spain are also shorter than in France, which suits me. All in all, I’m very motivated to do well at the Rally Spain. After my previous results there, this is an event I really want to win.”

Sven Smeets, Volkswagen Motorsport Director
“The Rally Spain has always been good to Volkswagen in the past. We obviously have a lot of work to do if our goal is once again to wrap up all the WRC titles before the end of the season. The unique combination of gravel and asphalt seems to suit our drivers and co-drivers, particularly Sébastien Ogier and Julien Ingrassia. They have the opportunity to be crowned world champions here, regardless of other results. Anyone who knows them, will know that they would prefer to do this with a win. However, we are also well aware that the opposition has closed the gap this season, particularly on asphalt, and that we cannot take good results for granted. As a team, we must remain focused at all times at the Rally Spain if we want to win again. And we do want to win again.”

Number for the weekend: 50

The Polo R WRC is making its 50th appearance in the World Rally Championship at the Rally Spain. Time to take a look at its record so far: the world rally car from Wolfsburg has so far achieved 83 podium finishes, 40 of them victories, and has won exactly 600 of a possible 894 special stages. The Polo R WRC has occupied the top three spots at the end of 104 stages. Of the 49 Power Stages held so far, 37 been won by a Volkswagen driver. Bonus points, awarded to the top three on the Power Stage, have gone to Wolfsburg on 88 occasions. Together, the three Polo R WRCs have completed 46,075.46 kilometres against the clock, with an average stage length of 18.97 kilometres.