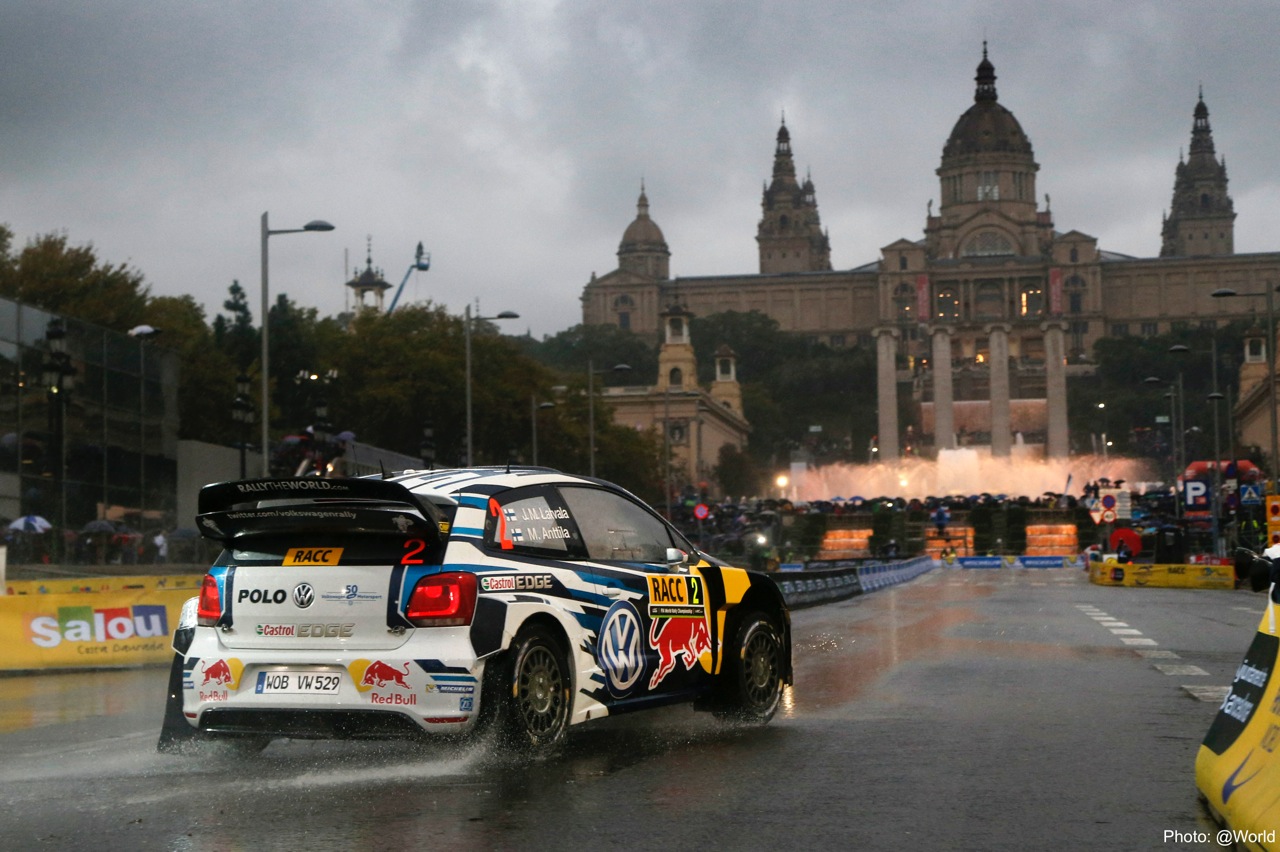 Thousands of spectators at the site of the 1929 International Exposition

Font Mágica, world architecture and motorsport – the 2016 Rally Spain got underway in pouring rain in Barcelona. Sébastien Ogier/Julien Ingrassia (F/F) finished third on Thursday’s only special stage, which took place at the foot of Montjuïc, the hill that stands proudly above the Catalonian metropolis. The three-time world champions made the best of their situation and trail Ott Tänak/Raigi Mõlder (EST/EST, M-Sport-Ford) by just 3.5 seconds going into the first “real” day on Friday, which consists of six gravel stages. Andreas Mikkelsen/Anders Jæger (N/N) ended the opening stage in eighth place in their Polo R WRC. Volkswagen team-mates Jari-Matti Latvala/Miikka Anttila (FIN/FIN) were 15th fastest.

Thousands of fans lined the 3.2-kilometre spectator stage to cheer on the drivers and co-drivers in the FIA World Rally Championship (WRC) – despite some heavy rain at times. For the third time in a row, the route led the cars through the site of the 1929 International Exposition, past Mies van der Rohe’s iconic German Pavilion, the Font Mágica mountain and the Palau Nacional. Montjuïc provided the venue for a Formula One Grand Prix on four occasions in the 1960s and 70s. This special stage has become a permanent fixture at the Rally Spain since 2014.

Jari-Matti Latvala, Volkswagen Polo R WRC #2
“I am actually happy with my performance, only the time was much worse than I expected. The very heavy rain made the conditions very challenging. That will also be the case tomorrow, when we tackle the first gravel stages. That is when the rally really begins.”

Sven Smeets, Volkswagen Motorsport Director
“The start on Montjuïc is always particularly atmospheric. Even in the rain, many spectators are determined not to miss the opportunity to watch the world rally cars in action. The stage was far more challenging than usual, due to the rain. Emotionally, however, it is one of the best the World Rally Championship has to offer. After this good start, we are now looking forward to the first gravel stages on Friday. Given the unsettled weather, they could prove to be a real challenge.”