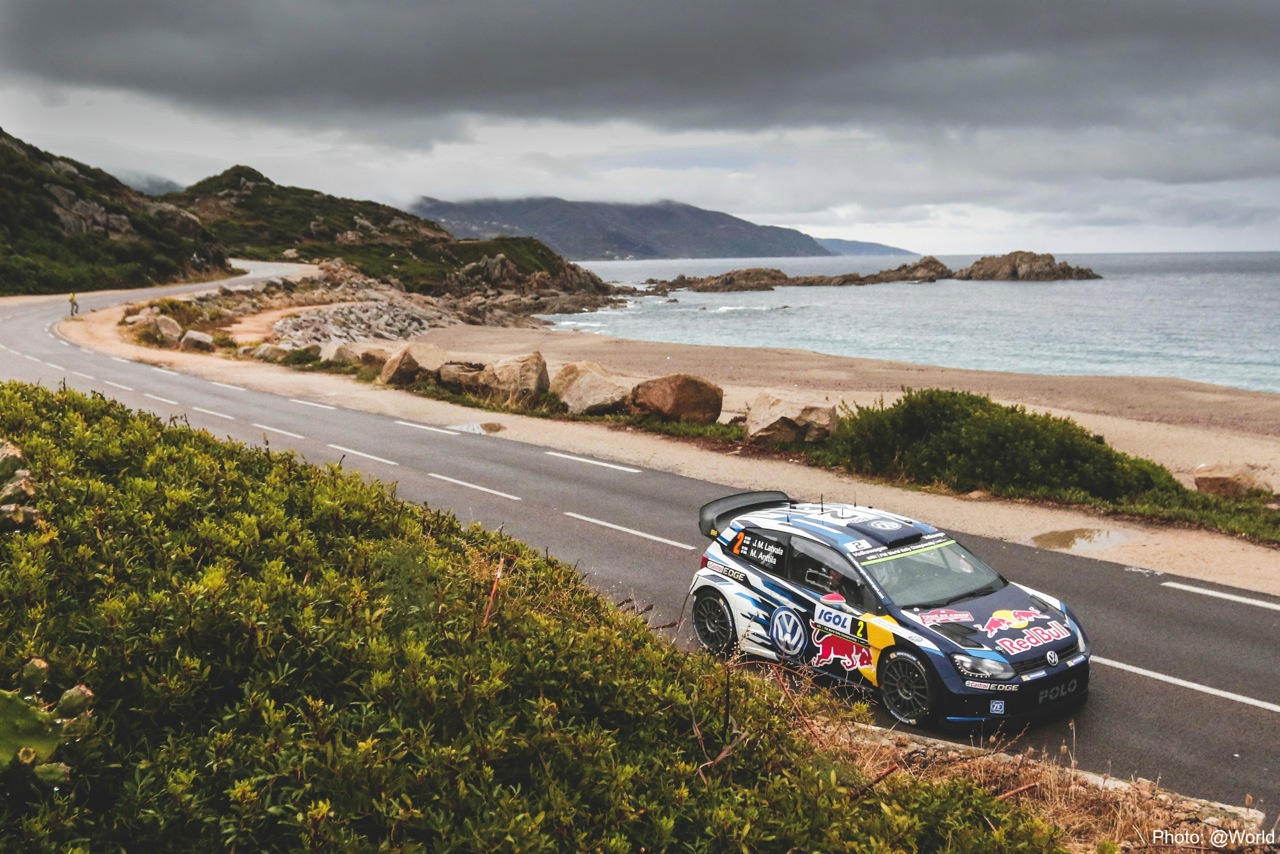 Wolfsburg (02 October 2015). Just two special stages, but enough stories to write an entire book: of the Volkswagen drivers at the Rally France, Jari-Matti Latvala/Miikka Anttila (FIN/FIN) coped best with the extremely difficult conditions on day one. The second-placed pair in the FIA World Rally Championship (WRC) ended the opening leg on Corsica third behind Elfyn Evans/Daniel Barritt (GB/GB, M-Sport-Ford) and Kevin Abbring/Sebastian Marshall (NL/GB, Hyundai), having overcome torrential rain and muddy roads on Corsica. After two of the day’s three scheduled stages – one was cancelled due to landslides – Latvala/Anttila are 22.9 seconds off the lead. All four of the manufacturers involved in the World Rally Championship have one car in the top four at the end of an eventful opening day of the Rally France. The best-placed Citroën duo was that of Mads Østberg/Jonas Andersson (N/S) in fourth place.

Latvala and Anttila‘s Volkswagen team-mates Sébastien Ogier/Julien Ingrassia (F/F) lost about 1:40 minutes due to a slow puncture. They are tenth overall, 1:13.2 minutes off the lead and facing a Herculean task on Saturday and Sunday, as they look to fight their way back into contention. Andreas Mikkelsen/Ola Fløene (N/N) are seventh in the third Polo R WRC after 65.55 of the scheduled 289.04 kilometres against the clock – 44.5 seconds behind the overnight leaders.

Jari-Matti Latvala, Volkswagen Polo R WRC #2
“I was very happy with the first stage, as it was a clean run and I did not lose a lot of time to my team-mate Sébastien Ogier. However, the second special stage was a different story. I took it very cautiously. I made a conscious decision to drive it that way, as I was determined to get through safely without any problems. The heavy rain made it extremely slippery and there was a lot of aquaplaning. The whole day reminded me of the Rally Monte Carlo. You were constantly aware of the risk of getting a puncture. All in all, given the tricky conditions, it was a good day for us. If we make it back to the hotel dry, I will be happy.“

Jost Capito, Volkswagen Motorsport Director
“Just two special stages – but the Rally France still produced more than its share of stories. When the conditions are as extreme as this, you need plenty of luck to come out on top. Sébastien Ogier did not have that luck today – although he was by far the fastest driver and did not make any mistakes. A stone punctured the tread of his tyre. In contrast, Jari-Matti Latvala and Andreas Mikkelsen made it through without any major problems. They took a cautious approach, accepting they would lose some time, and still have every chance of finishing on the podium – if not winning. That remains the goal.”

… 157 kilometres per hour. That was the wind speed generated by the storm front over Corsica on Thursday night and Friday, which deposited 361 litres of rain per square metre in the north of the island. As well as copious amounts of rain, muddy service locations and damp shoes, the “medicane” – as this Mediterranean storm, akin to a hurricane, is known – also had something more pleasant in store for the teams. Late in the morning, the eye of the storm was directly over the Service Park in Corte, resulting in a brief period of glorious sunshine.