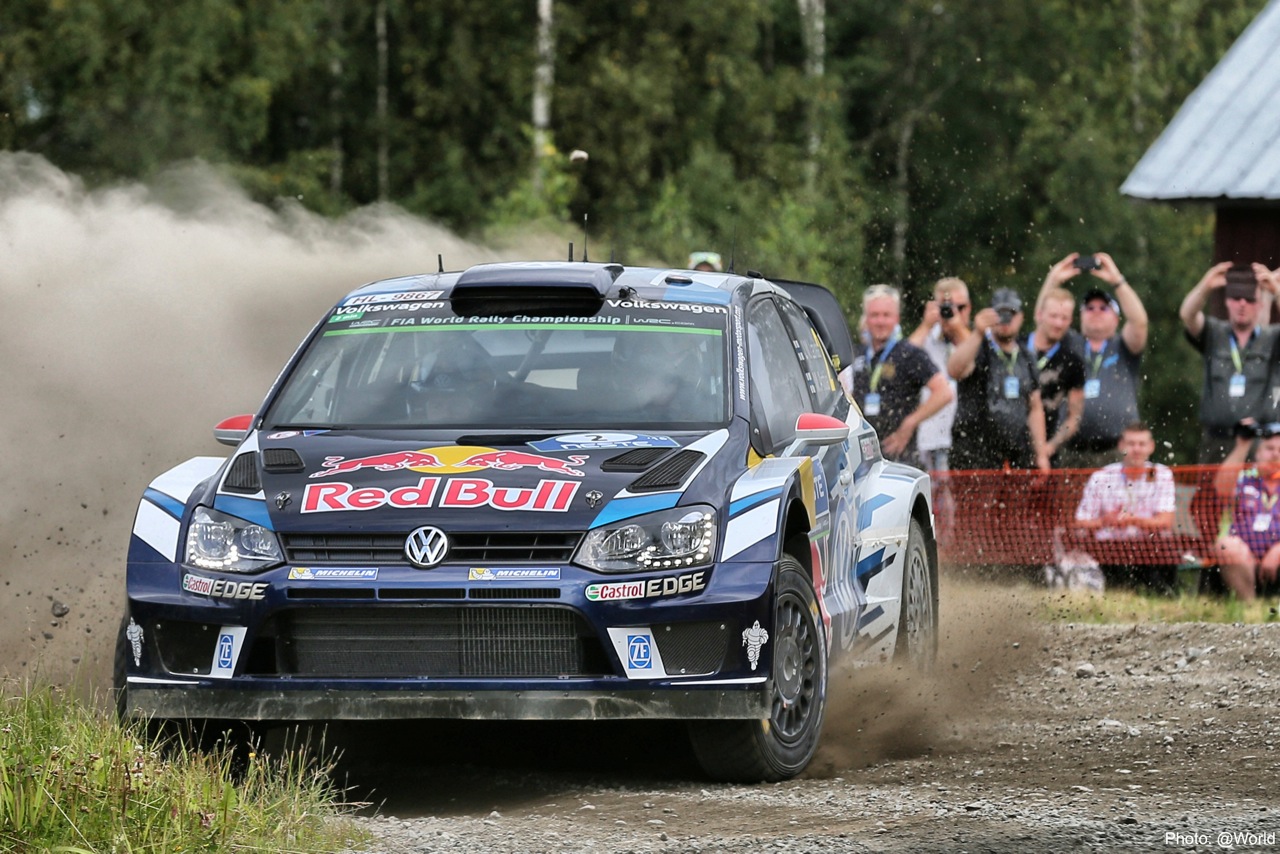 Latvala and Mikkelsen in battle for the lead; Ogier loses 16 minutes

Extremely fast and extremely hilly – the 66th edition of the Rally Finland really lived up to its nickname of “roller coaster” on Friday. And for Volkswagen, also in terms of drama: The Volkswagen works duos Jari-Matti Latvala/Miikka Anttila (FIN/FIN), Sébastien Ogier/Julien Ingrassia (F/F) and Andreas Mikkelsen/Anders Jæger (N/N) were ready to pounce in second, third and fourth place for a long time behind Kris Meeke/Paul Nagle (GB/IRL, Citroën) at the eighth round of the FIA World Rally Championship (WRC). But on the tenth special stage “Surkee 2”, world champions Ogier/Ingrassia were caught out; considering their difficult starting position, they had delivered a flawless performance up to that point. In a hairpin turn at kilometre 11.2, the Polo R WRC with car number one slipped into a ditch. It took Ogier and Ingrassia, along with a few Finnish fans, several attempts to push the Polo back onto the track – despite that, the result was 16 minutes of lost time.

Saturday’s rally action starts with an absolute highlight and the biggest challenge for the drivers and co-drivers: “Ouninpohja”. This most spectacular gravel track of the season, on which the top drivers tear through the forests around Jyväskylä at speeds of up to 200 km/h is to rally drivers what the Nürburgring-Nordschleife is to racing drivers – this year, the stage is slightly shorter, and will be driven in the opposite direction compared with 2015.

Jari-Matti Latvala, Volkswagen Polo R WRC #2
“It’s not easy for me to sum up today. It definitely got off to a bad start, but fortunately my slip on the fourth special stage didn’t have too much of an effect. But the puncture cost us a lot of time. After that we kept on improving our rhythm and threw everything at the task in hand. Unfortunately, it wasn’t enough for us to overtake Kris Meeke. The advantage of the starting position is too great here in Finland. But we aren’t going to give up, we will keep driving at the limit and trying to pile on the pressure. Tomorrow’s action includes the stage “Ouninpohja”. A lot can happen; nothing is for free here.”

Jost Capito, Volkswagen Motorsport Director
“The Rally Finland and its spectacular high-speed stages highlighted why people also refer to the rally as the Finnish Grand Prix. The drivers have to give everything here. Jari-Matti Latvala, Andreas Mikkelsen and Sébastien Ogier delivered a strong performance today. Sébastien Ogier’s slip-up can happen when you constantly have to drive at the limit like he does. As expected, like at the last five rallies, we are unable to fight for the win here under our own steam since the best-placed drivers in the championship are at too great a disadvantage due to the early starting positions.”

Time for lift-off! Volkswagen drivers in top form ahead of the Rally Finland