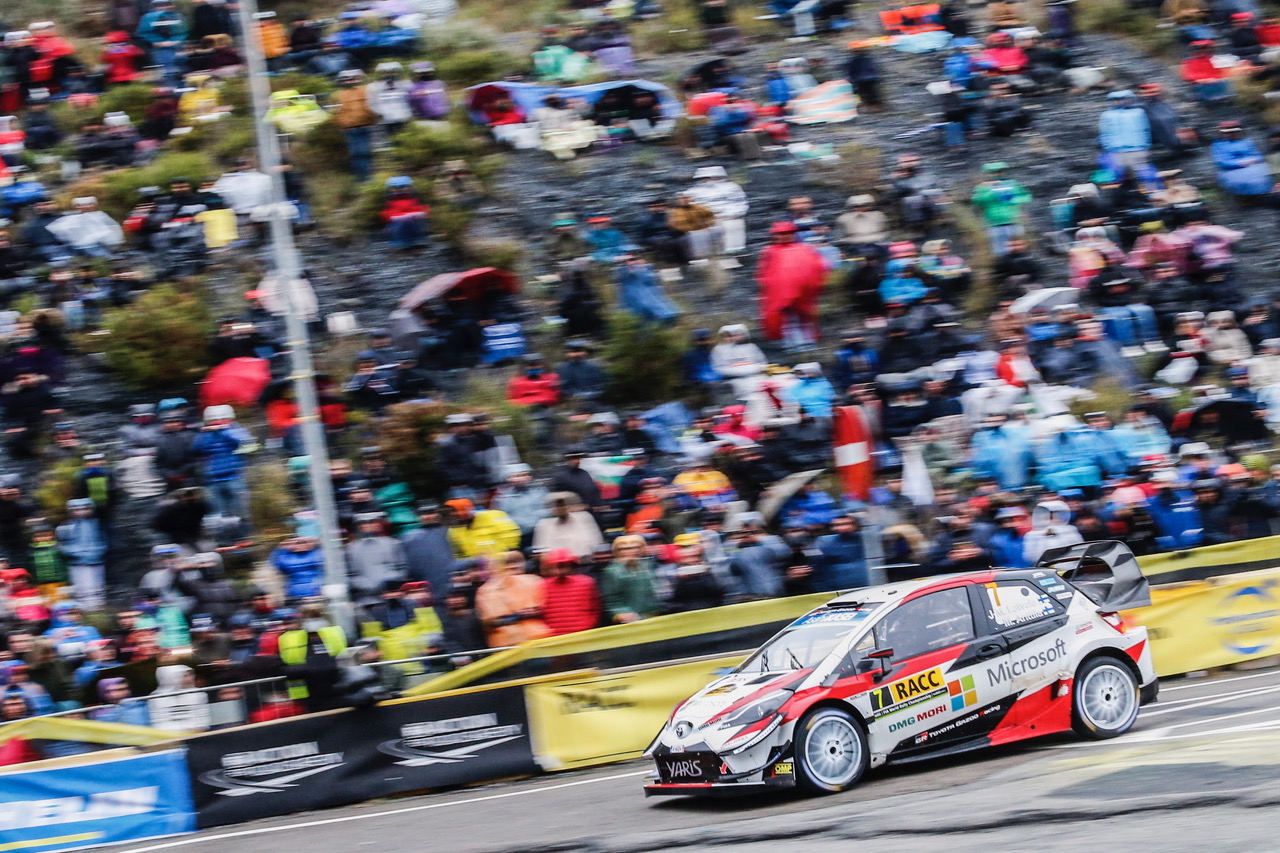 The Toyota Yaris WRC continues to lead the way as Rally de España made a dramatic switch from dry and dusty gravel to wet and slippery asphalt for the penultimate day. Jari-Matti Latvala completed a remarkable recovery from his Friday puncture to take the rally lead during the afternoon, after Ott Tänak’s march to a fourth win in five events was cruelly ended by a flat tyre of his own this morning.

The change of surface from gravel to asphalt for today was met with the further complication of heavy rain, creating a dilemma for the teams over tyre choice. The Toyota drivers opted to take the full wet tyre for the morning loop: a decision that looked inspired when Tänak and Latvala were quicker than anybody else on SS9, allowing Tänak to increase the lead he built during Friday to 32.9 seconds. However, on SS10 Tänak had to stop and change a damaged wheel and tyre. He finished the stage 1m43s down and dropped to ninth on the leaderboard.

Latvala and Esapekka Lappi kept up the strong form of the Yaris WRC with another one-two on the stage. Having been as low as 10th after his puncture, Latvala began the day fifth overall, and then moved up to second, just 0.3s off the lead. He duly claimed the lead on the first stage of the afternoon loop and then kept hold of it through difficult, muddy conditions. He has an advantage of 4.7s, with the top five drivers covered by 12.7s in an extremely close fight.

Lappi continued to show good pace and completed the day in seventh overall. Tänak is one place behind him, with his recovery efforts hampered by having the worst of the slippery road conditions.

Quotes:
Tommi Mäkinen (Team Principal)
“It has been a really eventful day full of mixed emotions. For Ott to get the puncture in the morning was obviously very disappointing when everything was again going so well for him. It has clearly had a very big effect on his bid for the championship. After this, it was great to see Jari-Matti take the lead, especially after his drama yesterday. We know that he has some very strong drivers right behind him, but he has great confidence in the car and it is performing well in all weather conditions, so I am sure that he can keep it until the finish.”

Jari-Matti Latvala (Driver car 7)
“To be leading after our issue yesterday is a great feeling and shows why you should never give up. The conditions were very demanding all day with the rain and lots of mud coming onto the road. The car was working well though and I think our tyre choices were good. In the last two stages I was a little bit cautious and we lost some time but we are still leading. It is going to be a big fight tomorrow. I have a five-time champion and a nine-time champion right behind me, but I will just focus on my own driving and keeping it relaxed: this will be the key.”

What’s next?
The final day consists of two asphalt stages close to Salou, Riudecanyes and Santa Marina. They will be run twice, totalling 61.7 kilometres, with the second pass of Santa Marina as the rally-ending Power Stage. Unusually for a Sunday, there will be a full 30-minute service midway through the loop.