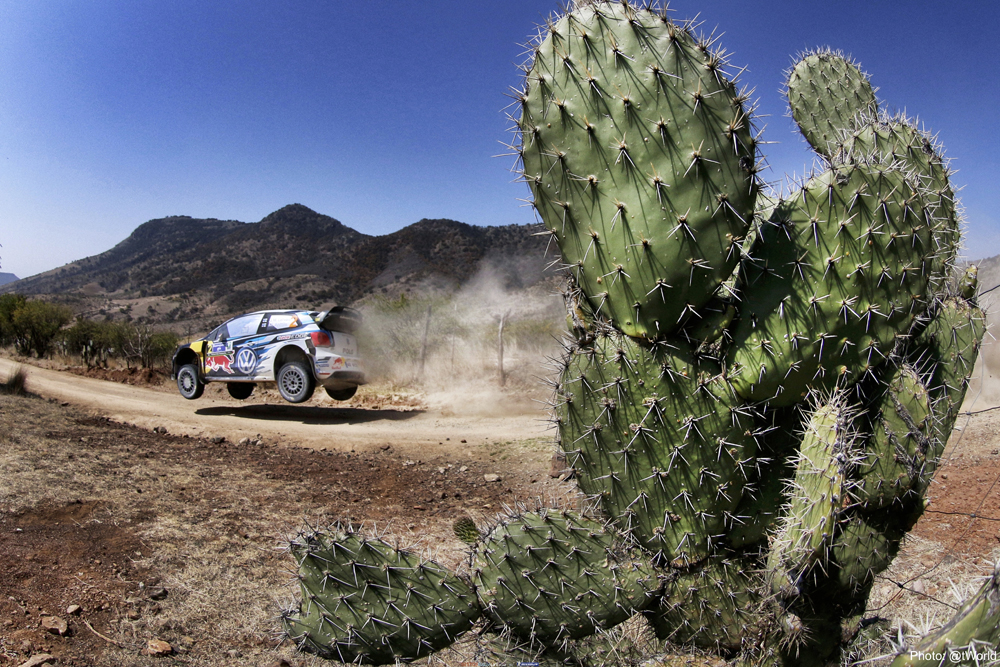 100th WRC start: Ogier/Ingrassia aim to mark the occasion with a win

Run of victories: Volkswagen can equal own record in the highlands of Central Mexico

The air gets thinner as you approach the summit: this is an apt description of the situation at round three of the FIA World Rally Championship (WRC). Reigning champions and current World Championship leaders Sébastien Ogier/Julien Ingrassia (F/F), and second-placed Andreas Mikkelsen/Anders Jæger (N/N), are facing a stern test at the “Roof of the World Rally Championship”. At the Rally Mexico (03–06 March) they will be starting from first and second place on the tricky gravel stages in Central Mexico. Their Volkswagen team-mates Jari-Matti Latvala/Miikka Anttila (FIN/FIN) are eighth onto the route, and all share a common goal: to secure a fourth consecutive win for Volkswagen at extreme heights of up to 2,746 metres above sea level, which would also equal the current record of twelve straight victories for the Polo R WRC. They must complete 399.71 kilometres against the clock over 21 special stages – including the longest and shortest stages ever contested by the Polo R WRC, at 80.00 and 1.09 kilometres respectively.

“We have to deal with extreme situations in Mexico,” said Volkswagen Motorsport Director Jost Capito. “The special stages are the highest of the entire season; we will face the longest stage of the year, and the shortest too in the tunnels of Guanajuato. We travel to Mexico with Sébastien Ogier and Andreas Mikkelsen in first and second place in the World Championship standings – this is anything but an easy task, as they must deal with the disadvantage of opening the route. Jari-Matti Latvala also has a good starting position in eighth. The chance of claiming a twelfth straight victory and equalling our own record gives us a bit more motivation. However, we will have our work cut out at the first gravel rally of the year, due to the very strong field there. We have never shied away from a challenge, and we are looking forward to Mexico.”

The most passionate fans in the rallying world, a thrilling start in Guanajuato and the widespread popularity of Volkswagen – the third round of the World Rally Championship season is not just a highlight for the team of Ogier, Latvala, Mikkelsen and co. From Thursday evening to Sunday afternoon, thousands of avid fans will line the routes of the special stages to cheer on the competitors. The official start of the rally takes place in the mining town of Guanajuato, a UNESCO World Heritage site. Featuring a web of tunnels and beautifully painted houses, this is one of the most fascinating and emotional events in the World Rally Championship.

Ever higher, ever further – extremes of height and distance

Onwards and upwards at the Rally Mexico: after 45.6 kilometres of the “El Chocolate” special stage, a long climb leads the World Rally Cars to a fast right and the highest point of the rally season. The “Roof of the World Rally Championship” is at 2,746 metres above sea level. The most challenging aspect of this is the gradual decrease in oxygen levels as the rally climbs ever higher: this means that there is less fuel for the combustion chambers of the 1.6-litre turbo engines. The engineers had to work hard to find a solution that makes the most of the circumstances without adversely affecting the stability of the engine, allowing them to counter a reduction in performance of up to 30 per cent.

The 54.21 kilometres of the “El Chocolate” stage already make this one of the longest stages on the calendar – but it is not the longest by far. Although the exact routes have not yet been agreed for all World Championship races, we can be sure of one thing: the 80 kilometres of Sunday’s “Guanajuato” stage make this the longest test of man and machine in the entire year, as it reaches the limits of what is allowed in the statutes of the FIA, the world motorsport governing body. “Guanajuato” has everything it takes to attain legendary status.

Sébastien Ogier and Julien Ingrassia have long been connected to the Rally Mexico by a special story. They started their World Championship career here in 2008, celebrating a victory in the Junior World Championship series. The return of the three-time world champions to Mexico in 2016 will mark their 100th start in the World Rally Championship. Ogier/Ingrassia can look back on many successes in the place where it all began, and have won the last three editions of the Rally Mexico. Their achievement in 2015 will live long in the memory: a smart choice of tyre and outstanding navigational and driving skills ensured that they celebrated a triumph that many had thought impossible beforehand.

Mikkelsen/Jæger on the hunt for first place

The closest challengers to Ogier/Ingrassia are fellow members of the Volkswagen team: Andreas Mikkelsen and Anders Jæger are 23 points behind the reigning champions after the rallies in Monte Carlo and Sweden. However, the two Norwegians, who have only been racing together since the start of the season, also have what it takes to win. Andreas Mikkelsen tasted victory in Spain, in the last World Championship rally that took place on the kind of dry gravel surfaces that we will see in Mexico. The Norwegian also has a good record in Mexico and finished third there last season.

Chance to make amends – Latvala/Anttila with a perfect starting position

Two chances to make up lost ground: Jari-Matti Latvala/Miikka Anttila are competing in the third Polo R WRC and aim to banish memories of a start to the season that has not gone as they had hoped. A starting position of eighth, which gives them the advantage over their team-mates, has done their chances no harm at all. Motivation and a desire to succeed will not be lacking as they look to improve on the zero points registered not just at the rallies in Monte Carlo and Sweden, but also in Mexico last year.

Unbeaten since the Rally Portugal in 2015 – eleven wins in a row. In Mexico, Volkswagen has the chance to extend that run of victories, having already triumphed in Portugal, Italy, Poland, Finland, Germany, Australia, France, Spain, Great Britain, Monte Carlo and Sweden. This would equal their own record, which was set between the Rally Australia 2013 and the Rally Finland 2014. To compare: the two longest winning runs were set by Volkswagen, with twelve and eleven consecutive victories, while the third-best record belongs to Citroën with eight wins in a row.

Quotes ahead of the Rally Mexico

Jari-Matti Latvala, Volkswagen Polo R WRC #2
“Mexico will be the first gravel rally of the year and the surface is normally pretty hard. This is covered with a layer of finer gravel, which makes the surface as a whole very slippery. The surface becomes cleaner and faster as more cars drive over it. This means that it is an advantage to start the stages later – as long as it is not raining. That can happen in Mexico, but it’s relatively unlikely. I had some bad luck in Monte Carlo and Sweden. Of course, it looks bad when you have two poor results in a row, especially at the start of the season. However, I am trying to stay optimistic and I’m sure that things will go better for me now. The trophies will only be handed out at the end of the season! I’m hoping that the weekend goes smoothly in Mexico.”

Number for the rally weekend in Mexico: 170

The Rally Mexico marks Miikka Anttila’s 170th outing as a co-driver in the World Rally Championship. This sees him become the third-most-experienced co-driver in rally history, after Denis Giraudet (181 starts) and Stéphane Prevot (173). Anttila will overtake one of the sporting greats in Mexico Daniel Elena, Sébastien Loeb’s co-driver, who has 169 starts in the WRC to his name. If Anttila goes on to contest the next eleven rallies in 2016, his total number of starts will also be 181 – the same number as Denis Giraudet. Incidentally, Miikka Anttila has contested 155 rallies alongside Jari-Matti Latvala.