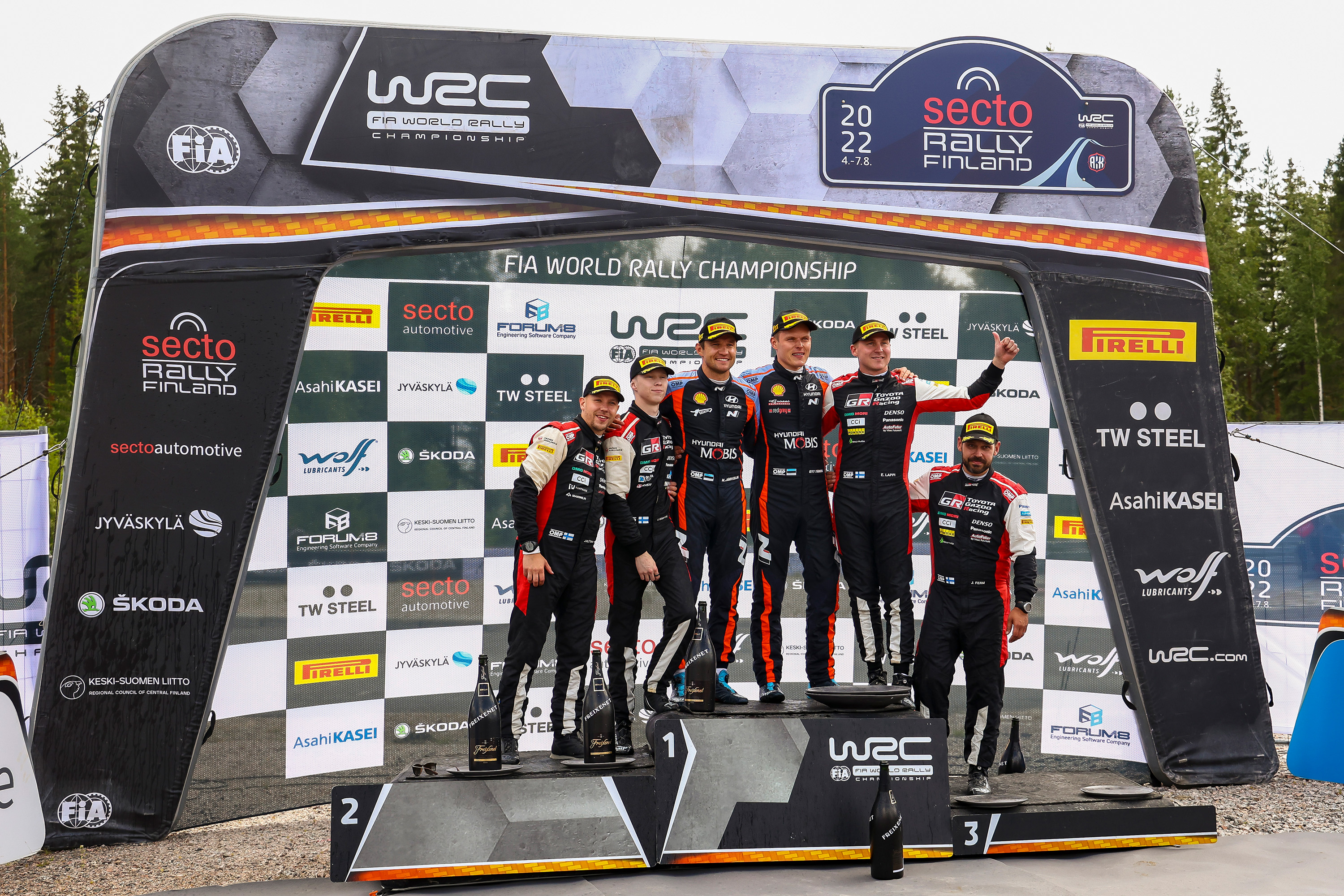 Tasked with sweeping the gravel roads around their hometown of Jyväskylä, Rovanperä and co-driver Jonne Halttunen ended Friday 21 seconds from the lead and fourth overall on a rally known for high speeds and narrow margins. Willed on by the local support in the spiritual home of rallying, Rovanperä was then rapid through the longest day of the rally on Saturday and fastest in six out of eight stages to climb to second overall and slash the gap to the leader to 8.4s.

He thus went into the final day still eyeing a famous home win, but was not in a position to risk everything while on course to strengthen his grip on the championship and ultimately had to settle for second place, only 6.8s behind Ott Tänak. He did however take the maximum five bonus points for the fastest time in the rally-ending Power Stage, which increases his advantage to 94 points with five rallies remaining.

The first Rally Finland for the new generation of hybrid Rally1 cars was the fourth-fastest WRC round of all time, and the incredibly close lead fight required drivers to have good confidence in their cars despite limited testing on such roads. The GR YARIS Rally1 HYBRID recorded the quickest time in 15 of the 22 stages.

Lappi led the Toyota charge through Friday and much of Saturday, before a freak incident with a rock that deflected up and damaged his windscreen, hampering visibility. He was to encounter further drama in the penultimate stage of the rally, which was heavily rutted. One such rut on the exit of a corner caused him to roll over three times. He was able to complete the stage while losing only 20 seconds and remaining third overall, but he and co-driver Janne Ferm had to carry out roadside repairs including removing the car’s windscreen and topping up a radiator. Incredibly, despite the obvious damage, they lost only 10 further seconds in the final stage to hold onto third by a relatively comfortable 16.9s and score their second podium of the season.

Like his team-mates, Elfyn Evans was also part of the thrilling lead battle for much of the weekend before having to make repairs of his own after damaging his suspension on Saturday afternoon. He and co-driver Scott Martin still finished fourth overall and took third in the Power Stage: Points that ensure TGR increased its manufacturers’ championship lead by one point to 88.

Takamoto Katsuta and co-driver Aaron Johnston ensured there were four GR YARIS Rally1 HYBRIDs inside the top six for almost the entire rally. By finishing sixth they continue their unbroken 2022 scoring run for TGR WRT Next Generation after Katsuta’s strongest performance yet on the roads around his Finnish hometown.

Jari-Matti Latvala (Team Principal)
“Of course, there is a little bit of disappointment not to win, but we have to see the bigger picture. Overall we still had a good weekend, with two cars on the podium, another in fourth and Taka in sixth as well. If you want to win this rally, you have to drive flat-out: you cannot think about anything else. Tänak was going all-out for the victory and he did a fantastic job. Kalle had to think about the championship. He still came very close to the win but he was doing a clever job, bringing the points home and still attacking in the Power Stage to increase his championship lead. It was incredible to see Esapekka make it to the podium as well after his roll.”

What’s next?
Ypres Rally Belgium (August 19-21) ran as a WRC round for the first time in 2021 but has a long-standing reputation as a classic and demanding asphalt rally, known for its fast but narrow farmland roads lined by large ditches.