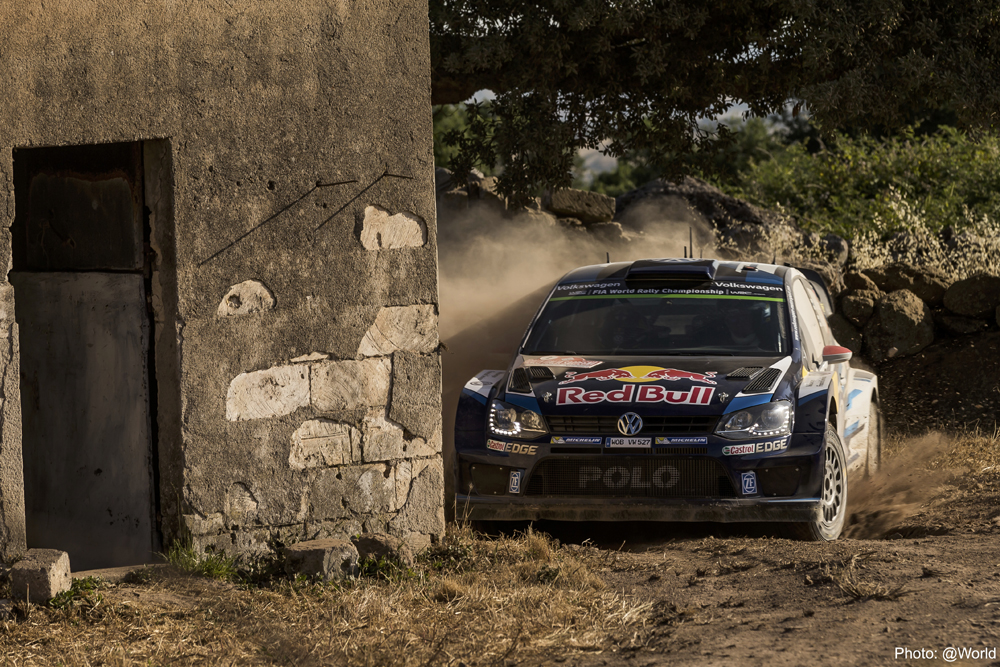 Volkswagen vs. Hyundai , Citroën and Ford in the top five at the Rally Italy

Volkswagen is within touching distance of the lead at the Rally Italy: Sébastien Ogier/Julien Ingrassia (F/F) and Jari-Matti Latvala/Miikka Anttila (FIN/FIN) are currently second and third after 136 of 394.63 kilometres against the clock. Five of the ten special stages so far at round six of the FIA World Rally Championship (WRC) have gone to Wolfsburg. In dusty conditions on the narrow, winding special stages, Volkswagen, Hyundai, Citroën and Ford were embroiled in a thrilling battle for the top five positions. The extremely hot and dry conditions the drivers faced on Thursday in Sardinia were replaced on Friday by muggy weather following thunderstorms during the night. The drivers and co-drivers face a Herculean task on Saturday: with 212.83 kilometres of special stage, day two on Sardinia is the longest day of the WRC season so far.

Ogier and Latvala exchanged blows for long periods on Friday. They were embroiled in an all-Volkswagen duel for second place until a puncture cost Latvala about 20 seconds. Prior to that, the gap between the world champion and last year’s runner-up in the World Championship had always been between two and five seconds. Going into the second full day of the rally, second-placed Ogier trails the leader Hayden Paddon (Hyundai) by 8.8 – 17.0 seconds ahead of his team-mate Latvala.

“The conditions were anything but easy today. The stages were nice, but narrow and very technical. The storm in the morning meant we had to adapt to a slippery route. Over the course of the afternoon I was able to find my rhythm and set some good times. Unfortunately, however, I then lost a bit of time when I made a slight mistake. I took a chicane in the middle of the stage too quickly and punctured a tyre, which cost me about 20 seconds. That does not make the task facing us over the next two days any easier. However, a lot can happen between now and the end, as the Rally Italy is one of the longest of the year. Compliments to Hayden Paddon, he was flying today!”

“A good start to the Rally Italy for Volkswagen. Sébastien Ogier and Jari-Matti Latvala fought hard for every tenth of a second today, and have both put themselves into a good position, from which to push for the win. The difficult and unsettled conditions out on the route made it really hard work. Seb and Jari-Matti will do everything in their power on the long day tomorrow to close the gap to the leader and, if possible, to take the lead. That is the goal. Andreas Mikkelsen was a bit unlucky today. He had to retire in the third Polo R WRC and will return tomorrow under Rally2 regulations. He will now go for broke on the Power Stage on Sunday.”

… a trophy that travelled with them. During the Rally Italy, the rear of the three Polo R WRCs bears a special greeting from one champion team to another. To honour VfL Wolfsburg’s victory in the DFB Cup final, the double World Rally Champions have adorned their cars with a special sticker. Two weeks ago in Berlin, Wolfsburg defeated Borussia Dortmund 3:1 in a thrilling final to lift the DFB Cup. “I followed the cup final on television,” said double World Champion Sébastien Ogier. “I obviously had my fingers crossed for Wolfsburg. After all, we are family. We are obviously trying to go even faster with the wolves behind us.”