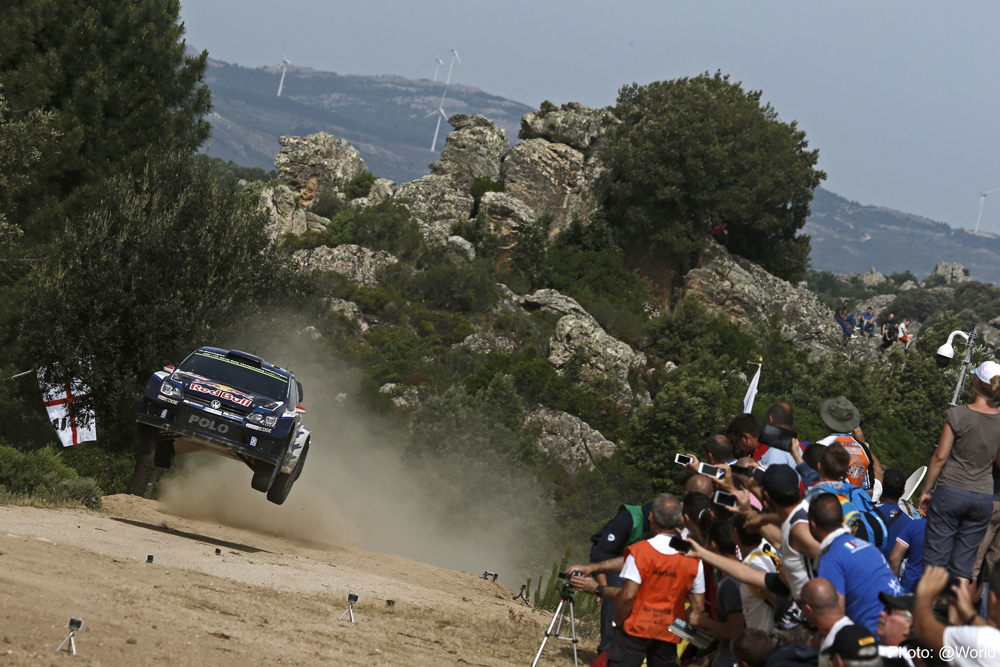 Jari-Matti Latvala/Miikka Anttila (FIN/FIN) and Andreas Mikkelsen/Ola Fløene (N/N) suffered setbacks. Latvala/Anttila started the day in third, but suffered tyre damage on the 13th special stage “Coiluna-Loelle” of all stages, and lost around 2.30 minutes when they changed the tyre. Then on the 17th special stage, they damaged their suspension on a rock on the driving line. Latvala/Anttila made provisional repairs to their World Rally Car between the stages and fought their way to the evening service in Alghero. However, they lost a total of eight minutes and dropped down into sixth place in the overall standings. Mikkelsen/Fløene also enjoyed a brief comeback under Rally 2 regulations. The 13th special stage also saw the Norwegians end their day early due to further suspension damage. However, the Volkswagen pair will go on the attack at the Rally Italy on Sunday once again under Rally 2 regulations

“Today started really well – with the best time of the twelfth special stage. Unfortunately, the tyre came off the rim after a jump on the following special stage. We lost almost 2.30 minutes changing the tyre. That was a major setback in the fight for the win at the Rally Sardinia. In the afternoon, there was a stone in the middle of the driving line on the special stage ‘Monti die Alà’. I wasn’t able to avoid it and damaged the rear left damper. We tried to repair the car as well as we could and were fortunate to make it back to the Service Park by ourselves. The whole thing is even more frustrating since I was doing well with the Polo R WRC throughout the rally and it was great fun chasing the drivers ahead of me. The Rally Italy still isn’t good ground for me. But we won’t give up and will do our best again tomorrow.”

“The whole team showed incredible fighting spirit today. Sébastien Ogier increased the pressure at the right moment and seized the lead brilliantly – even if we would have liked to see his fine duel with Haydon Paddon continue on the track. Jari-Matti Latvala was extremely unlucky, and tyre damage followed by suspension damage cost him a lot of time. But he limited the loss with maximum willpower and defended sixth place fiercely. Hats off. Unfortunately, Andreas Mikkelsen was forced to give up on his plan of getting to know the stages at rally speed for next season early on, but he has the chance to fight for points on the Power Stage tomorrow. It was a long, eventful day for everyone in the Volkswagen team – now we’re looking forward to the final on Sunday and want to bring home the win.”

… the legend “Monte Lerno”, “Micky’s Jump” and Jari-Matti Latvala’s contribution. On the longest special stage of the Rally Italy, the Finn and co-driver Miikka Anttila celebrated a special best time – the 400th for the Polo R WRC in the FIA World Rally Championship (WRC). A World Rally Car from Wolfsburg had taken on this 14th special stage with its famous crest “Micky’s Jump” 582 times. Latvala/Anttila celebrated this small anniversary in style. They took off for their jump at 83.2 km/h, landed after approximately 27 metres – and enjoyed a flight time of 1.3 seconds.