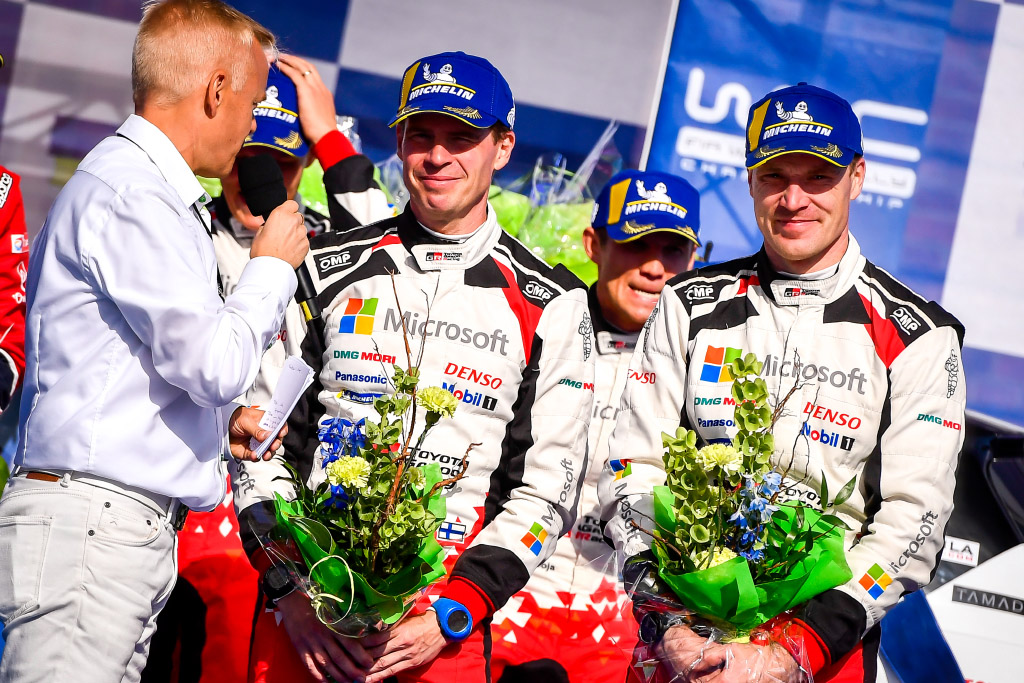 For the third year in a row, the Toyota Yaris WRC has won the fastest event on the FIA World Rally Championship calendar, Rally Finland. Ott Tänak repeated his victory from one year ago to increase his championship lead, while Jari-Matti Latvala finished third on his home event. It means the TOYOTA GAZOO Racing World Rally Team – which is based in Finland – maintains its record of getting two cars onto the podium on the event every year since its debut in 2017.

Tänak moved into the lead on Saturday following an intense battle with his team-mates, and took a lead of 16.4 seconds into the final day. He instantly increased that to 20s in the first of the final four stages, when he claimed his 200th career WRC stage win: also his 120th in the Yaris WRC and 50th so far this season.

Guided by co-driver Martin Järveoja, Tänak went on to set another fastest time in the rally-ending Power Stage as he clinched his victory, outpacing his nearest rival by 0.7 seconds to take the maximum 30 points away from the rally. His championship lead increases to 22 points.

Latvala and co-driver Miikka Anttila took their eighth stage win of the event on SS21 on their way to sealing their first podium finish of the season. The double podium haul helps the team to close up to the leader in the manufacturers’ championship.

Kris Meeke had fought with team-mates Tänak and Latvala for the rally lead until he retired Saturday morning. He restarted the event this morning, but had to stop again in the penultimate stage when he hit a rock on the inside of a bend and damaged his car’s front-left corner.

“I’m really really happy to be back on the podium here on Rally Finland. It has been almost nine months since I last had a podium, a really really long time. I think the opportunity was there to go for second place, but this time I think it was better not to take the risk. We really needed the points for the future, not just for myself but also for the team. Today I was more relaxed than yesterday afternoon and the performance was good. This result gives us more confidence to keep fighting for more podiums in the upcoming rallies.”