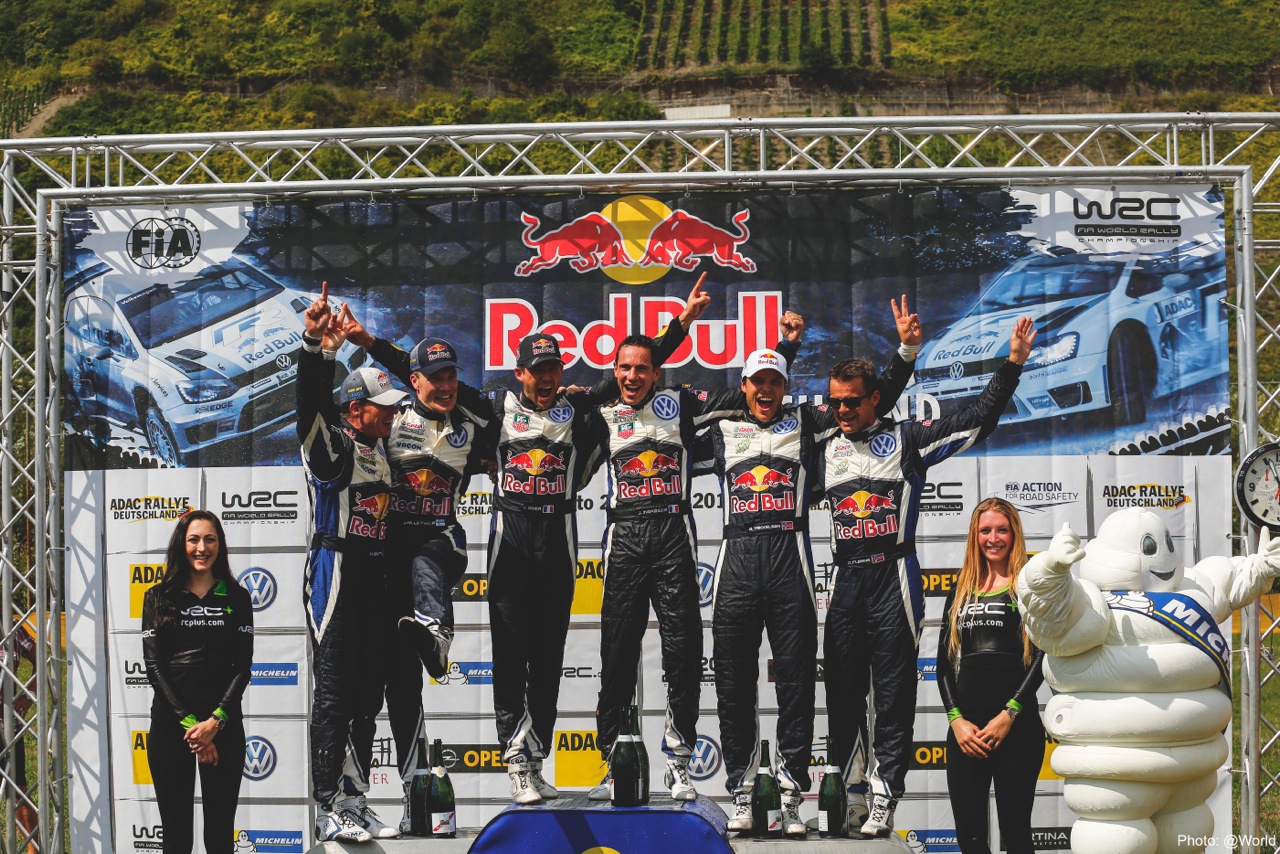 Ogier, Latvala and Mikkelsen unbeatable in front of over 225,000 spectators in Germany

Successful all over the world: Polo R WRC victorious at least once at every WRC rally

A Volkswagen driver, but which one? Drivers‘ title destined for Wolfsburg

Wolfsburg (23 August 2015). A one-two-three on home soil – a one-two-three for the history books: Volkswagen dominated the Rally Germany from the word go, and went on to secure victory for the first time. Sébastien Ogier/Julien Ingrassia (F/F) are the first duo to win the rally in a German car in the WRC era. The Wolfsburg-based manufacturer also finished second and third with Jari-Matti Latvala/Miikka Anttila (FIN/FIN) and Andreas Mikkelsen/Ola Fløene (N/N). Following the best-possible result, and the sweetest success – until today, the home event had been the only rally that Volkswagen was yet to win – one thing is now certain: this year’s world rally champion will once again be at the wheel of a Polo R WRC. Rally fans may have to wait no longer than the next round of the world championship in Australia to discover which of the three works duos comes out on top. Having claimed victory number 30 of their career, Ogier/Ingrassia now have a realistic chance of wrapping up their third Drivers’ and Co-Drivers’ championships in a row with rallies still to come – as do Volkswagen in the Manufacturers’ Championship.

“The one-two-three at the Rally Germany is a fantastic success for Volkswagen,” said Dr. Heinz-Jakob Neußer, Volkswagen Board Member for Technical Development, who received the trophy on behalf of the victorious manufacturer at the Porta Nigra in Trier. “Ideal preparation, maximum concentration and a huge amount of team spirit are what made this triumph possible. The Polo R WRC proved once again that it is the fastest car on asphalt too, and mastered the demanding routes in Germany perfectly. I would like to thank wholeheartedly all those who were involved with this important victory. I would also like to compliment the organisers: the ADAC and its thousands of volunteers put on a top-class event, with the support of the Bundeswehr. This is also underlined by the huge crowds of over 225,000.”

Volkswagen’s most global car, and the most successful in the history of the World Rally Championship: the Polo R WRC

Sweden, Mexico, Portugal, Greece, Italy, Finland, Australia, France, Spain, Great Britain, Monte Carlo, Argentina, Poland … and now: Germany. The one-two-three on the roads around Trier saw Volkswagen fill a small but important gap in the CV of the Polo R WRC. At the start of the week, the Rally Germany was the only rally that the World Rally Car from Wolfsburg had not yet won. Lady Luck had previously deserted the Volkswagen drivers at their home race. The manufacturer has now made its peace with the event in Germany, with the most global car in its fleet. And in true Volkswagen style: whenever Motorsport Director Jost Capito’s team has been under any kind of pressure, it has responded with a one-two-three: after the defeat at the 2014 Rally Germany, it bounced back with the first one-two-three in the manufacturer’s history in the WRC. The disappointment of Argentina this season was followed by the most successful rally with the Polo R WRC in Portugal. Volkswagen has now upped the ante with its fourth one-two-three, and the third of the season. And it achieved this feat in front of over 225,000 thrilled spectators over the course of the weekend.

The number 30 played a key role for Volkswagen at its home race. Not only did the Polo R WRC claim its 30th victory in 35 rallies, but it was also the 30th win of Sébastien Ogier and Julien Ingrassia’s careers. This win earned them a special place in the annals of the World Rally Championship. They have drawn level with Marcus Grönholm in the list of drivers with the most wins to their name, and are now tied with the Finn in second place. French drivers have now pulled ahead in their the ongoing battle with the Finns: France now has 175 wins to its name – one more than Finland with 174. Volkswagen drivers Sébastien Ogier and Jari-Matti Latvala are the only regular drivers from their countries in the World Rally Championship.

Nobody does it better: Latvala and Mikkelsen complete all-Volkswagen podium

For one it was a familiar feeling, for the other new territory: Jari-Matti Latvala/Miikka Anttila and Andreas Mikkelsen/Ola Fløene produced outstanding performances to join the Volkswagen party on the podium. All three Volkswagen duos were in a league of their own at their home rally. Jari-Matti Latvala/Miikka Anttila pushed Sébastien Ogier/Julien Ingrassia extremely hard in Germany and were always in touch with their fellow Volkswagen duo until the iconic “Panzerplatte” on the Baumholder military training ground made all the difference. Here, Ogier/Ingrassia left everyone in their wake – even their team-mates. This was podium number 19 with Volkswagen for Latvala/Anttila and the eleventh time on the rostrum for Mikkelsen/Fløene. In total, Volkswagen has now achieved 59 top-three results in 35 rallies.

Consolation: bonus points for Latvala/Anttila on the Power Stage

Never have bonus points for Volkswagen drivers been as overshadowed as at the 2015 Rally Germany. The goal of winning Volkswagen’s home event outweighed the efforts to score bonus points towards the Drivers’ and Co-Drivers’ championships on the final stage of the rally. Despite this, Jari-Matti Latvala won the Power Stage to claim three extra points.

Volkswagen has set up three match points in the race for the WRC titles thanks to the dream result in Germany. With a maximum 112 points still up for grabs in the Drivers’ and Co-Drivers’ championships, one thing is now certain: only a Volkswagen duo can be crowned world rally champion in 2015. Should Sébastien Ogier and Julien Ingrassia emerge from the Rally Australia with 84 of their current 93-point lead over their fellow Volkswagen crews of Jari-Matti Latvala/Miikka Anttila and Andreas Mikkelsen/Ola Fløene intact, the defending champions will claim their third title in a row. Volkswagen can also wrap up the Manufacturers title Down Under, regardless of other manufacturers’ results. Ogier/Ingrassia and Latvala/Anttila must defend 129 of their current 139-point lead in order to win a third championship in a row.

Quotes after day three of the Rally Germany

“It is a great day for Volkswagen and the entire team! A one-two-three is obviously the right way to bounce back from the results of the past two years. Everyone coped well with the pressure and worked hard to make this success possible. They all deserve a huge compliment from my side. Personally, I am very happy with my second place. After all, it is still an asphalt rally, which means it is not exactly a Finn’s favourite surface. I would obviously have liked to have repeated my success from Finland, but my team-mate Sébastien Ogier was simply too good this weekend. You just have to acknowledge that. I was able to extend my advantage over third place in the World Championship. That has to remain my goal. Whatever happens, I will push hard in the final third of the season.”

“A one-two-three at your home rally is certainly very special. However, given our history at this round of the World Championship, which was the only rally we had not won before today, it is more emotional than all the other victories we have celebrated. As always, every single person in the team was totally motivated and consciously did their bit to make this magnificent success possible. However, they actually managed to raise the bar even higher. The entire team – whether mechanic, engineer, logistician, chef, physio, doctor, management, or marketing and PR – has invested so much sweat and tears in this victory. That is what makes it so special. However, I would like to reserve my biggest compliment for our drivers and co-drivers: they withstood huge pressure, lived up to the enormous expectations and did an absolutely outstanding job. I think everyone at Volkswagen is incredibly proud of what we have achieved. I know I certainly am.”

… the icing on the cake. And it was digital: At 3:03 a.m. on Sunday, the Volkswagen Motorsport Facebook page exceeded the 5 million user mark, just in time to celebrate the perfect rally day. Since 1 January 2013, when Volkswagen entered the WRC with the Polo R WRC, the brand has not only multiplied its fan community a hundredfold, but has also reached more than 300 million contacts since then. In two and a half WRC seasons, the Volkswagen brand’s most successful Facebook presence has also achieved more than 60 million direct interactions via this channel.

… “novice driver” Andreas Mikkelsen. Last year’s third-placed driver in the WRC faced an unusually difficult obstacle when trying to register a car in his chosen home of Monaco. Since it was the first time that Mikkelsen had attempted to register a car, his insurance company asked for a letter of recommendation – Mikkelsen is regarded as a novice driver in Monaco. So the Norwegian asked his employer, Jost Capito, whether he would attest to his “driving ability”. And what was the Motorsport Director’s humorous response? It was already settled, he had even enclosed a photo of Mikkelsen’s accident in Finland…

And, last but not least, there was …

… a thank you to the Volkswagen lucky charms. The footballers from VfL Wolfsburg – Klaus Allofs, Dieter Hecking, Maximilian Arnold and Christian Träsch – and the rockers from “Revolverheld” were on site to keep their fingers crossed for the Volkswagen team. See you soon!