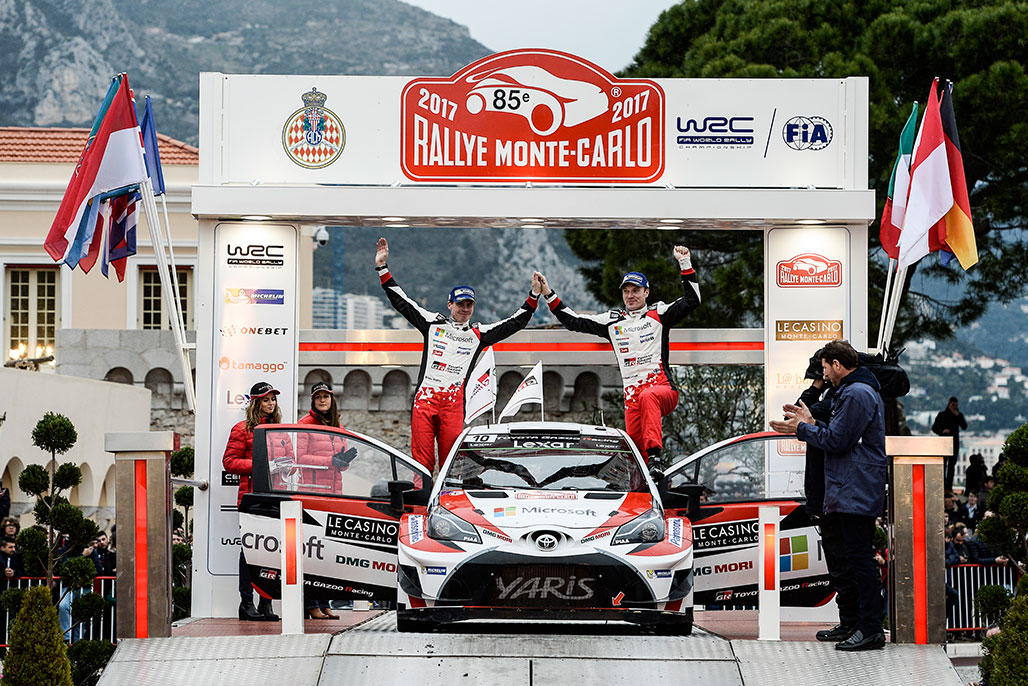 TOYOTA GAZOO Racing has finished Rallye Monte-Carlo, the oldest and most prestigious round of the FIA World Rally Championship, with a result that has surpassed all expectations on the team’s debut: second overall with Jari-Matti Latvala and Miikka Anttilla. Juho Hänninen and Kaj Lindström also finished the rally, in 16th place, after rejoining on Saturday. This collective result ensures a double score in the manufacturers’ standings for the brand new Yaris WRC, placing TOYOTA GAZOO Racing second in the championship after only its first event.

The final day of the rally was scheduled to cover four stages over the most famous part of the route: the legendary Col de Turini. This became three stages after the penultimate test was cancelled for reasons of spectator safety. The route was largely dry, but there were still some slippery sections, with rain and snow reported on the stages. Juho crowned his excellent performance with third overall on the Power Stage today, which earned him three driver championship points: so Toyota has scored in both championships on its debut.

“I’m very happy. This result goes a long way beyond our expectations, as this is really only a development year. We didn’t have much experience but our rally was nearly perfect: both crews reacted very well to the changing circumstances and they were able to set stage times in the top three, which is very encouraging. Jari-Matti had a problem with a sensor during the rally, which was distracting him, and there was a worry that if he stopped the car in the stage he might not be able to restart. But how he coped with this was very impressive. A big thank you to the team for all the hard work so far. We still have a lot of work ahead but this is a good start.”

“I’m so happy that we have finished the first rally of our return with a result that is better than expected, as we aim to make ever-better cars. I’d like to thank all our team members and crews for their hard work, as well as all the fans who have been waiting for us to come back for 17 years. It’s clear that we have good potential, but our competitors are very strong and we still have plenty of work to do to be regarded as their rivals in a real sense. We’ll be doing our best to get there!”

“I am so happy with the result, although I am sorry for Ott Tanak, who was second before he had a problem. If you had told me before the start of the rally that this is where we would finish, I would never have believed it. In fact, this equals my best-ever result on this rally. The last stages were very difficult, like the whole rally was in fact, and my main priority was to look after the tyres. On the final stage there was some snow so it was hard to find the grip. It’s been an amazing rally, and it’s been fantastic to feel all the support of the fans in particular.”

(Results as of 16:30 on Sunday, for the latest results please visit www.wrc.com)

The next round of the FIA World Rally Championship is Rally Sweden from 9-12 February. Sticking with the winter theme, this rally is held exclusively on snow and ice, with the cars running on specialised snow tyres that feature long studs designed to grip into the ice and provide traction. With temperatures that have been known to drop below minus 20 degrees centigrade, it will be another tough test for the brand new Toyota Yaris WRC as it continues its development.