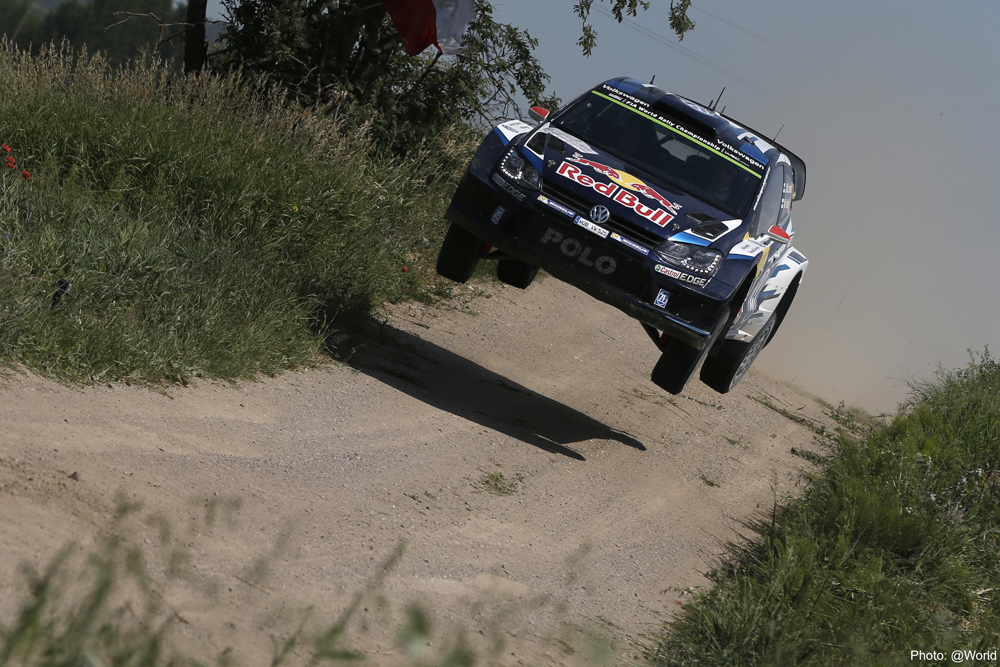 Wolfsburg (24 July 2015). All four wheels in the air 77 times, a pure flight time of more than half a minute – the legendary stage ‘Ouninpohja’ returns to the ‘Neste Oil Rally Finland’. What the Nürburgring-Nordschleife is to racing drivers, this full throttle special stage through the forests around Jyväskylä is to rally drivers; which is where the eighth event of the FIA World Rally Championship (WRC) season will be held. The Volkswagen duo of Sébastien Ogier/Julien Ingrassia (F/F), who, as championship leaders, want to bring the Polo R WRC with car number one to victory once again in 2015, have held the record for speed on ‘Ouninpohja’ since 2013.

However, two of their many main rivals are their Volkswagen team-mates: Jari-Matti Latvala/Miikka Anttila (FIN/FIN) line up with home advantage and as last year’s winners; Andreas Mikkelsen/Ola Fløene (N/N) feel particularly at home on pacy tracks and are the double world champions and current leaders of the standings from France’s closest rivals in the drivers’ and co-drivers’ standings. Volkswagen are also unbeaten in the WRC rallies with the highest average speeds – Finland and Poland – since 2013 and head to the “air race on four wheels” with a healthy dose of self-confidence.

“Many like to describe the Rally Finland as ‘Formula 1 in the forest’,” said Volkswagen Motorsport Director Jost Capito. “At Volkswagen we believe that ‘air race on four wheels’ is also an accurate description of the special features of this iconic rally. There is nowhere else in the rally world that the drivers experience as many crests and thereby as many long jumps. And there is nowhere else with gravel tracks at such high speed in the forest that are as narrow as in Finland. It’s all about driving precision here, about the drivers trusting their World Rally Cars, and about a perfect set-up. With Sébastien Ogier, Jari-Matti Latvala and Andreas Mikkelsen, we not only believe that we have the best drivers, but with the Polo R WRC, we also have the best technical package for the Rally Finland. And that’s exactly what we want to prove for the third time in a row.”

The most spectacular rally ever – Finland’s festival of flight

The Rally Finland forms the essence of what rallying is all about for real fans – formerly held as the ‘Rally of 1000 lakes’, the rally around the student city of Jyväskylä has been the Finnish event in the World Rally Championship for more than four decades without interruption. Alongside the Rally Monte Carlo, it is the most prestigious event on the calendar; only the Rally Great Britain has been held just as often – 41 times – as a WRC rally. It earned its reputation as the “Gravel Grand Prix” with its typical track layout of fast and flowing gravel tracks, which in the gravel events are the closes to those in the asphalt rallies. And of course through its incredible average speed: the Rally Finland appears eight times in the top ten fast-paced rallies of all times – and occupies the top four spots.

‘Ouninpohja’ and the classics – lots that is familiar, nothing that is ordinary

Drift, jump, full throttle – the WRC drivers experience the ultimate adrenalin rush at the Rally Finland in general, and on the special stage ‘Ouninpohja’ in particular. On the 33.01-kilometre layout of the 2013 version of the legendary special stage, the World Rally Cars took off exactly 77 times and were in the air for a total of 30.4 seconds – unrivalled by the other special stages in the rally world. Markko Märtin achieved the furthest jump in the history of the WRC back in 2003, when he travelled 57 metres at 171 kilometres per hour. However, another record on ‘Ouninpohja’ went to Sébastien Ogier in 2013, when he completed the stage in the Polo R WRC with an average speed of 130.75 km/h.

As well as the return of ‘Ouninpohja’ after a year off, the 2015 Rally Finland has many classics on offer – including ‘Himos’, ‘Jukojärvi’ and others. Not only music to the ears of the Finns: exactly 320 kilometres of special stages will be held over 20 special stages in 2015. The only entirely new parts of the rally are the Power Stage ‘Myhinpää’ and some short sections of other stages.

Finns versus Frenchmen – who is the favourite around the 1000 lakes

France took the lead in the eternal duel between the great rally nations for the first time in the recent history of the World Rally Championship. With his win at the Rally Poland, Sébastien Ogier increased France’s tally to 174 victories, Finland is close behind with 173 successes. Naturally it is a question of honour: Jari-Matti Latvala wants to even the score for his home country of Finland at his home rally. “JML” is in with extraordinarily good chances from a statistical perspective – he is the only one of the current WRC drivers to have won the rally twice. On top of this, Latvala narrowly got the win last year. The advantage of just 3.6 seconds saw this victory – incidentally in the ever-gripping duel with Sébastien Ogier – go down as one of the ten closest results in the history of the WRC.

Statisticians take note: round figures ahead at the Rally Finland

The Volkswagen drivers have a few statistical milestones in sight at the Rally Finland. For example, Jari-Matti Latvala is not only aiming for the 400th stage best time of his career – “JML” only needs to get another three to reach this round number –, he is also hoping for the 50th podium spot of his career. If Sébastien Ogier were to win, he would draw level with Marcus Grönholm in the all-time winners list, celebrate the 30th win of his career and thereby move into second place behind his fellow countryman and record world champion Sébastien Loeb. In pursuit of this goal, three more stage best times would be enough to win the 250th special stage in the Polo R WRC. The Volkswagen drivers are also aiming for the next milestone in the Volkswagen domain of the Power Stage: the 125th bonus point in the 33rd Power Stage since January 2013 is there for the taking in Finland – they currently have 122. On the Power Stage, bonus points for the drivers’ and co-drivers’ championship are awarded to the top three duos on a 3-2-1 basis. Volkswagen drivers have won a Power Stage a total of 25 times to date.

Jari-Matti Latvala, Volkswagen Polo R WRC #2
“Finland is one of the most demanding and fastest rallies on the WRC calendar. Every jump is to be treated with caution. My team-mates Sébastien Ogier and Andreas Mikkelsen are currently in great form and will no doubt give it their all to get the win. But I want to do the same. That makes it even more important for me to drive with full concentration right from the first second and to fight for every metre. My goal: to experience this emotional moment on the winners’ podium from last year again. The Rally Finland was incredible for me back then. I will never forget the moment that I stood on the podium, held the winner’s trophy in my hand and all my fans were cheering me. The Rally Finland is my home event, which naturally gives that extra bit of motivation, but also puts you under pressure. In these moments my mental coach Christoph Treier is particularly important to me. He helps me to line up calmly and with a level head.”

We are in the middle of the ‘speed weeks’ of the WRC, Poland is now behind us and we are looking ahead to Finland – what makes the Rally Finland magical for an engine engineer?
Phil Barrett: “Quite simply: it is all about speed. Finland is one of several rallies in which the engine performance is more crucial to the performance of the overall package of the World Rally Car than in other places. In addition to Finland, other rallies where this is the case include Mexico and Sweden. On top of this, Finland has the longest history and greatest tradition as a full throttle rally. Finland is the greatest challenge for the engine department, so to speak.”

What are the exact demands that the Rally Finland places on engines?
Phil Barrett: “You need as much horsepower as possible, that much is clear. But there is another, lesser known effect. According to the regulations, the speed of an engine must not exceed 8,500 rpm. Getting as close as possible to this value without exceeding it on the long, full throttle sections and on the many jumps sounds easier than it is. If the rpm is exceeded, an FIA system intervenes – extremely sharply and abruptly. So you need to make sure that you keep the maximum speed as high as possible without this system intervening. However, you can also lose five kilometres per hour at top speed if the engine control is too conservative.”

The Polo R WRC holds the record for speed on ‘Ouninpohja’. Do you think it will be broken this year?
Phil Barrett (laughs): “I would love to answer with a definite ’yes’. But I think that it depends on the circumstances of the rally. If it is as close again as it was in Poland, all the drivers will go at full throttle without compromise. And as far as the Polo R WRC is concerned, it has improved in all areas since 2013, which is when ’Ouninpohja’ was last held. The engine has developed further, but so have the aerodynamics and the chassis. The chassis in particular is what has improved the overall package – so in theory it is possible.”

The 1.6-litre turbo engine in the Polo R WRC has to work extremely hard at the Rally Finland. At the maximum speed stipulated by the regulations of 8,500 rpm, each of the four pistons changes its direction of movement 17.7 times per second. At the maximum rotational speed, the pistons cover a total distance of 313.64 metres per minute.