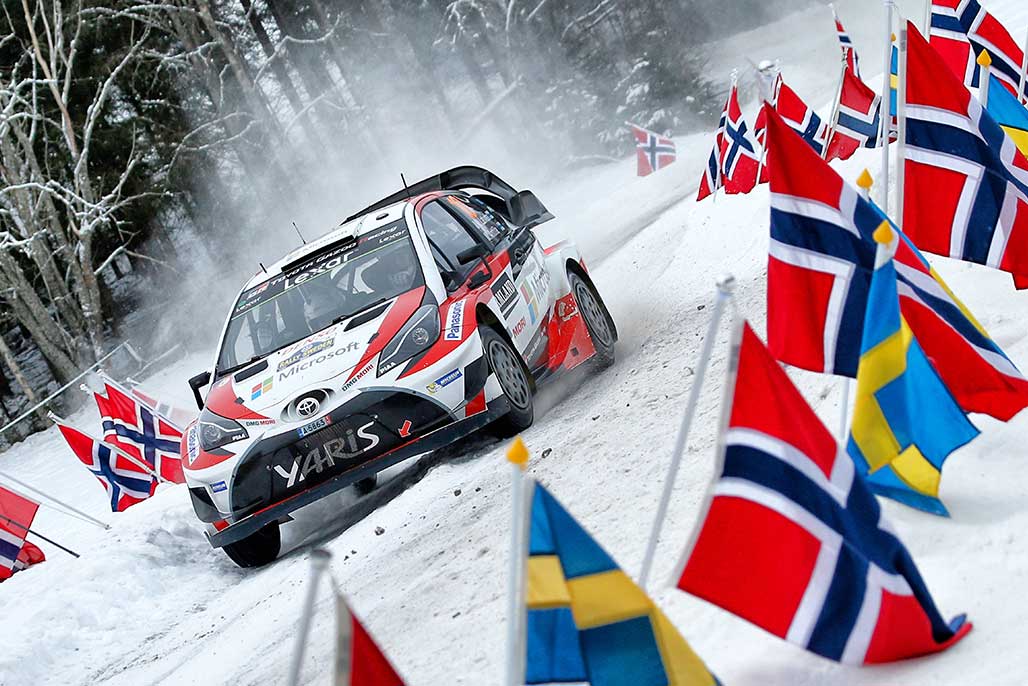 Jari-Matti Latvala has finished the longest day of Rally Sweden in second place after a strong performance during which the Finn also managed to lead the rally. Juho Hänninen had to retire after SS5, on which he hit a tree with the front of the car, damaging the cooling system. The team will have just three hours to fix his Yaris WRC tonight so that he can re-start tomorrow.

Jari-Matti showed both speed and consistency, having never been out of the top two overall all day. In the first stage this morning he felt the car bottoming out too much, but some suspension tweaks soon put him back on track for the rest of the day. Juho also made a solid start after two years away from Rally Sweden, but was unlucky to be caught out in a tricky place that also claimed some other victims.

“Of course I’m pleased but we must keep our feet on the ground and remember that the hardest part is still to come. Tomorrow I think road conditions will be more equal for everyone, so that will be the biggest test. The reliability and performance has been good so far, especially with Jari-Matti. I think we should be able to get Juho out again tomorrow as well: he made only a small mistake that had big consequences. This is all part of the learning process, which is why we are here this year.”

”I’m very happy with our progress today. We were able to make some adjustments to the car ourselves after the first stage today, and then it felt a lot better. I only had one stage I was not happy with, which was SS7. Although we were quick there in the morning, in the afternoon I lost confidence and started over-driving. That cost me a lot of time, which is a pity. But I cannot complain: tonight’s end result is very good and the car has been perfect. Now we stay concentrated for tomorrow.”

Two-time world champion Marcus Grönholm from Finland, who drove a Toyota between 1990 and 1998, always said that his very favourite rally was Sweden. In fact, he loved it so much that when he opened a restaurant after his retirement from driving he named it Sagen, after his favourite stage.

After a day spent largely in Norway, tomorrow’s itinerary returns to Sweden. On the menu are seven special stages, starting at 08:08 and totalling 125.38 competitive kilometres. The day’s final stage, beginning at 17:45, is the Karlstad super special: identical to the one that opened the rally last night.