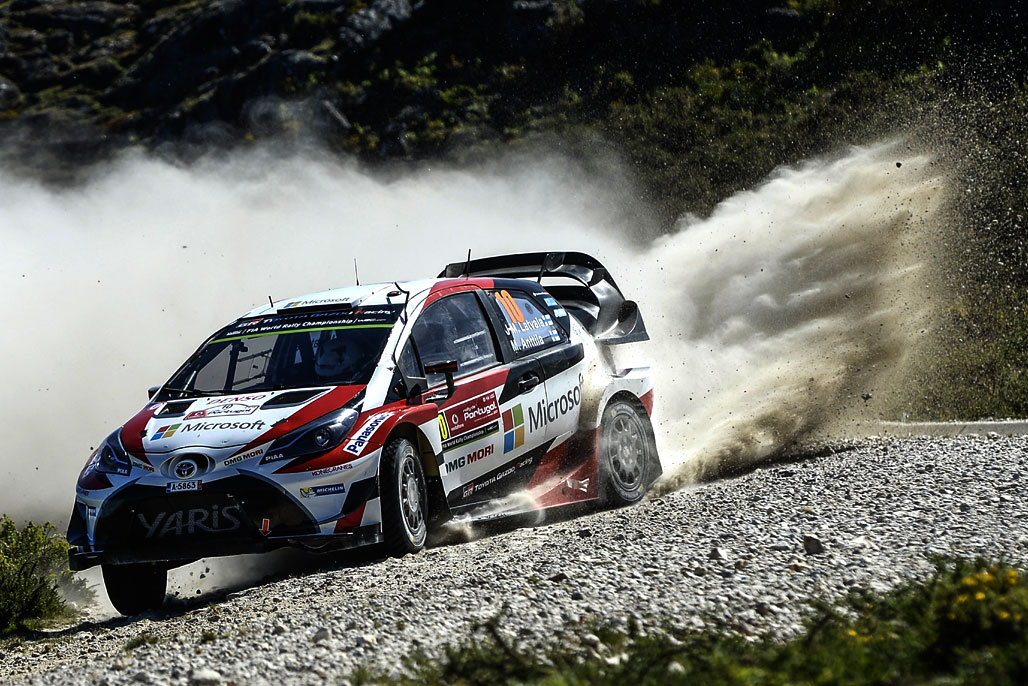 With just one day of Rally Portugal left to run, all three Toyota Yaris WRC drivers are in contention for points despite each having to contend with different issues during Saturday’s six stages. Juho Hänninen ends the day in seventh place, Jari-Matti Latvala is ninth, while Esapekka Lappi is 11th, having dropped several minutes on the final stage.

Latvala was battling a stomach upset today but still managed to set some competitive stage times in the top three. Hänninen had his progress interrupted when his car briefly stopped in the stage this afternoon, and Lappi lost further time when he ran wide on some loose gravel and damaged the right-rear of his car, along with suspension and brakes.

“Another very tough day that was hard on the tyres and the car. Conditions today were quite different to yesterday, a harder base with more sandy gravel. On the positive side, we have three cars with us at the end of the day, challenging for the points. Esapekka was doing very well; it hasn’t taken him long to find the right pace. What happened to him on the last stage was a really small mistake: I don’t blame him at all and I believe he will learn from this. Again, we have seen that the speed of our car is very encouraging; Jari-Matti set some good times even though he was a bit sick and without the roll yesterday I am sure he could have been challenging at the very front. Juho also did another solid and fast job as we expect from him, despite one small problem that we will investigate, and so he leads the way for us again tonight.”

“I started the day not feeling very well: I had a stomach upset that made it difficult for me to keep any food down, but it’s been getting better and better. The really positive thing about today is that we’ve definitely improved the car for the second passes over the stages, especially the suspension. Everyone has done a lot of good work so compared to yesterday, it’s certainly going in the right direction. We’ve had one or two small niggles during the day but no major problems. The roads were more solid today, which made the cleaning effect bigger, but this also meant that they were not damaged as much in the afternoon. This rally has been a good learning experience for us so far.”

Portugal was the home to one of the most legendary stories in World Rally Championship history: Walter Rohrl’s foggy drive on the epic Arganil stage, south of Porto. It came down to a final-stage battle between Rohrl and his Fiat team mate Markku Alen (still the most successful driver in Rally Portugal history, with five wins behind him). But this time it would be Rohrl who triumphed, thanks to a time over the 42-kilometre Arganil stage that was a full five minutes faster than any of his rivals, despite very little visibility with full fog. Rohrl’s secret? He had practised at night for the stage (back then, recce was unlimited) and compiled especially detailed pace notes.

The final leg of the rally tomorrow is the shortest of the whole event, with just four stages and 42.93 competitive kilometres. But there’s no service halt in between them and the itinerary also includes the most iconic stage of the rally, Fafe, which features a huge jump that attracts thousands of fans. The first car leaves service just before 08:00, with the winner expected at the finish in Matosinhos at 14:20.

ALL THREE YARIS WRCS IN TOP 10