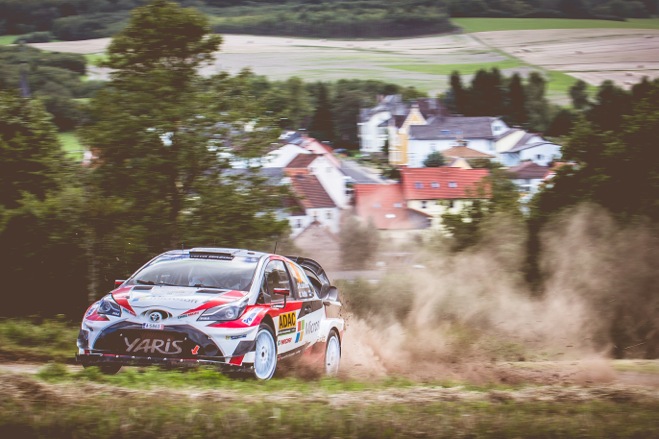 TOYOTA GAZOO Racing World Rally Team enjoyed a great final day on Rallye Deutschland with two more stage wins, taking its total this weekend to five and demonstrating the progress that the team is making with the Yaris WRC on asphalt. Juho Hänninen took his second stage win of the event as he finished a superb fourth overall. Jari-Matti Latvala finished seventh, while Esapekka Lappi also scored a stage win to end his challenging event on a high note.

Hänninen began the day by winning the Losheim am See stage to lift him up into fourth place, a position which he then cemented over the final three tests. It completed a great performance from Hänninen on a rally he last contested in 2011. On the next stage, St. Wendeler Land, Lappi took a satisfying stage win. The Rally Finland winner had been forced to retire from the opening leg after damaging his car’s suspension and then struggled for speed after restarting yesterday, but he carefully analysed his performance overnight and made a clear improvement. Latvala, who won two stages himself earlier in the rally but was delayed by a technical issue, made it a Toyota one-two on the stage. Lappi and Latvala later finished second and third on the rally-ending Power Stage to claim four and three bonus points respectively, with Lappi missing out on the win by only 0.2 seconds.

“In the first stage this morning I was a little bit slow; I wasn’t quite awake yet. The second one went really well. I liked the stage and I had a good feeling about it going into the Power Stage. Unfortunately I had a touch in a left-hand corner very early in the stage, and I didn’t push because I was afraid I had a puncture. Still, it’s nice to get some points after the problem earlier in the rally.”

2017 FIA WORLD RALLY CHAMPIONSHIP FOR DRIVERS AFTER ROUND 10:

2017 FIA WORLD RALLY CHAMPIONSHIP FOR MANUFACTURERS AFTER ROUND 10:

Rally de España forms the 11th round of the World Rally Championship on October 5-8. It is the only true mixed surface event of the season: the opening day will take place mostly on gravel, before the other two days are run on smooth and fast asphalt roads. The teams will have to convert the cars from gravel to asphalt specification during an extended service on Friday evening.